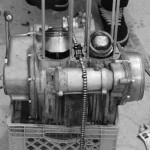 I ended up being able to get the title for it!!! (long story), so now my friends and I decided to open up the engine and figure out what’s wrong with it.

After doing some riding tests, we found that the bike ran pretty fuckin good, but it smoked super bad out of the left side. So… we did some compression tests and found that each side was well within spec. I naturally assumed that if oil was getting in the combustion chamber, but the compression tests were good, that a valve seal was leaking oil. 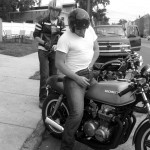