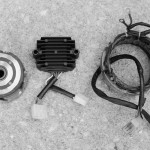 – – – Scroll to bottom above the comments for an update…

Jesus Fucking Christ. My rotor shit out again yesterday.
Where do I start? This is going to be a long post.

So, the 79-82 Honda cb650 has a shitty charging system.
I realized I’ve never made a post explaining in detail. So, here it goes…

Let me back up a step… In the earlier 70’s, Honda’s had a solid magnetic rotor and the housing was filled with oil. This was good. Honda’s rarely ever had charging problems… and if they did… it was because the regulator rectifier went bad, which was easy and cheap to replace.

In 1979, Honda tried a different type of charging system for 4 years. They went with a rotor which was wound up with wires inside of it, and the housing was not filled with oil. Shit would get hot. Real fuckin hot. Long story short… the rotor would often shit out. My rotor shits out about once a year.

Pic below. Left to right.
new rotor, new regulator rectifier, new stator
These are the 3 components in the charging system. 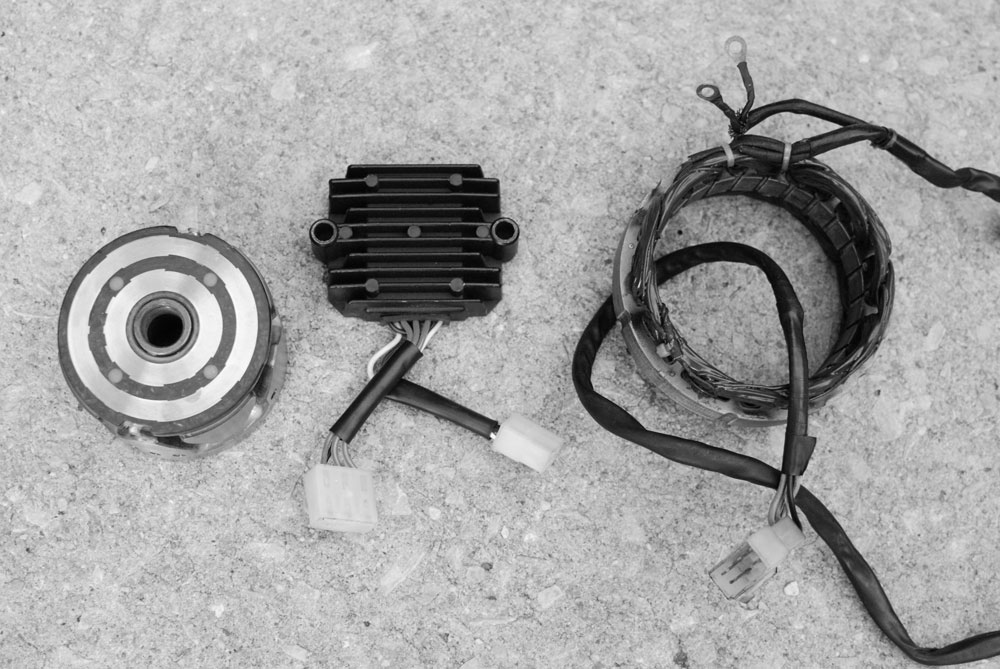 This is the way the used parts all sit on the bike. (I already took the rotor locknut off) 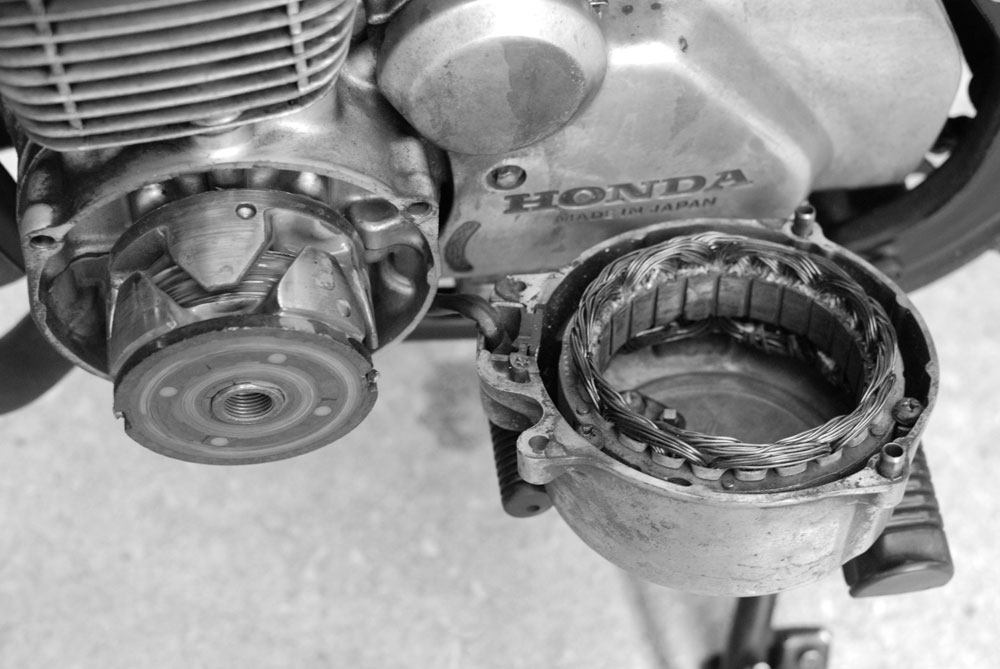 Where it all plugs in under the seat. 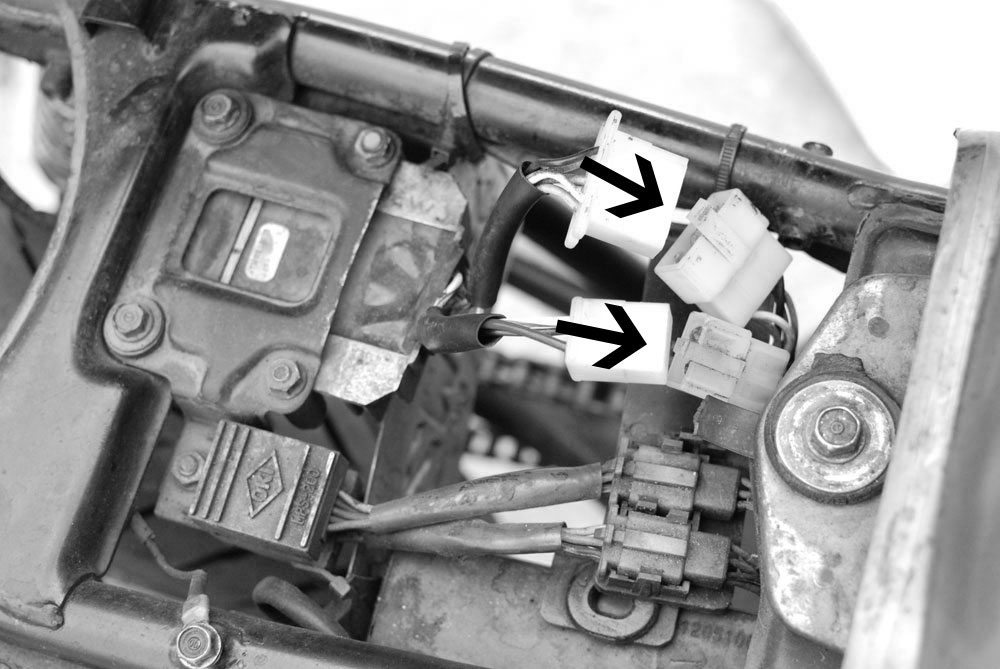 Ok… this is where it gets tricky.

The main thing that will go wrong with the charging system is the rotor.
There are 2 different ways that the rotor will shit out:

1)
The wire on the rotor will physically snap as seen in the pic below. Once the wire snaps, no more charging at all… nothing. It will instantly start draining the battery. You’re not going to make it home. Battery will shit out in about 10-20 mins. Maybe less. 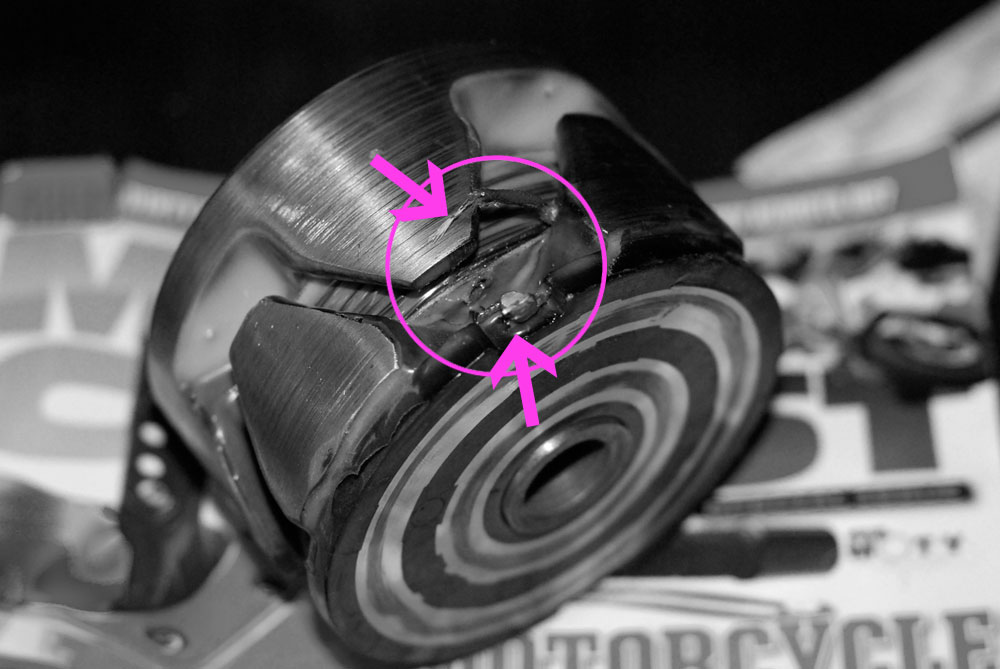 2)
The wires will visually appear fine, but the reading will be way above the spec 4-6, as seen below. Apparently that means there is an “open” in the circuit. Not sure what that means. Anyway… if this is the case and there’s an “open”, the charging system will still kinda work, but it will be erratic. It won’t directly start draining the battery… at least not right away. It will range from 9 > 12 > 7 > 10…. get what I mean… it will be erratic, rather than holding at the 13.5 – 14 like it should be. So… if this happens, you have a good chance of at least making it home before the cycle shits out completely. 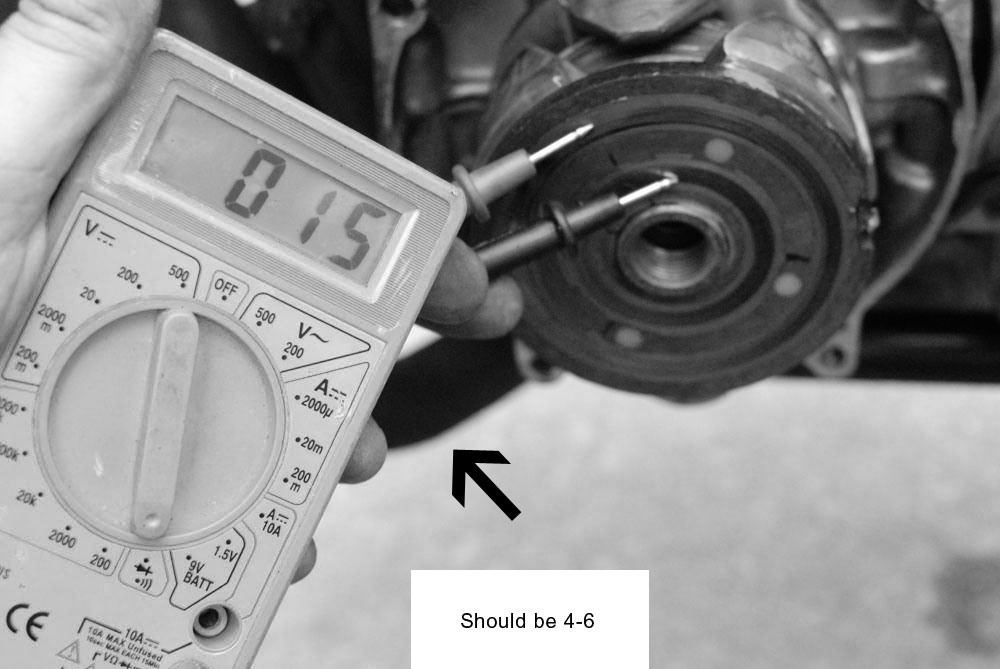 Check out what the Haynes manual has to say about it all. 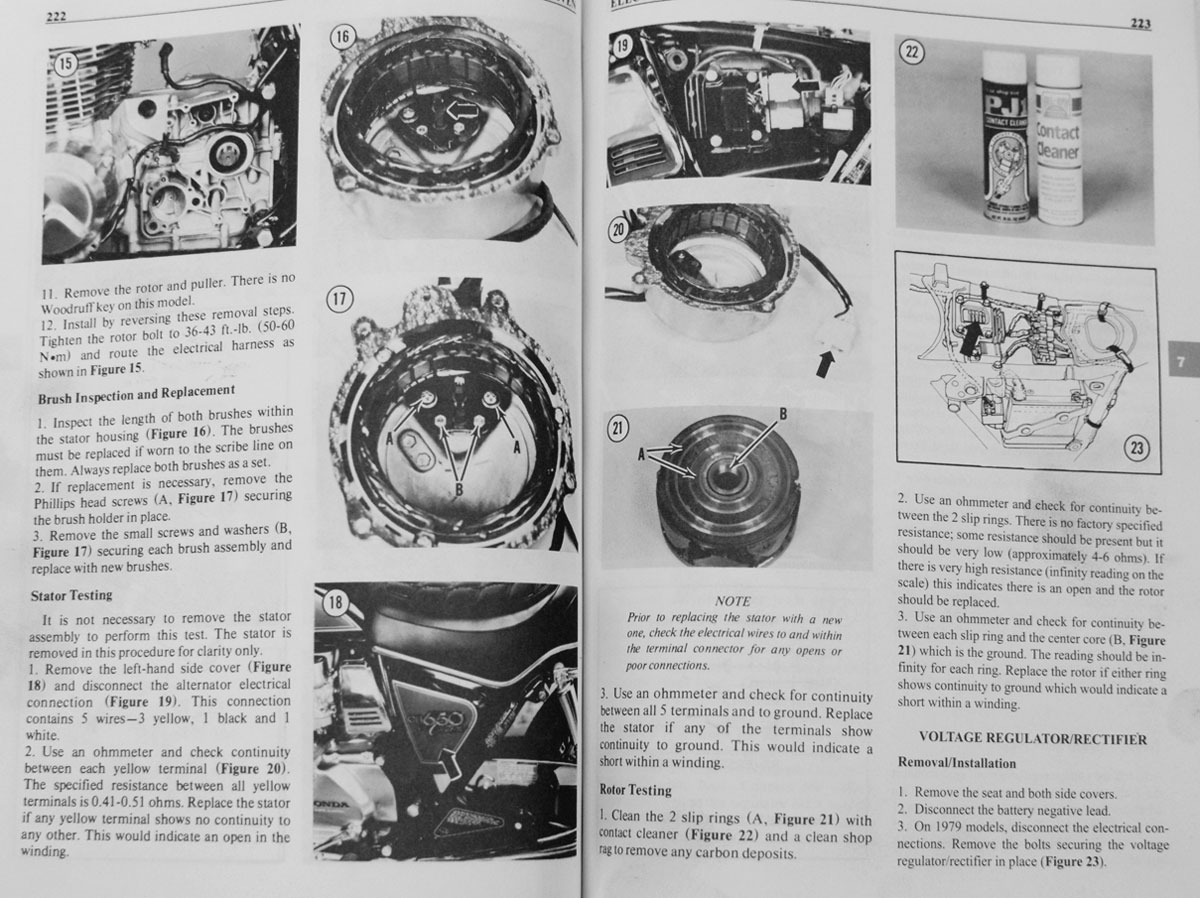 Getting the rotor off can be a pain in the ass. You need a “gear puller”. Pep boys has them. Make sure you back the lock nut out 1/4″ before trying to use the rotor puller. 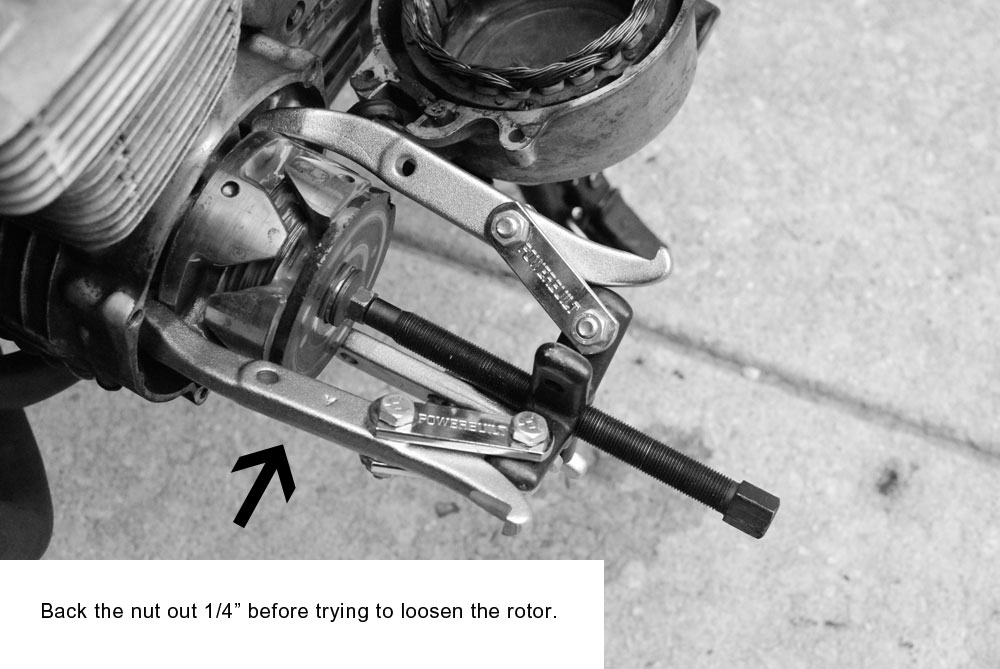 Once you replace the rotor, stator and regulator rectifier, shit should be good again. 13.5 at idle and around 14 at 4K rpm. 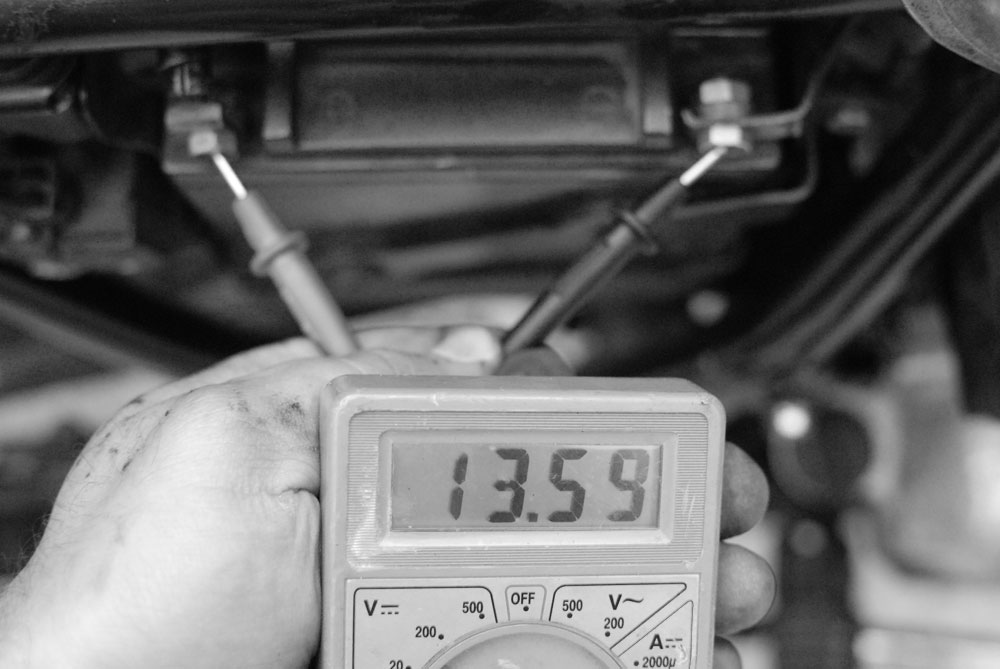 Ok, so… you know how to replace the 3 items in the charging system.

Let me go into detail about other contributing things about why this charging system sucks balls.

I’ve come to the conclusion that heat is one of the main thing that breaks down the rotor. The stock header sits directly next to the stator cover, so I swapped out to a Mac 4-1. This eliminates extra heat on that side. I also installed an oil cooler to keep the engine a tiny bit cooler. 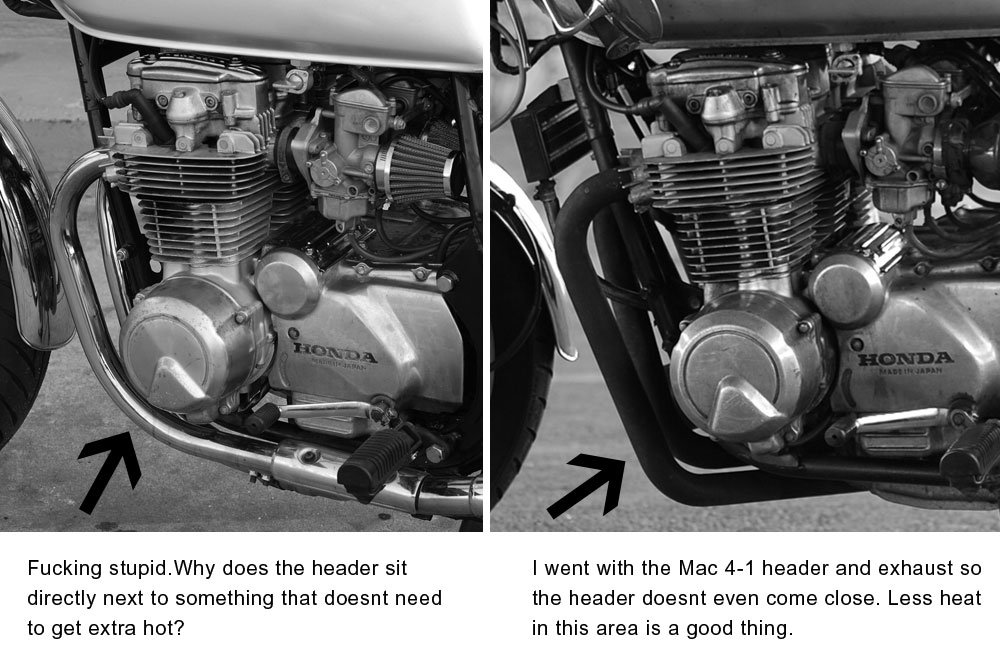 There are other factors that could make the rotor shit out. Not sure if i’m going to say this right, but if you have something in your wiring which is pulling extra amps, or the circuit isn’t flowing right, this could cause more strain on the charging system. So, basically, just make sure your wiring is the way it should be and your fuses are all good.

So, regarding my situation…
I’ve never had the charging system last longer than a year. I’ve done literally everything I can think of to prevent or offset the rotor shitting out:
– Every piece in charging system is brand new
– Different header/exhaust
– Oil cooler
– Rebuilt my entire wiring harness (check that out here)
– Double checked every connection numerous times

And the rotor still shits out on me. The aftermarket rotors have a thicker gauge wire to prevent it from shitting out, and over time… it still shits out.

I’ve researched this problem for the past 3 years, and there seems to be no real solution other than always keeping a backup aftermarket brand rotor and regulator rectifier on hand, so when your stuff shits out, you have a back-up ready.

One other thing to note is the stator rarely ever goes bad. Every time my rotor shits out,… it takes out the regulator rectifier with it, but the stator remains good. But… if you’re replacing all this stuff for the first time. Def make sure you replace all 3 just for a peace of mind.

Good luck. This is the only flaw of this cycle. Unfortunately, it’s a big flaw.

I’ve been running all the new charging components as outlined above… with a lower wattage headlight bulb from dime city cycles, and shit has been good for over a year now. No problems. Also… I have a custom switch to keep my headlight off during the day. So… try the lower wattage bulb, but keep it off when you can. It seems to help in conjunction with all the new charging components… and oil cooler, and streamlined wiring. 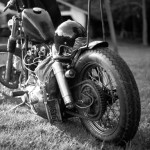