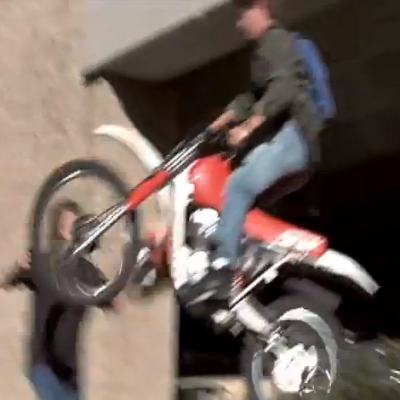 When I saw the scenes with John Connor on the dirt bike ripping around town… holy shit, I wanted a dirt bike so god damn bad.

I begged my parents to buy me a dirt bike.

My mom was a librarian. I would often go to her library that summer and look at all the dirt bike related books they had. This is before the age of internet, so looking at dirt bikes in books was about as good as you could get.

I still remember some of those books. Most of them were published in the early 80’s and had mostly 70’s dirt bikes in them. California enduro racing. Most of the books were cheezy instructional dirt bike books.

I thought it was the coolest thing I had ever seen, and continued to beg my parent to buy me a dirt bike. Since we lived in the average suburbs, I was denied a dirt bike.

Instead, my parent bought me a bmx bike, which was still pretty cool, and a good compromise. That’s how I started riding bmx. And I rode bmx for the better part of two decades. This was 12 years ago.

So… I guess Terminator 2 really shaped my life in a round-about type of way.

Looks like I’ll be living out my 11 year old fantasy soon enough once I get a 70’s enduro.

9 responses to “Why I started riding bmx”