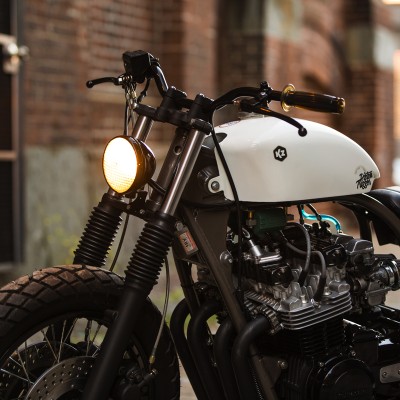 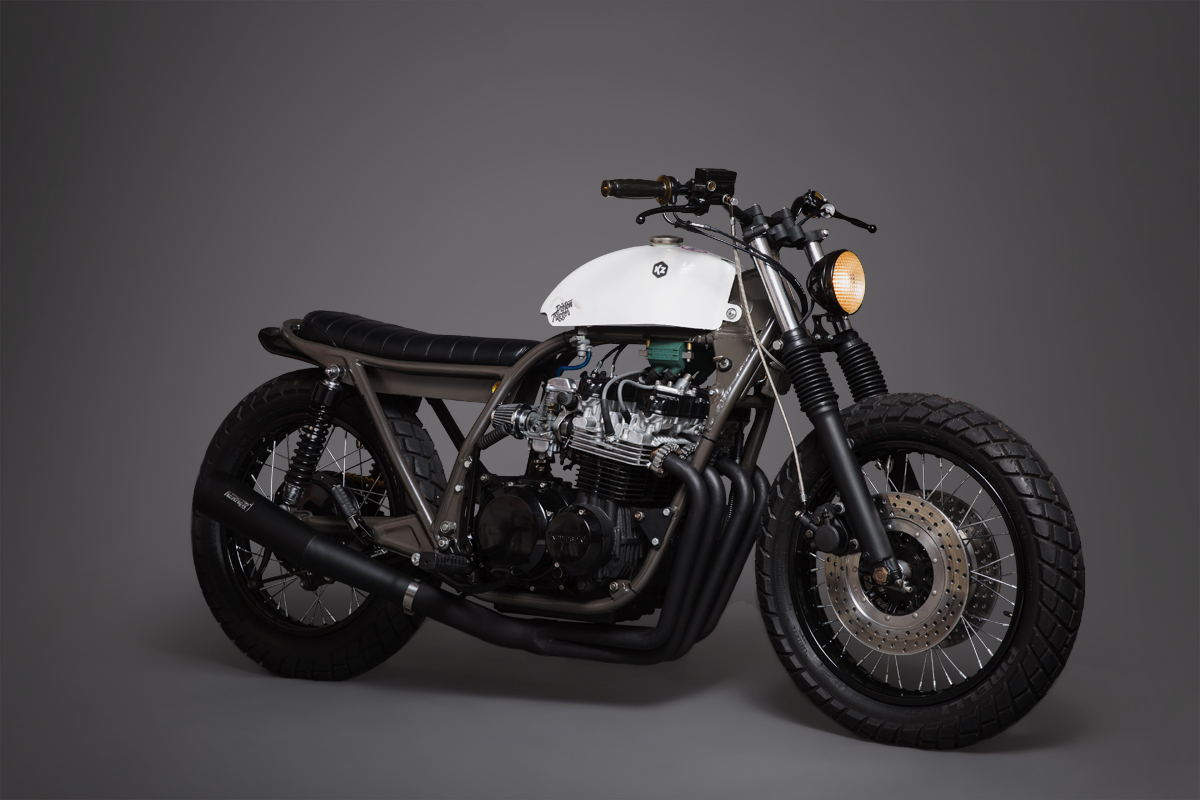 As this is my first post I would like to introduce myself. My name is Alex and you would find me riding around Philly on my blue KZ400 or the newly finished KZ650 and sometimes on a gray sportster. I am originally from Tallinn, Estonia. It’s a tiny pixel on the map located in the Baltic region of Northern Europe. Racing culture in Estonia is pretty big, but the custom bike scene from what I remember is modest. Once in a while a company like Renard Speed Shop will come out with something really unique. Check out Renard Grand Tourer on bikeexif. 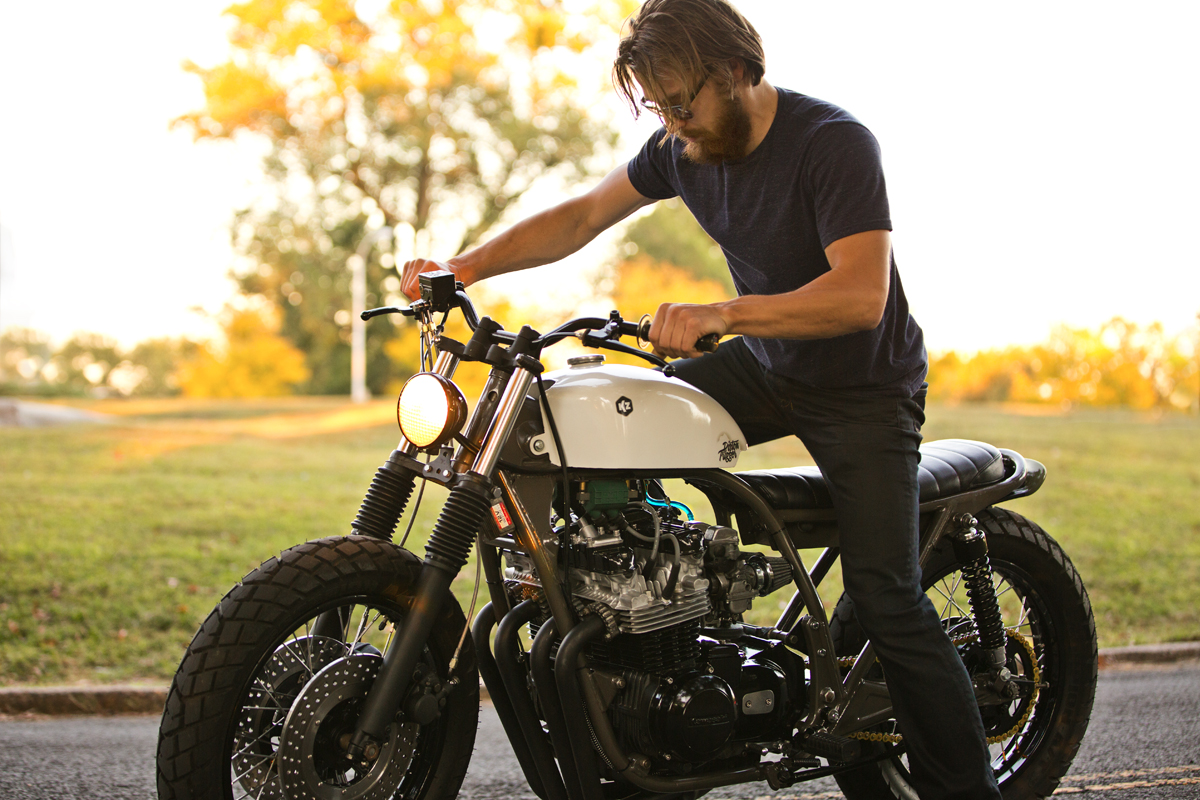 The bike is a 1979 KZ650 that I found on craigslist in a very rough form. It had a title, the engine turned over, the price was right and I was itching for a new project. It took a little over a year to complete. I have to say that this project didn’t come easy. It seems like I have spent the majority of time fixing my own damn mistakes. It took me so many tries just to get the smallest thing accomplished. However, the feeling of completing this project was amazing and all the headache was worth it.

I’ve always been a fan of 70’s era Japanese bikes and this is my second project. The first one was a blue KZ400. Unfortunately, I crashed that bike into a van last week and I am pretty sure it’s totaled. However, I feel pretty lucky to escape almost unharmed. I got that bike because I liked the way it looked. It had very nice lines, the tank was beautiful and it was easy to work on. Also, I think the simple tubular frame and proportions of the bike made for a good build platform. The second KZ was an impulse buy. It was cheap and had similar lines, but it was in a lot worse shape. Since I knew a little bit about the 2 cylinder, I thought I would learn about the 4 cylinder and keep the trend going. 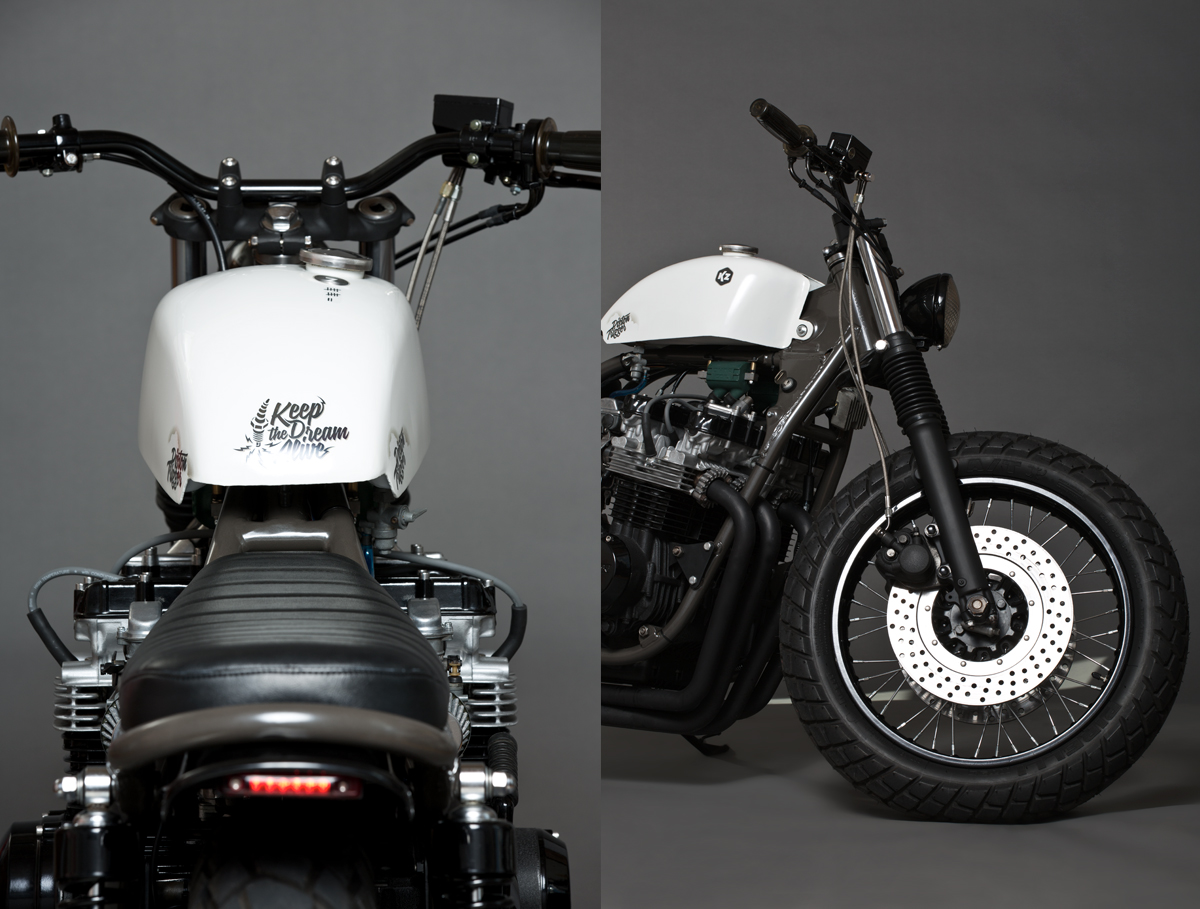 A few of the mods include:
-Welded a shorter rear frame loop
-18″ front wheel conversion
-Replaced all the bearings on the bike
-Dual front disk conversion
-Lowered front end and used shorter shocks in the rear
-Welded a small battery box to fit under the seat and it houses an 8cell ballistic battery
-Converted vintage tractor spot light into a headlight to use H4 bulb
-Rear taillight has been swapped for a small under the fender LED (superbrightleds.com has some nice options)
-Fitted a gas tank from an old Kawasaki Enduro and did a custom paint job on it (Used water slide paper)
-Fabricated a new seat pan and shaped the padding out of 3 layers of thick yoga mats and got it upholstered at Romeo’s Upholstery in the North East (Great guy and cheap prices)
-Rebuilt the engine and carbs (New gaskets, new rings, lapped valves)
-New electronic ignition and coils from Dynatek (Those guys are the best)
-Simplified all the wiring and relocated all the switches into the battery box
-Kerker 4-1 exhaust
-Manual cam chain adjuster (Highly recommend) 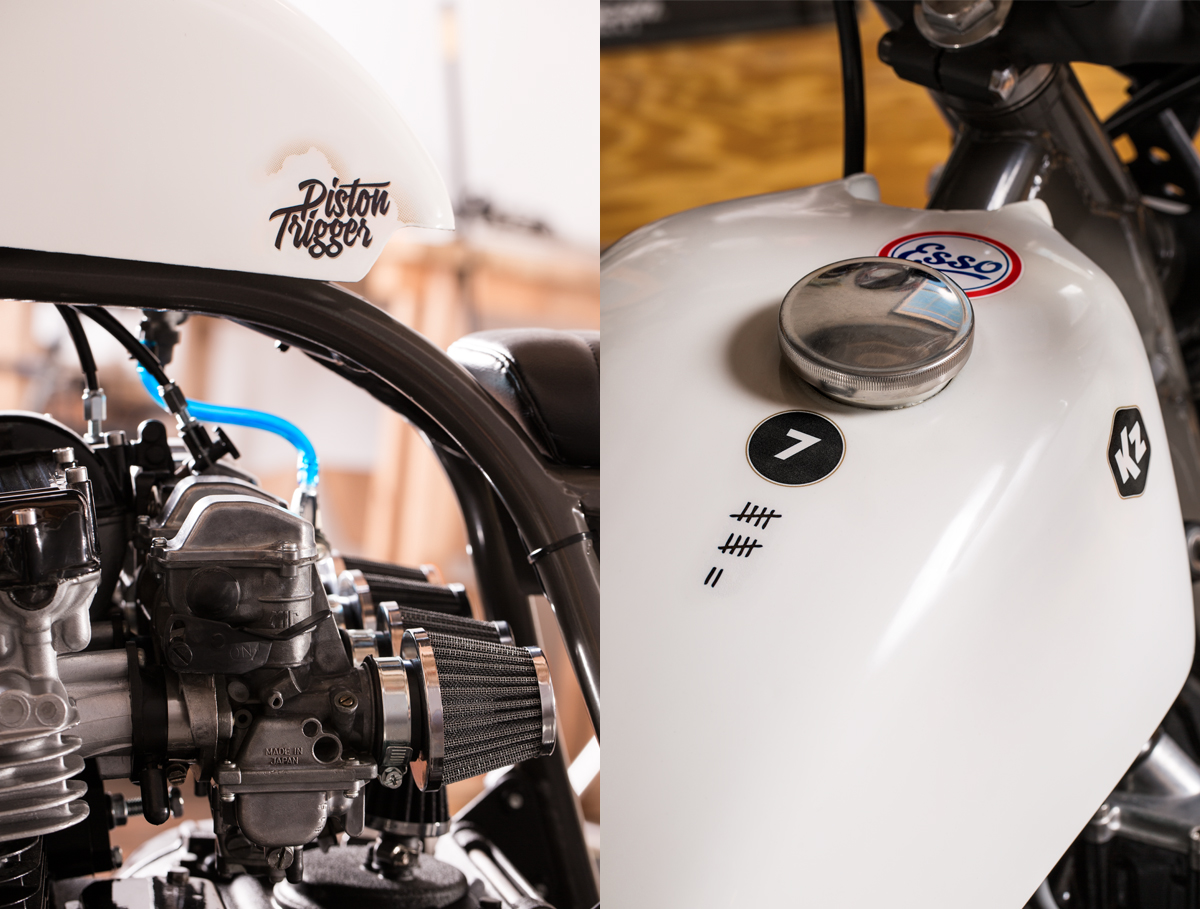 This build has a bit of a cursed story. I think the majority of it is my own fault. I have broken quite a few things while working on the bike, not on purpose. I had to reorder a bunch of parts. I think the engine is built out of 3 different ones. I have 2 extra sets of pistons, 2 heads, 4 calipers and rotors, set of carbs, set of forks, set of wheels and some other crap that doesn’t work or is damaged. I couldn’t figure out why nothing went smoothly. It could of been just the nature of this beast. One other issue was dealing with a powder coating guy who kept my parts for 3 months only completing 20% of the job. After a bunch of calls and a few concerned messages, he replied to tell me that he left all my stuff outside his garage. Thinking all of the stuff would be painted since I paid upfront, I arrived that night to a locked 12ft gate and most of the stuff on the other side sitting unpainted. At that point i just wanted to get everything back, so I managed to slide some small parts under the gate. The frame was too large to fit, so I climbed the gate with the frame on my shoulder and as I reached the very top a cop showed up. I climbed down and he had that grin like he just solved the biggest crime. Talk about bad timing. I tried to explain to him that this was my stuff and why I was here. His first response was -“bullshit, this is not your stuff.” At that point I thought I was getting arrested. The cop however was nice enough to hear my story and after about an hour of pleading my case and showing the text message and email history he let me go. However, he would not let me take the parts because I couldn’t technically prove that they were mine. I climbed the gate once more and left the parts there and went home. The next day I went back and did exactly the same thing with no cops in sight. Needless to say, I have never heard back from that powder coating guy again. 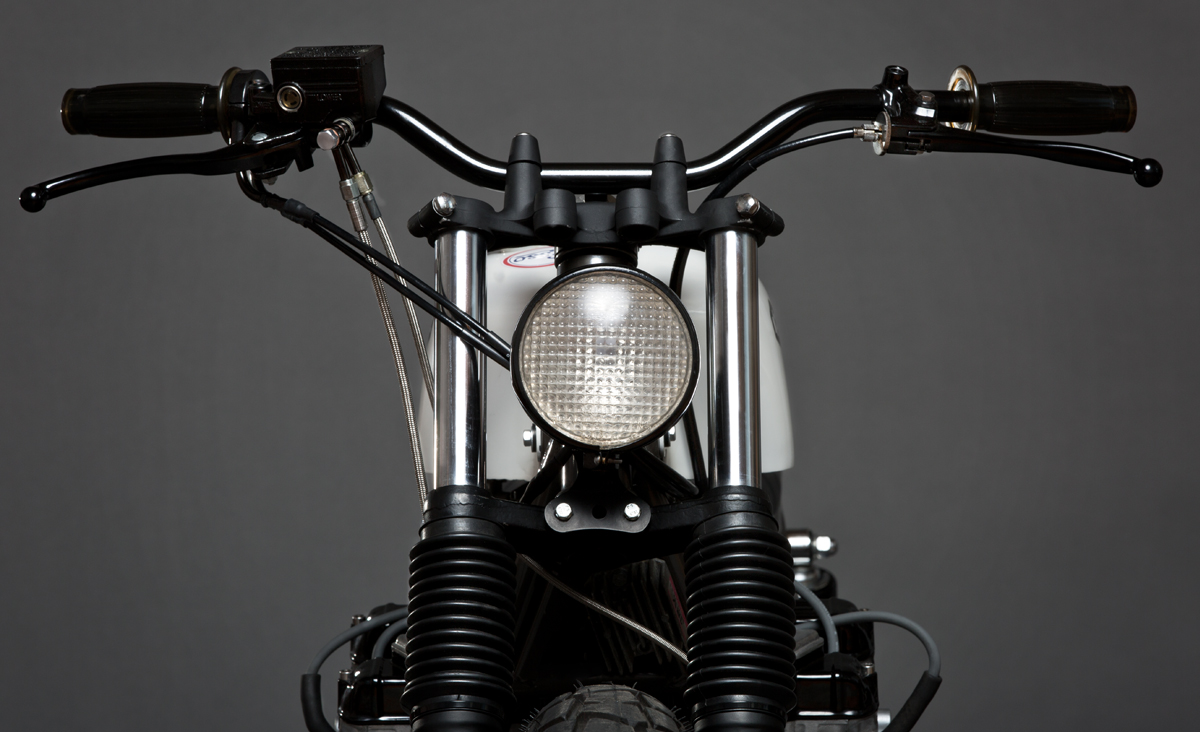 Not to long ago I started collecting videos of some of my favorite motorcycle builders. If you have some time to kill you can check them out on pistontrigger.com

All the awesome pictures have been taken by my friend Zack Gross zackgrossphoto.com 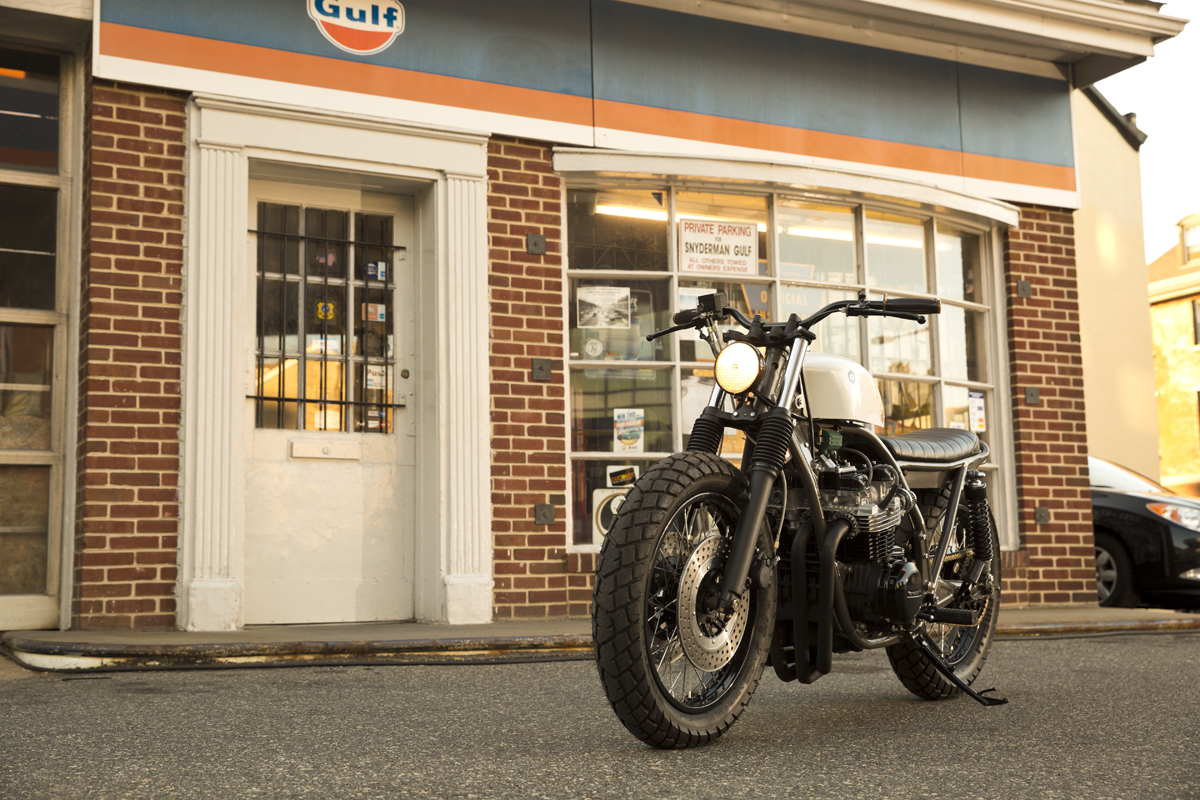 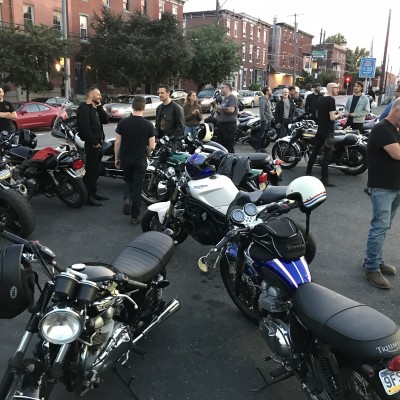