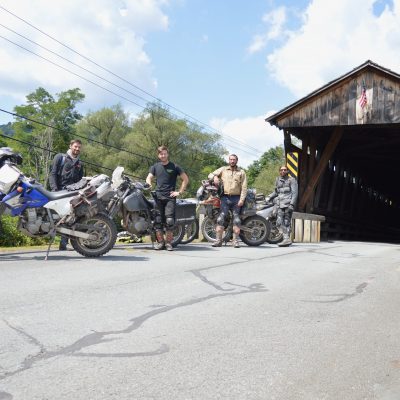 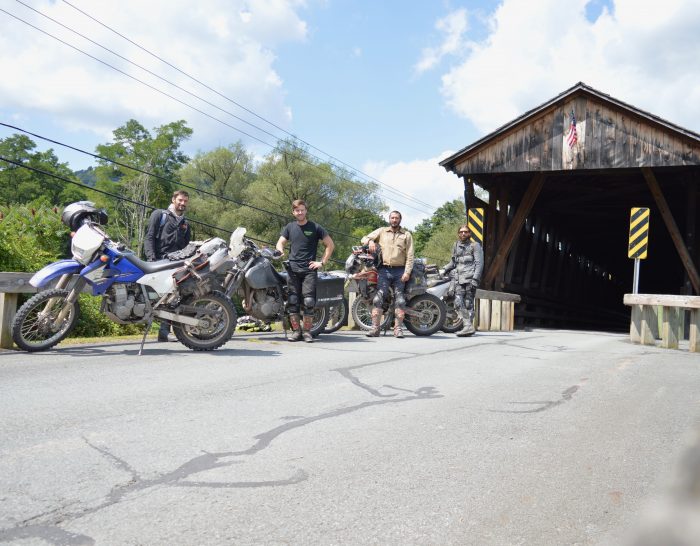 After hearing about Ed and Adam’s planned month in Montana, an extreme FOMO kicked in for me. A couple of days later,  I overheard Young Will say on a Thursday night pocket beer ride that he was doing the newly created North East BDR in August. Boom! FOMO problem solved. I ran joining the ride by Will and he was all for it.

MC trips are like their own sort of fun-virus. They are highly contagious amongst friends and can infect at lightning speeds. Not before long, Jake and Brian G had caught the NEBDR-20 as well.

The NEBDR is designed to be ridden south to north but Will wanted to do it the opposite way. He was 100% right. The plan was to slab it the first two days and start at the Rangely, Maine portion then head south. 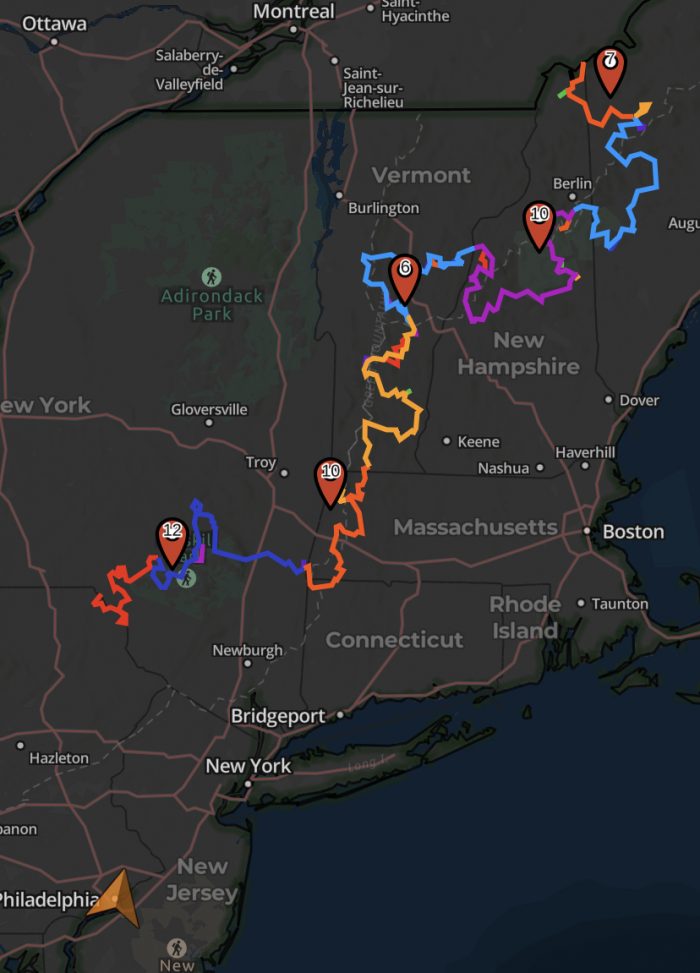 Will had to work this day so Brian, Jake, and I got off to an early start. Having the whole day gave us the opportunity to ride a better route than the all Interstate route that Will had to do later. We headed north in Jersey and got to great 2 lane roads once we got into New York state. We rolled up into the Hudson Valley and took a pit stop in Poughkeepsie. I found out the hard way that using a Ram Mount for your iPhone on a thumper will break the main camera.

It was decided that any pics I take this trip would have to be selfies. So fair warning.  We took the Taconic Parkway north into Western Massachusetts. The closer we got to Conway the better the roads and towns got. It was here that we hit our first quaint New England towns and covered bridges. Camp tonight was at Jenny’s house. Her and Waldo rolled out a spread for us and had a campfire going. What a great way to start any trip! We sat around the fire waiting for Will’s arrival. Finally, well after the sunset, we heard his 650 roaring up the road. We welcomed Will with leftovers and beer. The night was still kinda young but we all climbed into our tents to get prepared for the long ride tomorrow. 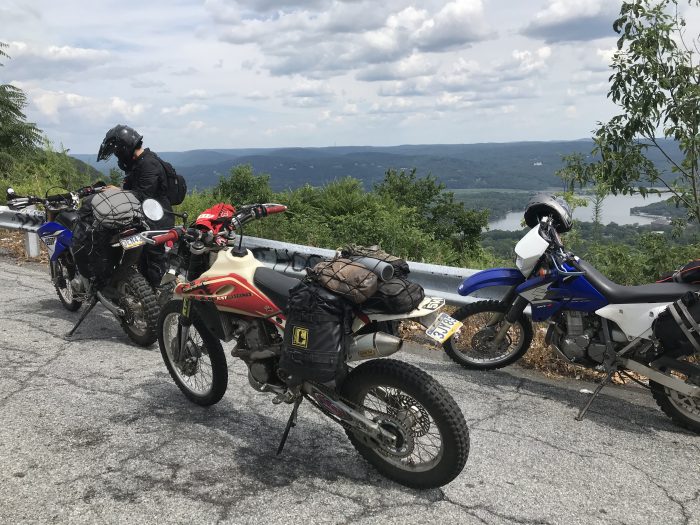 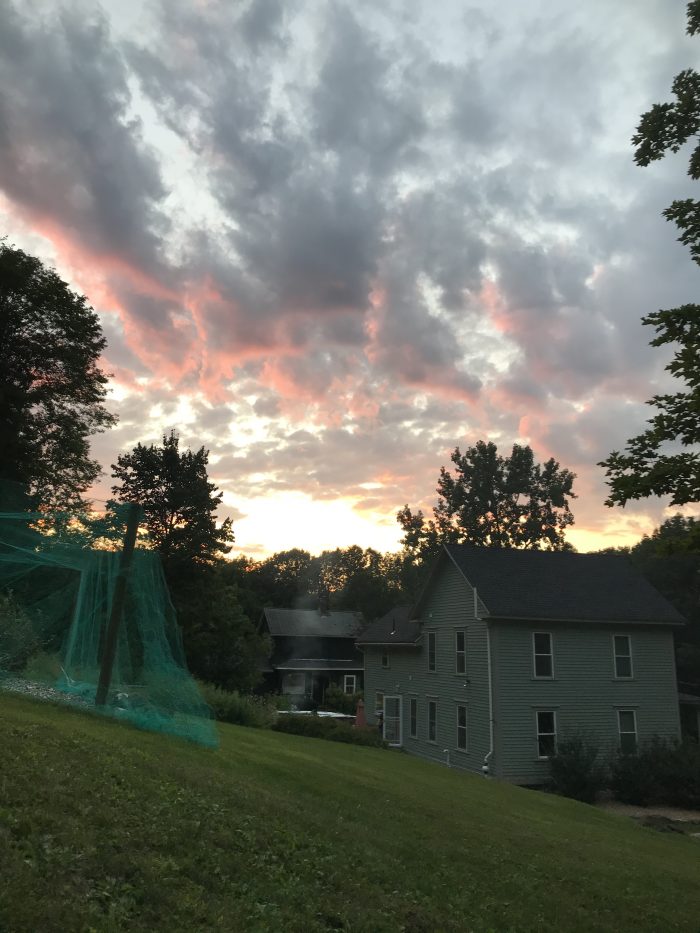 The four of us woke with the sunrise. Jenny had made us a killer quiche w/ a pesto spread and Waldo was slinging french press coffee. Not a bad way to start the day. We soon had everything packed and headed out some great winding roads but the fun would not last long. We knew today was going to be a lot of shitty interstate riding. We had to head out east on 2 then 495. This turned into 95 in New Hampshire and Maine. I’ve ridden my WR many times on 95  in Philly but only for short bursts to get around the city. The hours spent on this leg were me getting blown around and beat up. I didn’t realize it was still an 8 lane superhighway this far north but Maine is vacationland, after all, and this is the height of the summer season. We took a much-needed break from the highway and rolled into Ogunquit, Maine. I had found a walk-up spot to get lobster rolls (I was not coming to Maine and not leaving without grabbing one) but did not realize the tourist hellhole Ogunquit was.

The four of us on loud ass dual sports riding through all the families trying to enjoy their picturesque Maine seashore summer vacation was a site to see. We gave up and headed away from the staring eyes and crowded streets. Just outside of town we got what we came for at the Clam Shanty. It was worth it. We made the collective decision that we could not stomach anymore interstate highway. It was 50 more minutes via no-highways than it would have been with. We headed north away from the ocean and into the countryside. The ride got better and the mountains grew taller. We got into the Rangeley Lake area in the early evening. We stopped at an overlook for some killer views then rode on to the camp spot that Jake had found. It was a killer spot on a creek, nestled back off of the road. Unfortunately, being by the water and being this far out in the wild meant too many mosquitos. I came prepared with some 98% Deet spray and Brian had his bug mask. The other guys were up to their own devices. After sunset, we huddled by the fire and got lost in the stars. No moon and all the stars. Better than any show. 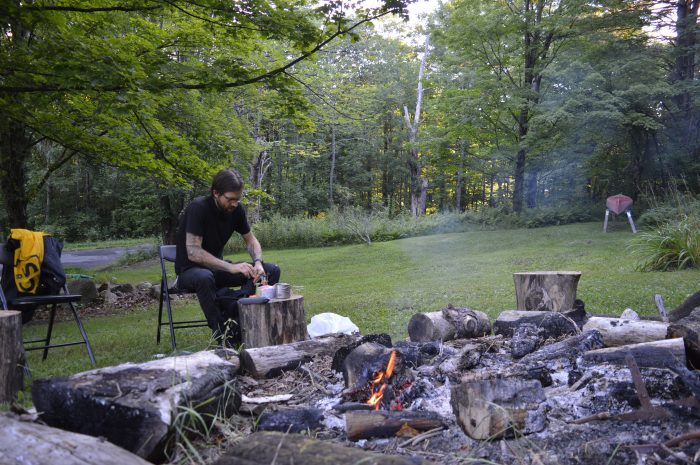 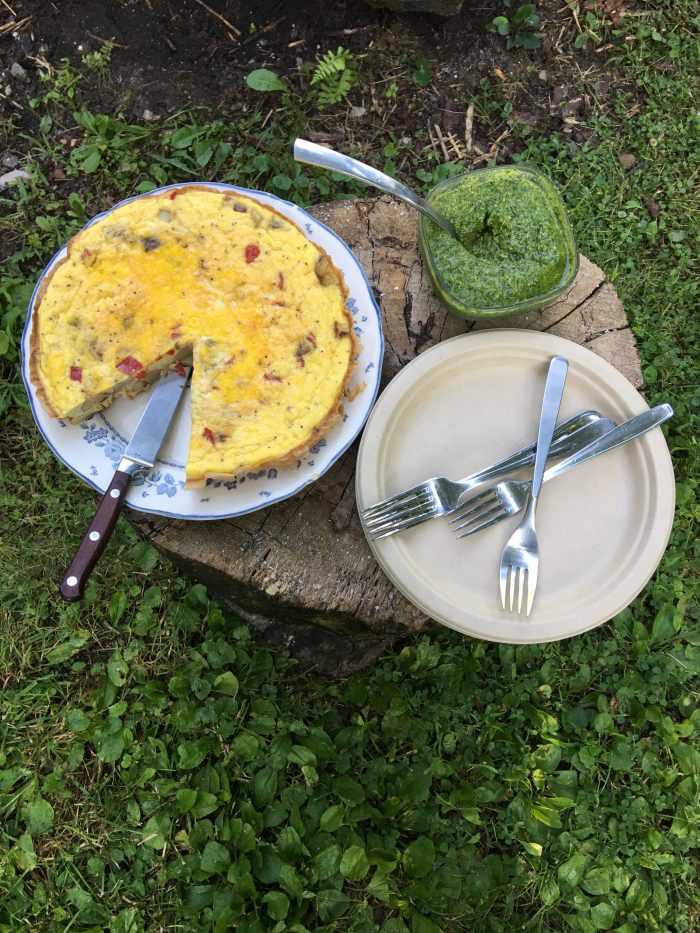 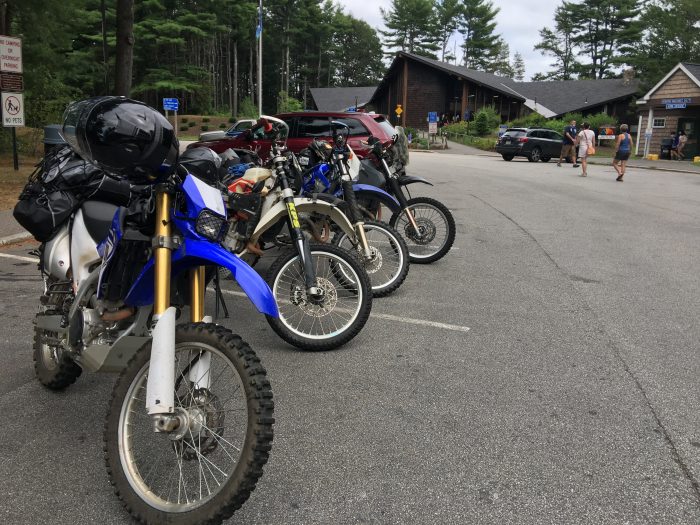 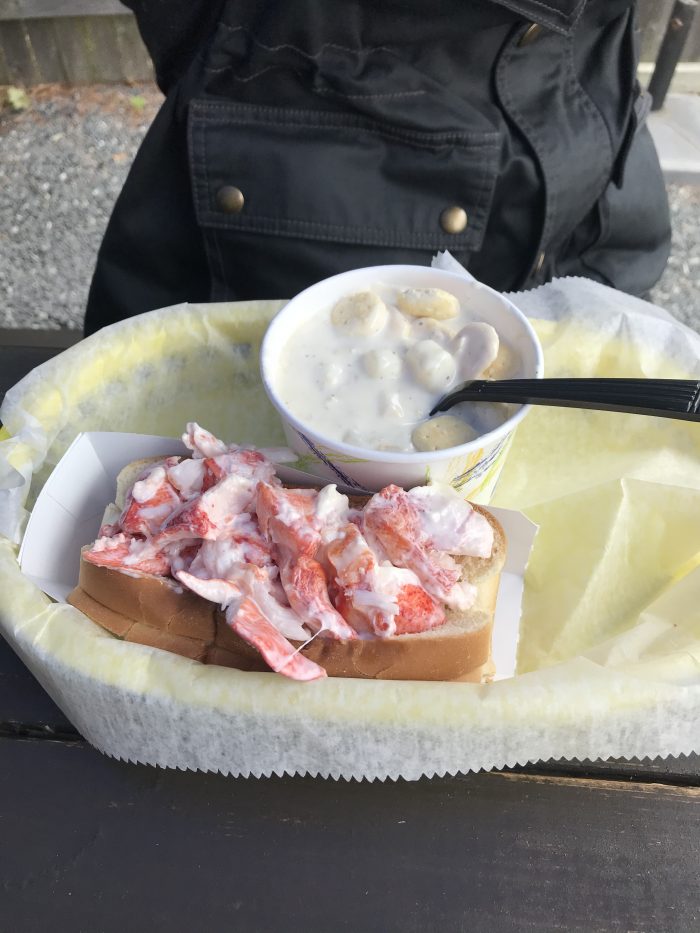 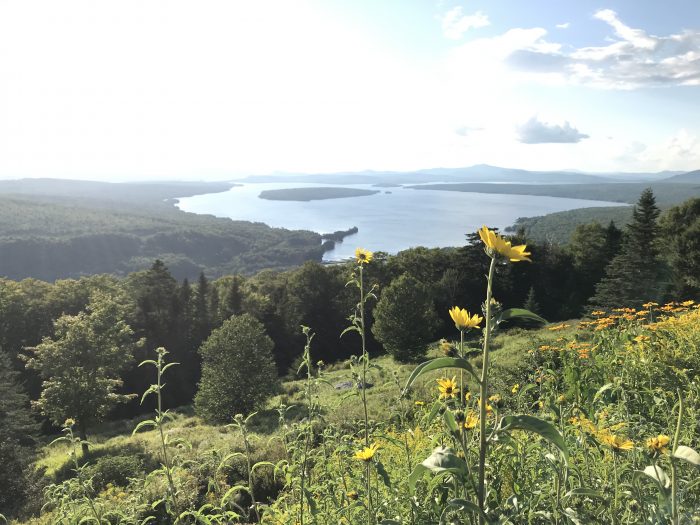 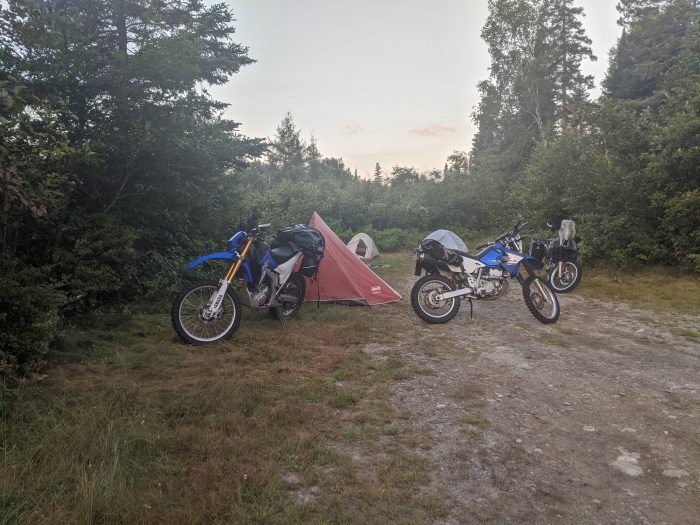 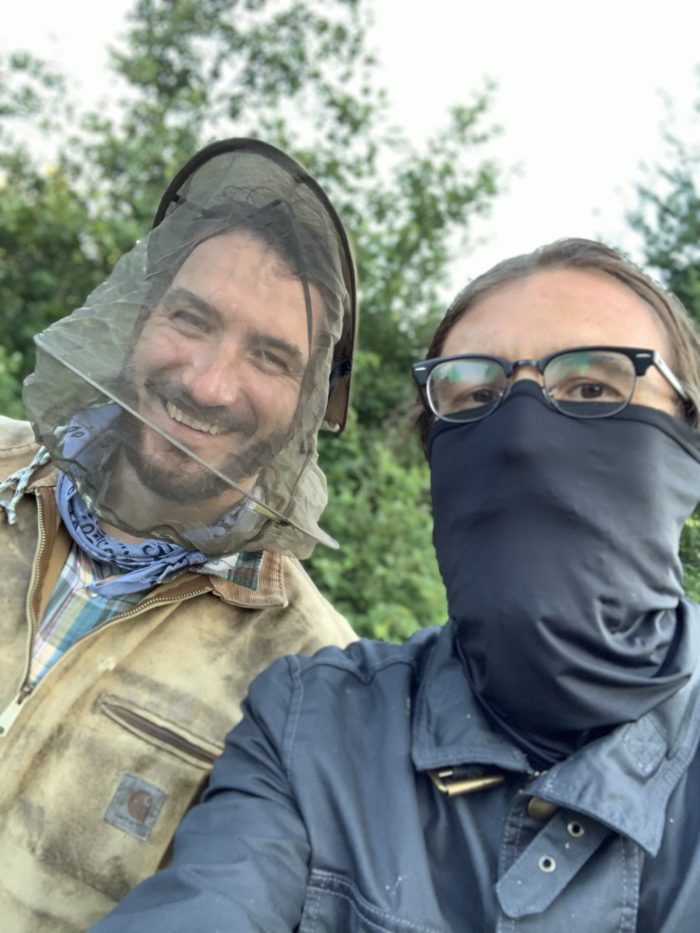 We expected some chill in the morning but not 40 degrees. Everything was dewy too. We sat our tents out in the sun to dry and packed up for the first official day on the NEBDR. We fueled up bodies and bikes in Rangeley proper. Breakfast was by the lake. It was cool to see the seaplanes on the lake. With everything in order, Will led us on. Instantly it was dirt roads. Wide-open, dusty tracks circled the lakes and into the Maine woods. We came upon a bridge that was out but it was easy to do the very small water crossing. The first part of the journey gave us a great mix of dirt and paved backroads. We stopped by Coos Canyon for pics and then tried to find some more falls that were off the track. We found no falls but did find a nice spot by a creek to take a break by. After we rolled on we rode fun roads around so many lakes. eventually, we got to the first technical section of the trip. It was some rocky ATV trails up through the mountains. We were in the woods for a while having a blast but soon came out to a small country store in Waterford called Melbys. They claim to be the “Home of the Buffalo Burger”. We were hungry so it was da round 4 buffalo burgers. While we were eating a dude on an XR650 rolled by and threw us a shaka. He did swing back and talk to us. His name was Dave.  He just got his XR and was wanting to do the BDR. We talked for some time but soon had to be on our way or at least we thought. Will had a flat rear. We first tried patching it but that was a huge fail. Then we threw a 21” tube in his 17” tire. Will didn’t bring a tube so he had to use what we had. The entire time we worked on the tire, Dave hung out with us.

We let Will do his own work and got to know Dave. He was a rad dude who has done some cool shit and been all over the country. By the time Will had his tire holding with the 21” tube, it was getting late. Dave offered to let us camp in his yard. We decided that Dave’s yard would be the perfect camp spot. He then led us on a super-fast, sick ride through some dirt roads that were all around the area. He took us to the Kezar Falls Gorge. If it were only earlier and warmer, we could have taken a dip. Finally, we roasted all over till we got to Dave’s house. We met his lovely wife, Vicky, and enjoyed some beers by the fire with Dave. He had some great stories and we shared some of ours. Soon we were all beat and got to fall asleep to the lullabies of owls hooting and coyotes howling. 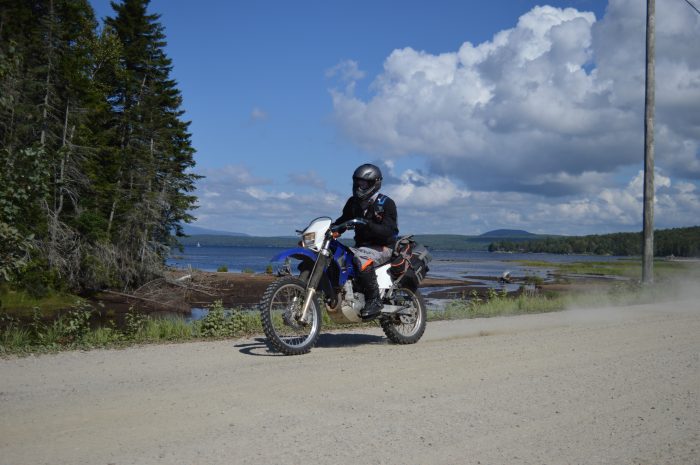 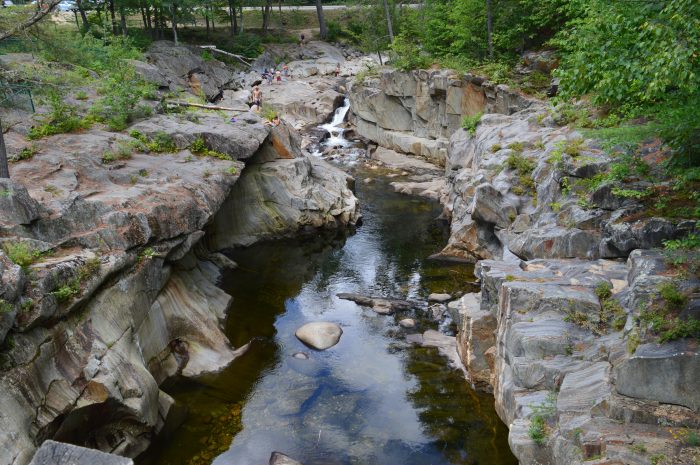 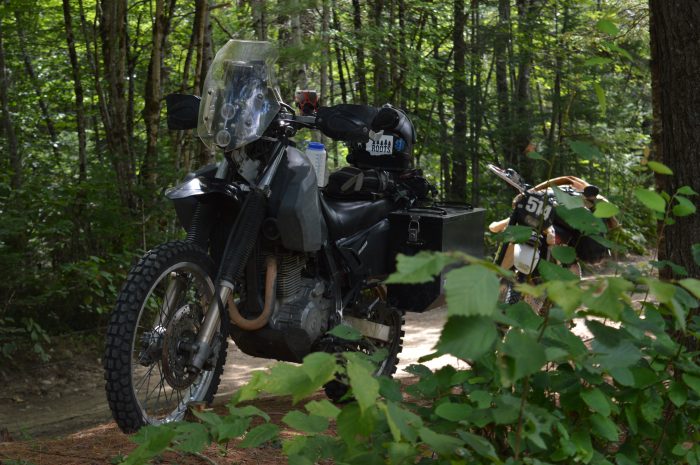 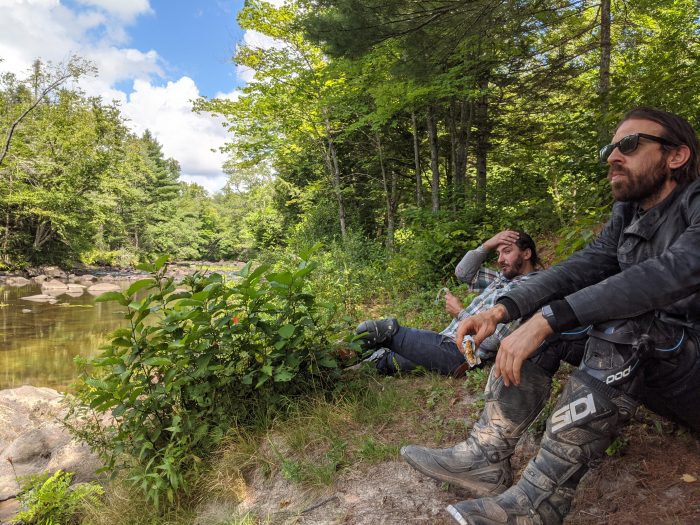 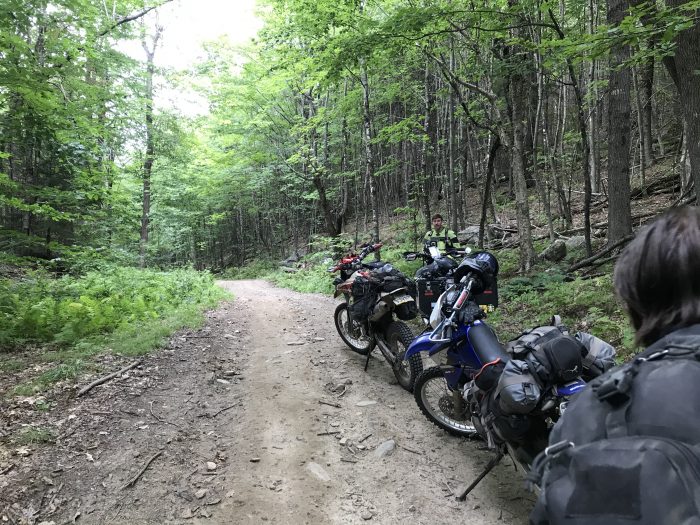 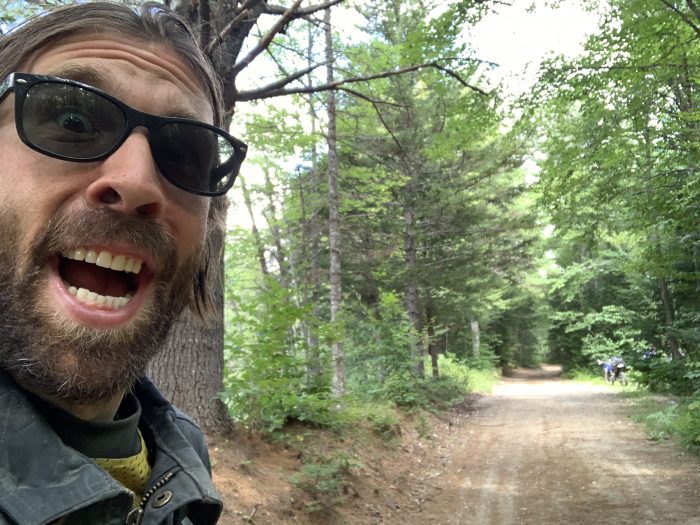 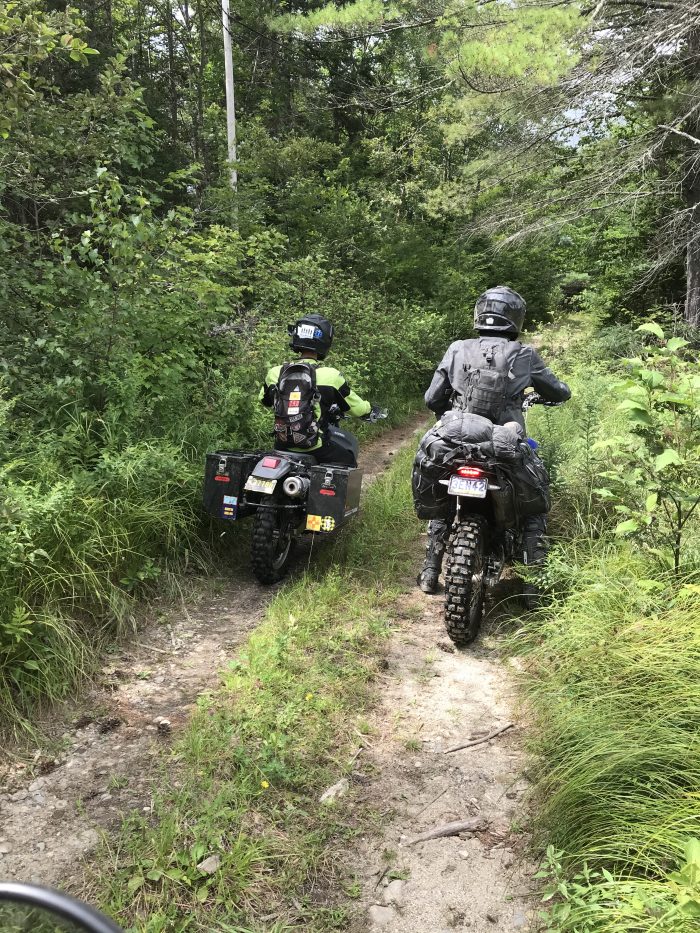 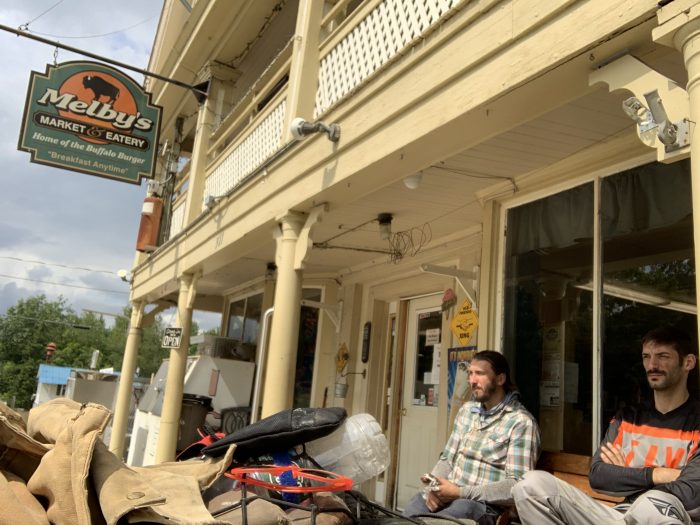 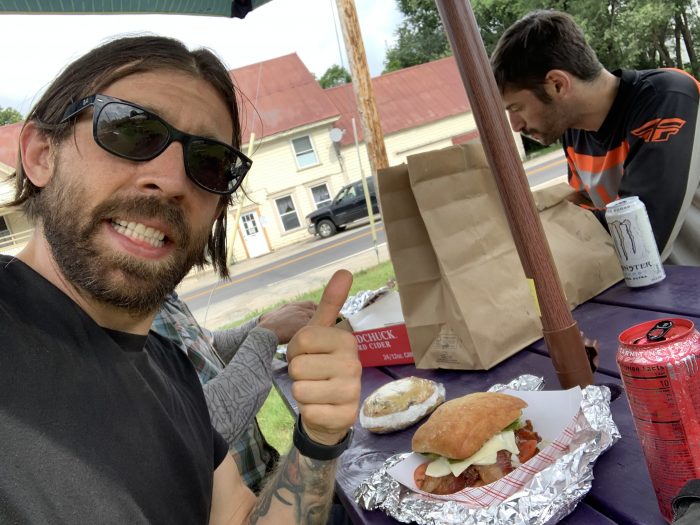 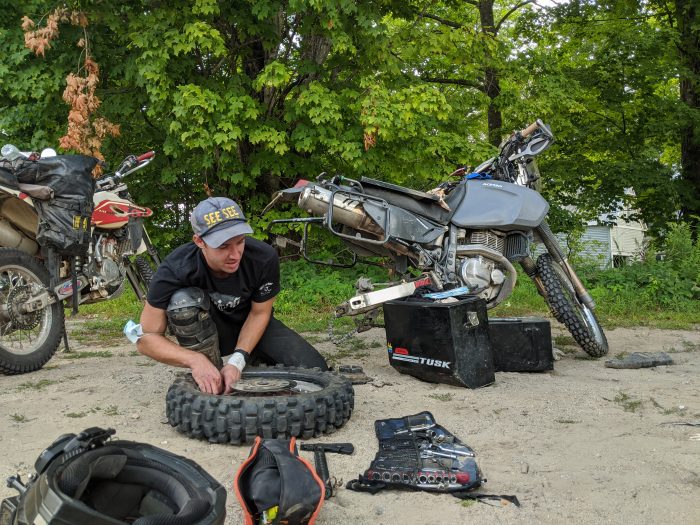 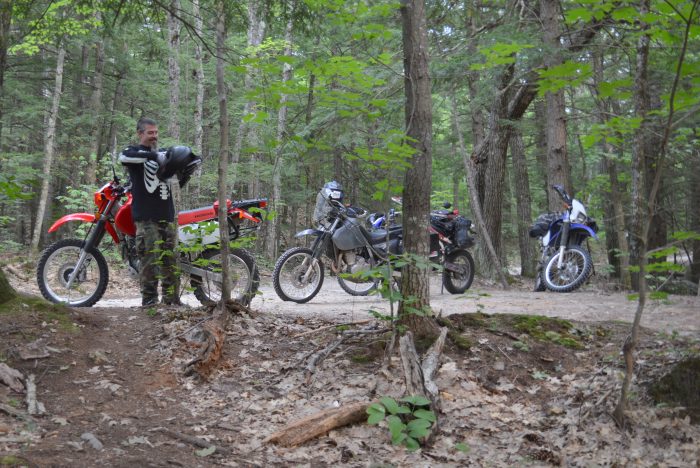 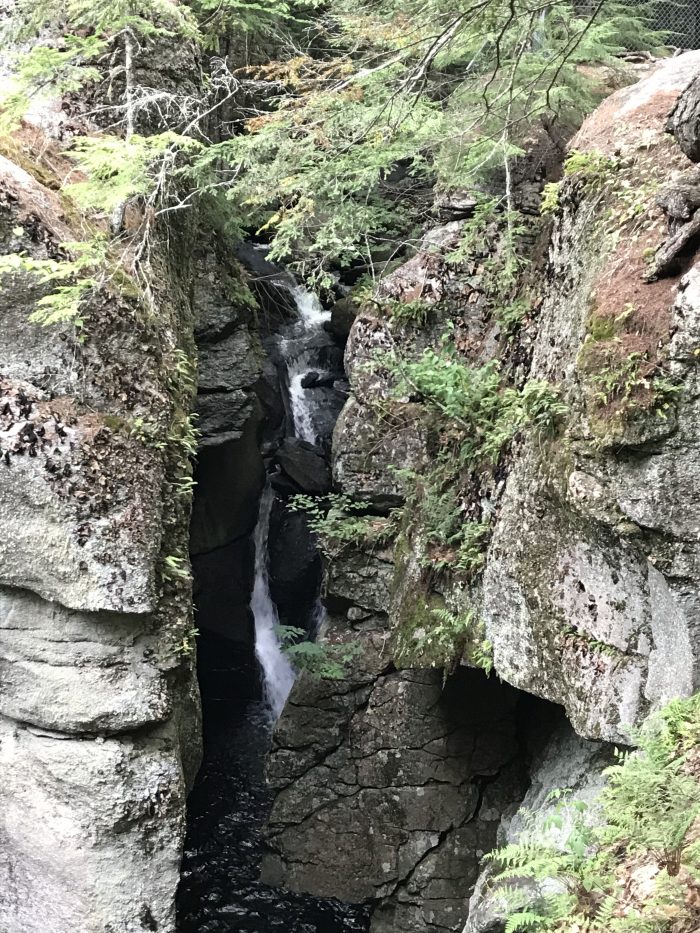 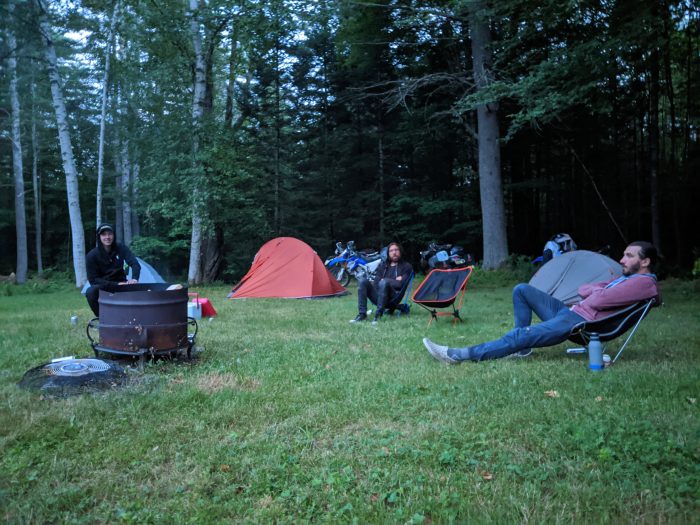 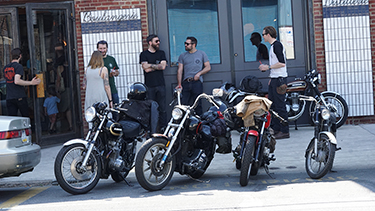 Nothing beats a camping trip on motorcycles. A few of us kicked off the summer camping season with a trip down to Taylor’s Island Maryland for Memorial Day weekend. We met up Saturday morning, grabbed some coffee and hit the road. Ed mapped out an awesome route and the majority of the ride there was nice country […]