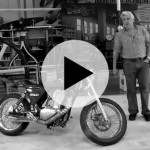 The first time I watched this video, it was really easy for me to say “Ah, that’s lame. Fuck that”.

But after watching it a second time, I think I like their idea. And I think I actually like the way the bike looks. I wouldn’t get one, but I can see how someone would be really into it.

They take the Suzuki Savage 650 and make a cafe kit, tracker kit, or bobber kit. For just under $3 grand.

Again, I don’t think I like Suzuki’s but I gotta say… A good idea is a good idea, and taking 1 particular bike that can easily be “kitted” to a cafe / tracker / bobber is a pretty cool business model. No idea if they actually make money, but it’s cool somebody is trying it out. I give them props for trying. 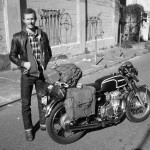 – late start saturday morning – left Philly at about 10:30am – tach stopped working 20 miles from the house. Fuckin dumb! – I set up camp after 300 miles outside shenandoah, george washington state forest – now on my way to Gallipolis, OH to see aaron and erin. hopefully they’ll answer my phone call