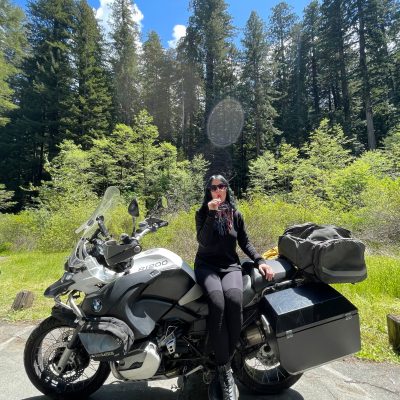 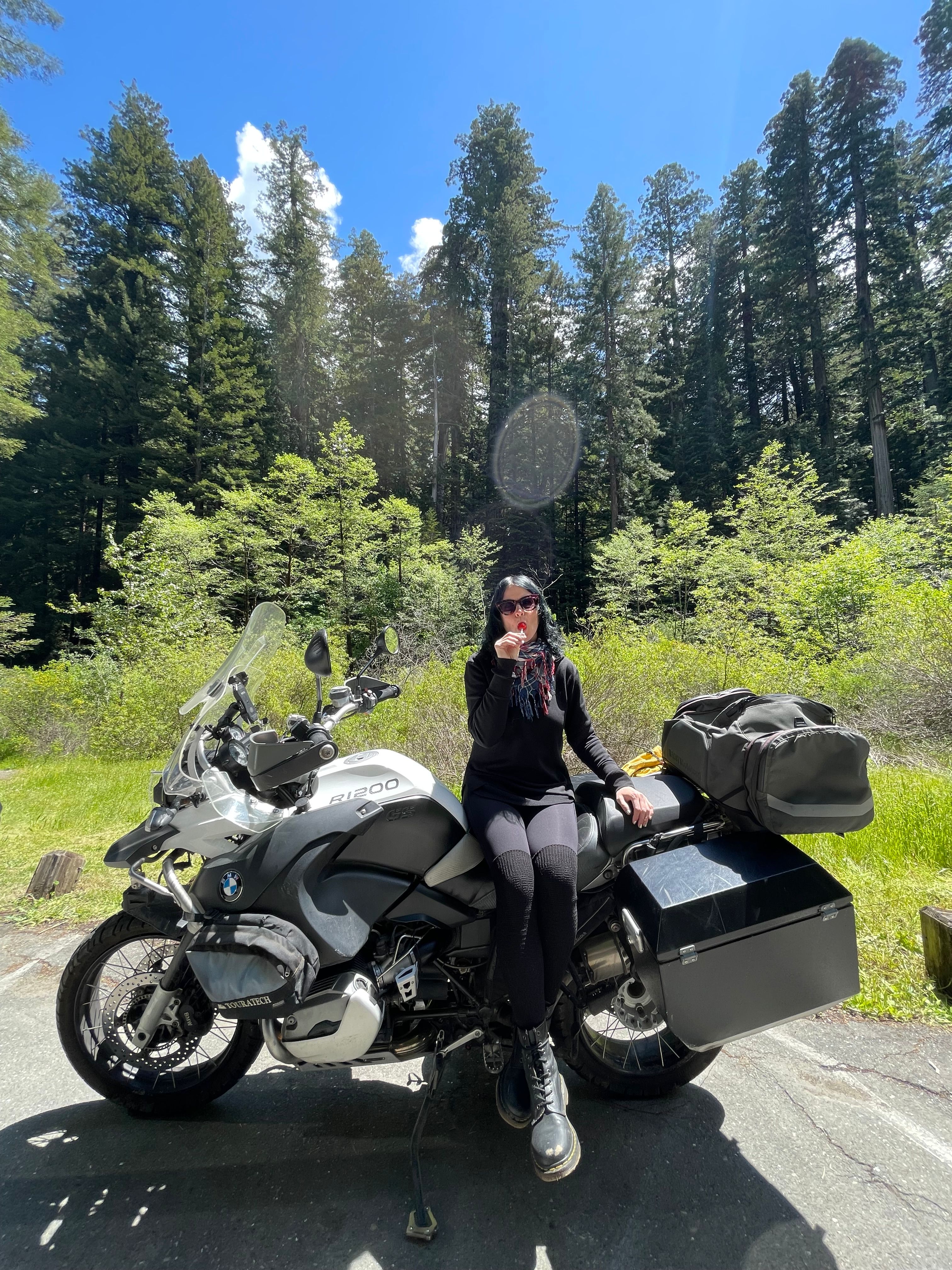 This trip came about after trying to escape the winter and stumbling on Riders Share. When I found out I could rent a 2011 BMW GSA1200 for about $100.00 a day the die was cast.  I was going somewhere, I was gonna see something, and Kira was coming with me.  I put on my best charm face and pitched the idea to Kira with surprisingly little resistance from her end.  I told her I would take care of everything and it wouldn’t be that bad.  I don’t know if that trick will ever work again… but hey.  After a bumpy plane ride and an even bumpier Lyft ride, we picked up the bike. 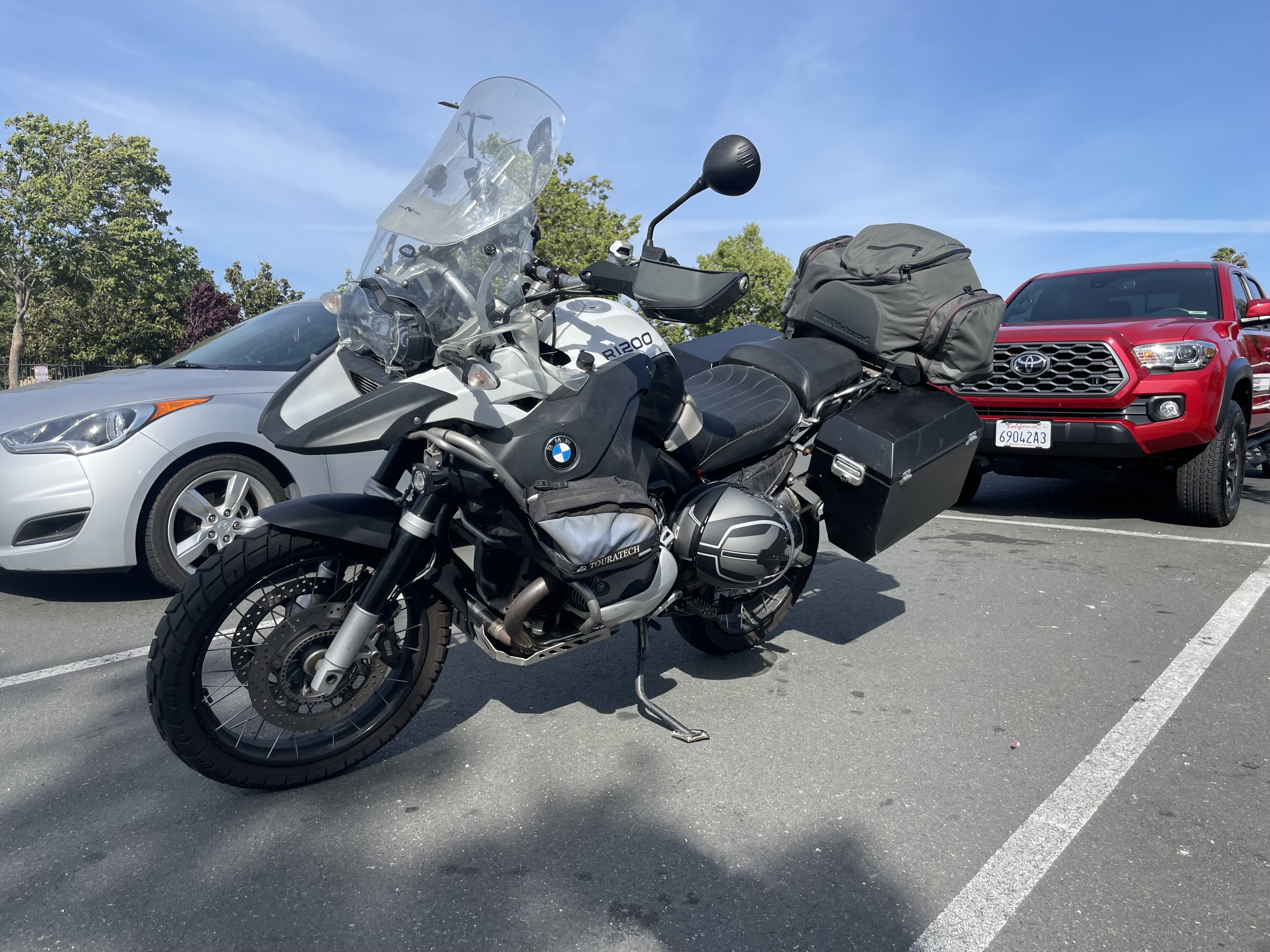 Trip -Neither of us drank wine but we did go to Lagunitas!  The original plan was to only spend one day here to carry us over from the plane to the northern ride but with rain in the forecast we decided to spend an extra day.  The riding here was great.  rolling mountains with little tree cover, nice flowing roads with perfect asphalt, a great road that turned to dirt on our way to a hike.  Only downside was about 25mph winds that were blowing us all over the road.  So we ate, did a hike, drank, and generally took it easy.

Bike – First thing is first, a fully loaded GS is HEAVY.  After a base weight of 590lbs, the hard bags, crash protection, 9 gallon fuel tank, soft bags, all of our gear, and Kira.  I was estimating about 850lbs of bike riding down the road.  Now I’m not lying when I say this, over 5mph the GS rides itself.  It just wants to stay upright.  With the hard cases and soft top bag the GS took my full 55l seal line bag, a full backpack, a small backpack, a full gym bag with shoes, groceries, drinks, snacks, and anything else we could think to throw at it.  It all fit.  Now that the bike was all loaded up we jumped on the highway and immediately did 90mph and didn’t realize it.  That’s how smooth a GS is. 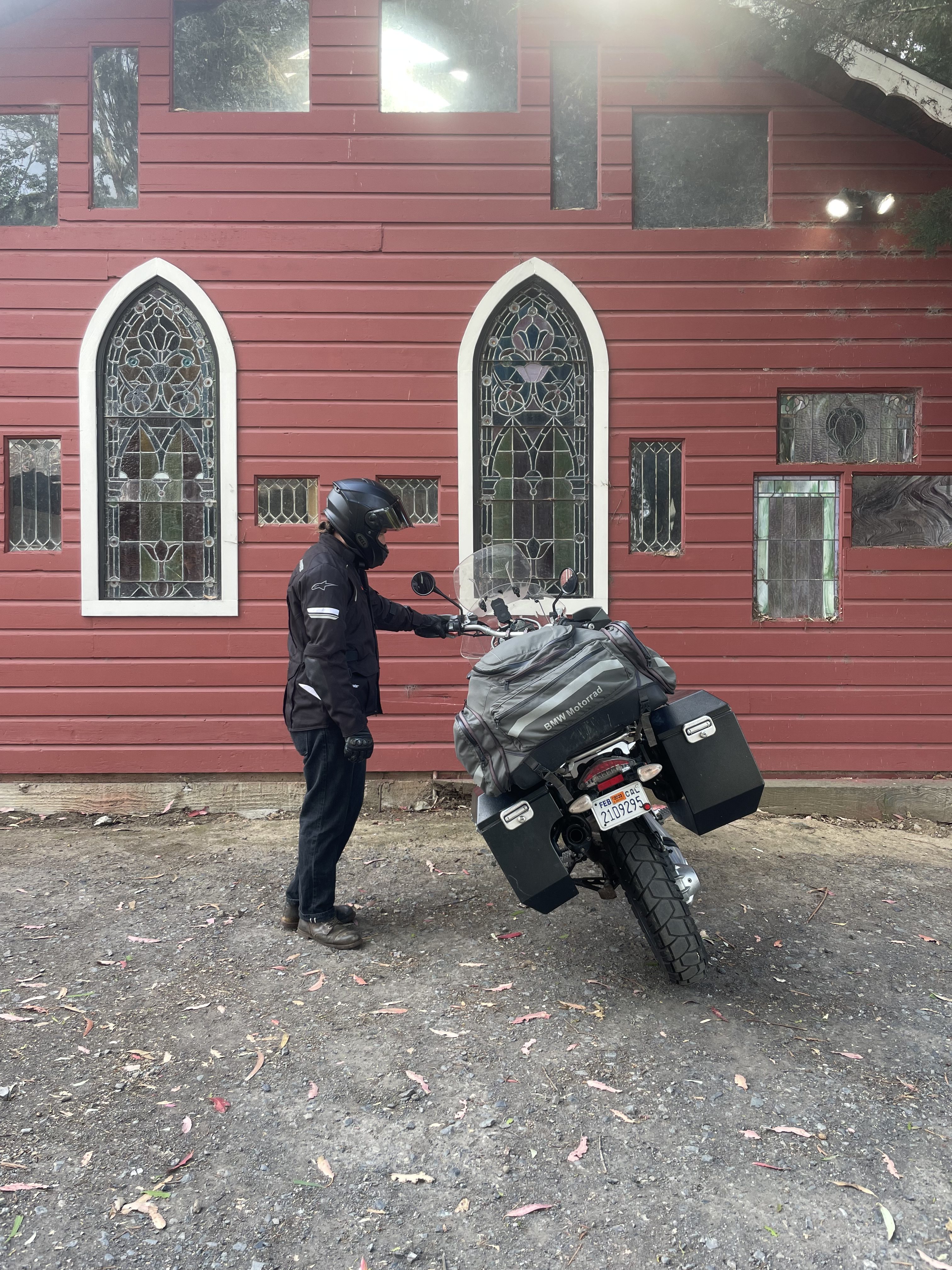 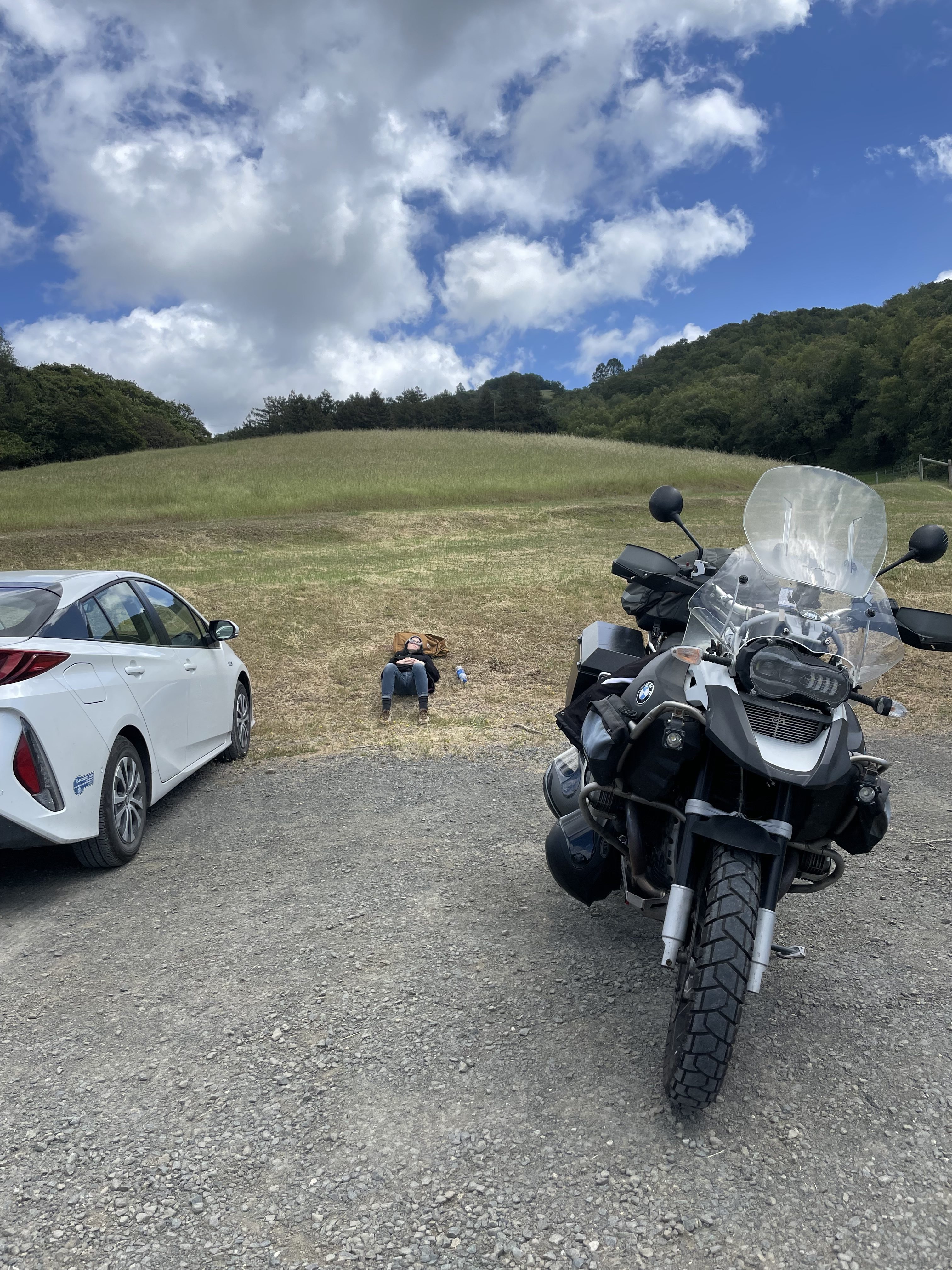 Trip – I was not ready for this, easily one of the best days of my life.  After we left Sonoma we cut through some mountains and popped out onto Rt.1 as soon as it turns adjacent with the ocean.  You crest a few hills then BAM, sheer cliffs with ocean everywhere.  It just never stops.  For the next two hours we just sucked it all in.  Every time you think it will stop you crest a hill and it just smacks you in the face again.  Just about every turn on Rt.1 is a 20 mph suggested turn that is banked in your favor with no imperfections in the road.  Some are suggested 10mph with the same attributes.  It was like a two hour long race track. Then when it finally does end you turn into perfect roads with redwoods blocking out the sun everywhere and the racetrack starts again.   It was just breathtaking.  I will do this again.

Bike – Now this was why it was one of the best days of my life.  A fully loaded GS with 70/30 sheinko tires (the rear was just about done too) and a passenger has no problem scraping footpegs at every turn.  It felt like my R1, just telling me you can get more, go faster, lean further, etc.  It was one of the most confidence inspiring bikes I’ve ever ridden.  The weight just disappeared once you put the bike on its side and if you did get close, the bike softly reminded you to dial it back a little.  Power was always there and you could lug up hills in 4th gear at 2k rpm if you felt the need.  So when I wanted to push it and get some excitement in, gotcha. When I wanted to ride 20mph below the speed limit and just soak everything in, Gotcha.  you feel no wind behind all those fairings and the GS is just the companion that gives whatever you ask of it. 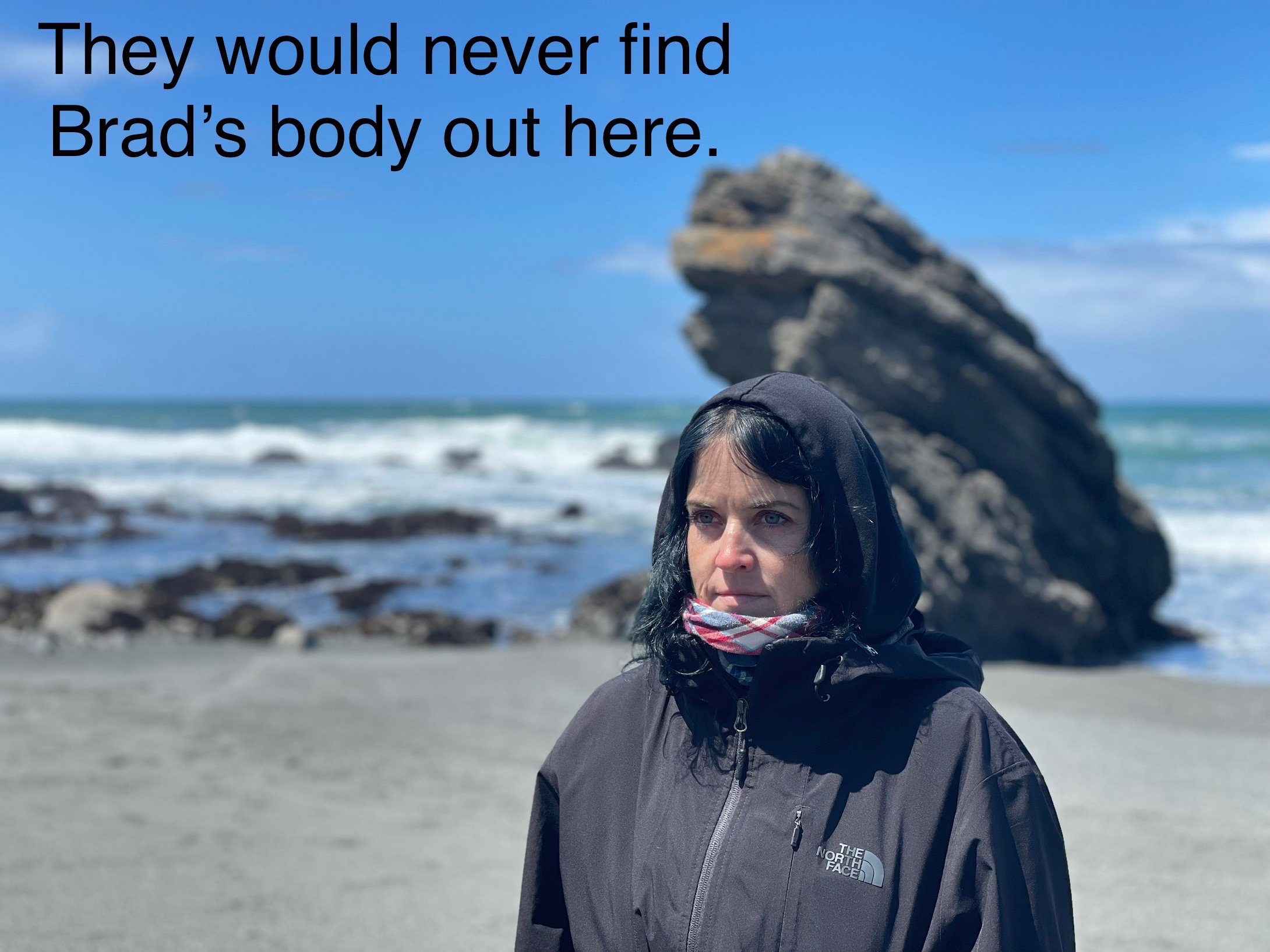 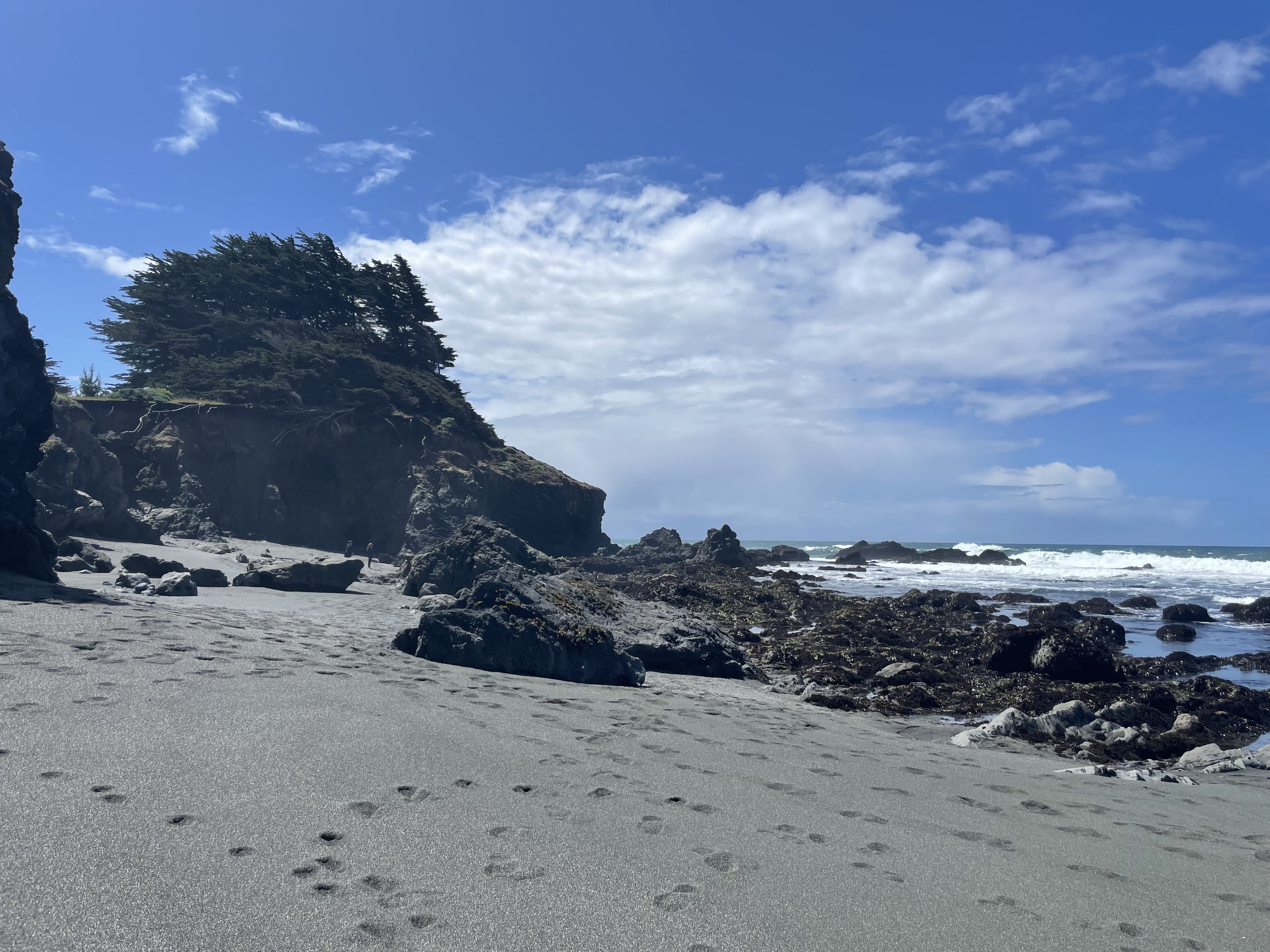 Trip – So we rode to basically the start of the Avenue of the Giants which is a side route that cuts through Humbolt state park.  This was just unbelievable.  It was basically riding through Jurassic Park.  Nothing is small, the redwoods block out the sun and there are the biggest ferns that you’ll ever see in the undergrowth.  It just goes on for miles and miles.  Then you pop out at 1 stoplight towns that have a few things then right back in.  When you’ve had enough of that you can go hang out by the rivers and streams that run through with immaculate water.  We went on the big tree hike and it just drove home again how small we were.  Nothing will beat that for sure.

Bike – I was really starting to appreciate this bike.  After unloading I was going to take the hard cases off but then thought what’s the point.  If the bike can turn as hard with the bags, and I never noticed the weight why would I take them off?  It can do everything fully loaded so why not just have the space to grab stuff along the way.  I really think that says a lot about the bike, when you don’t want to take the luggage off.  After riding about and doing some hikes I noticed a Tacoma parked on a beach and I went “yup” inside my helmet.  We went looking for the route and found it.  The entrance was an axel deep puddle about 20′ long and the gs didn’t skip a beat.  We went right through it, turned on the dirt road, turned on the beach and the bike ate it all up.  I will say the front end has a very “disconnected” feel so you have to ride the back of the bike.  I wouldn’t take this thing through reading woods,  but anything less than that… yup.  On the way out I made sure to blast through the same puddle to make sure I got Kira a little wet….. it worked. 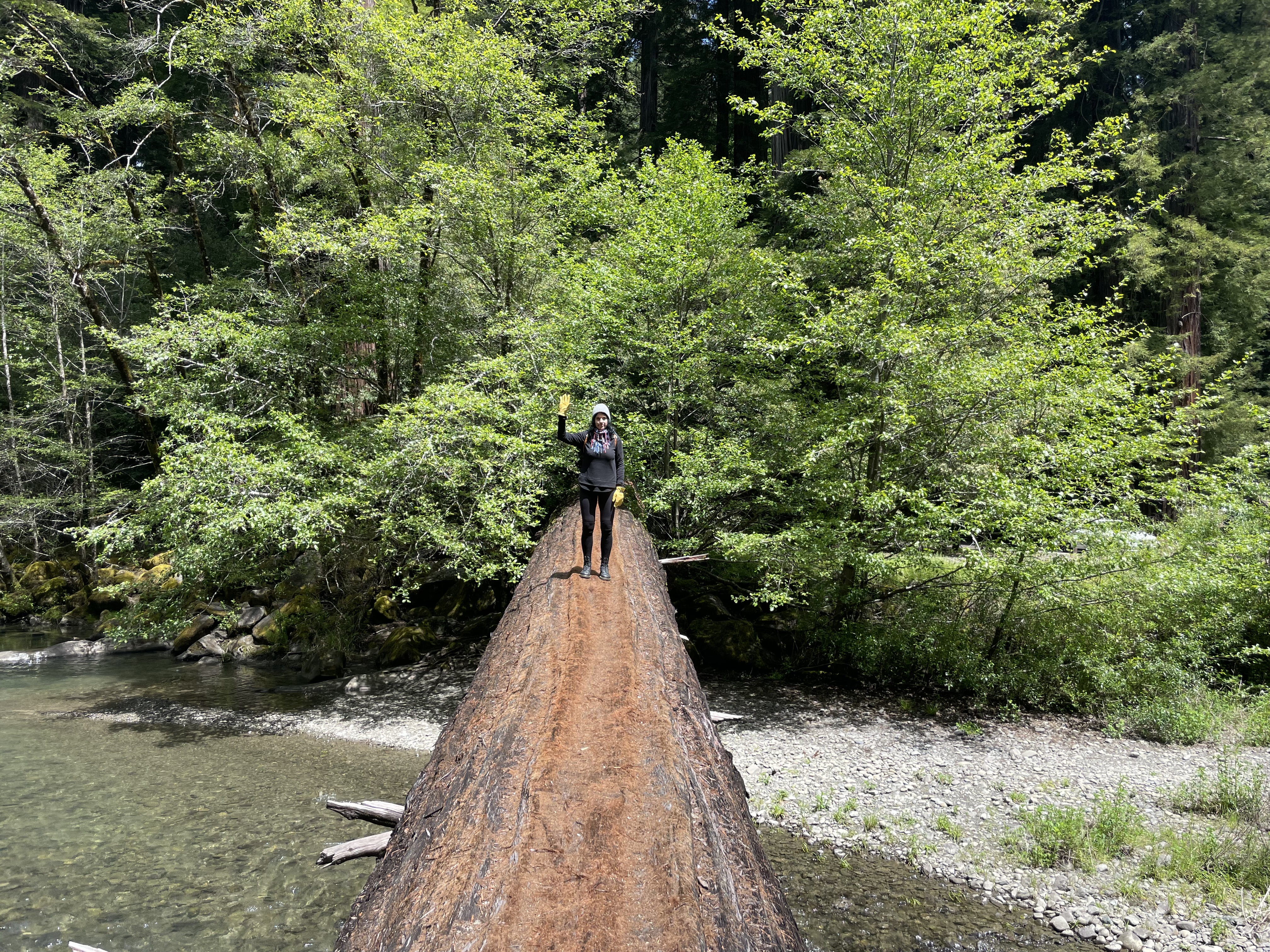 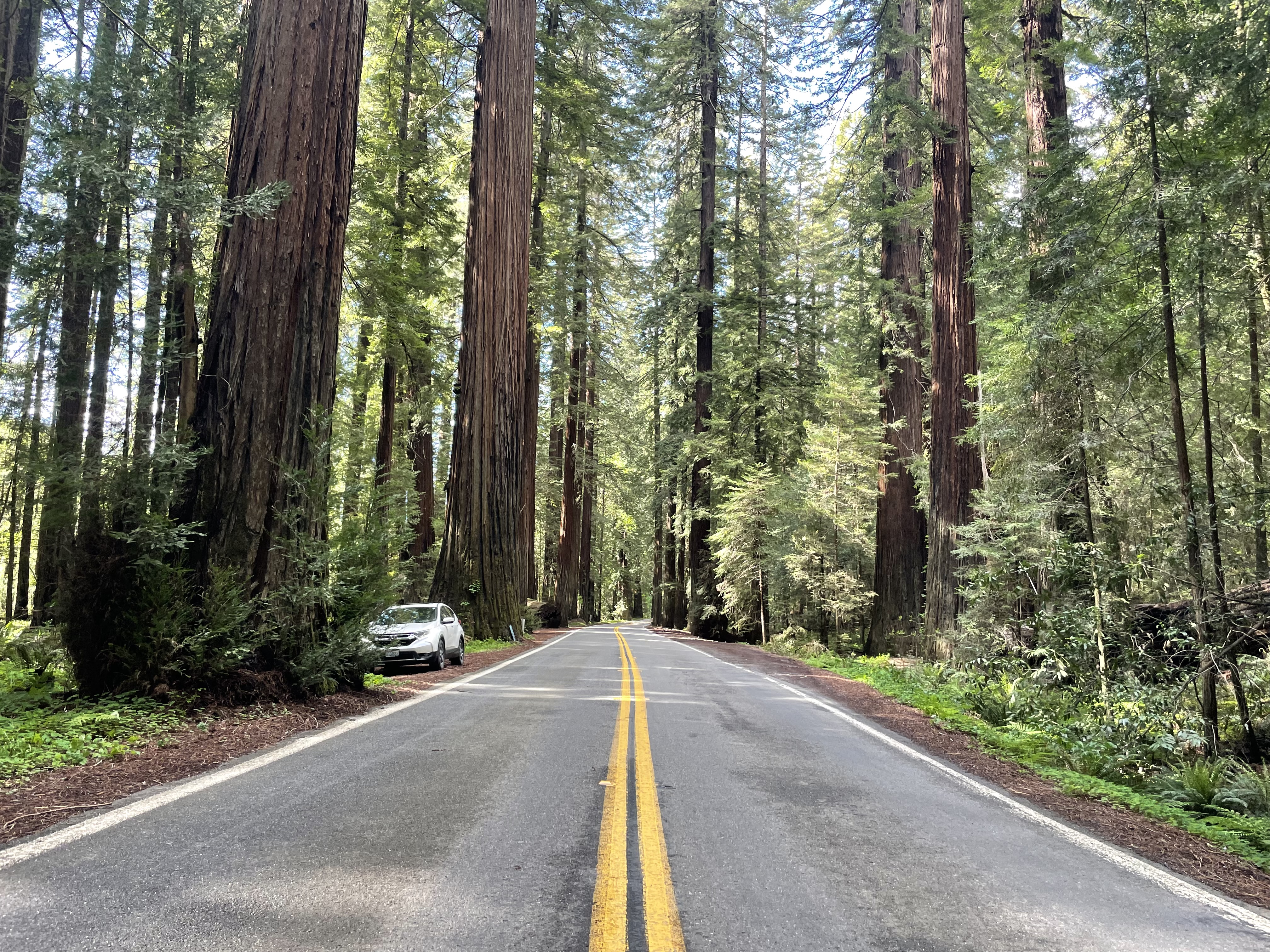 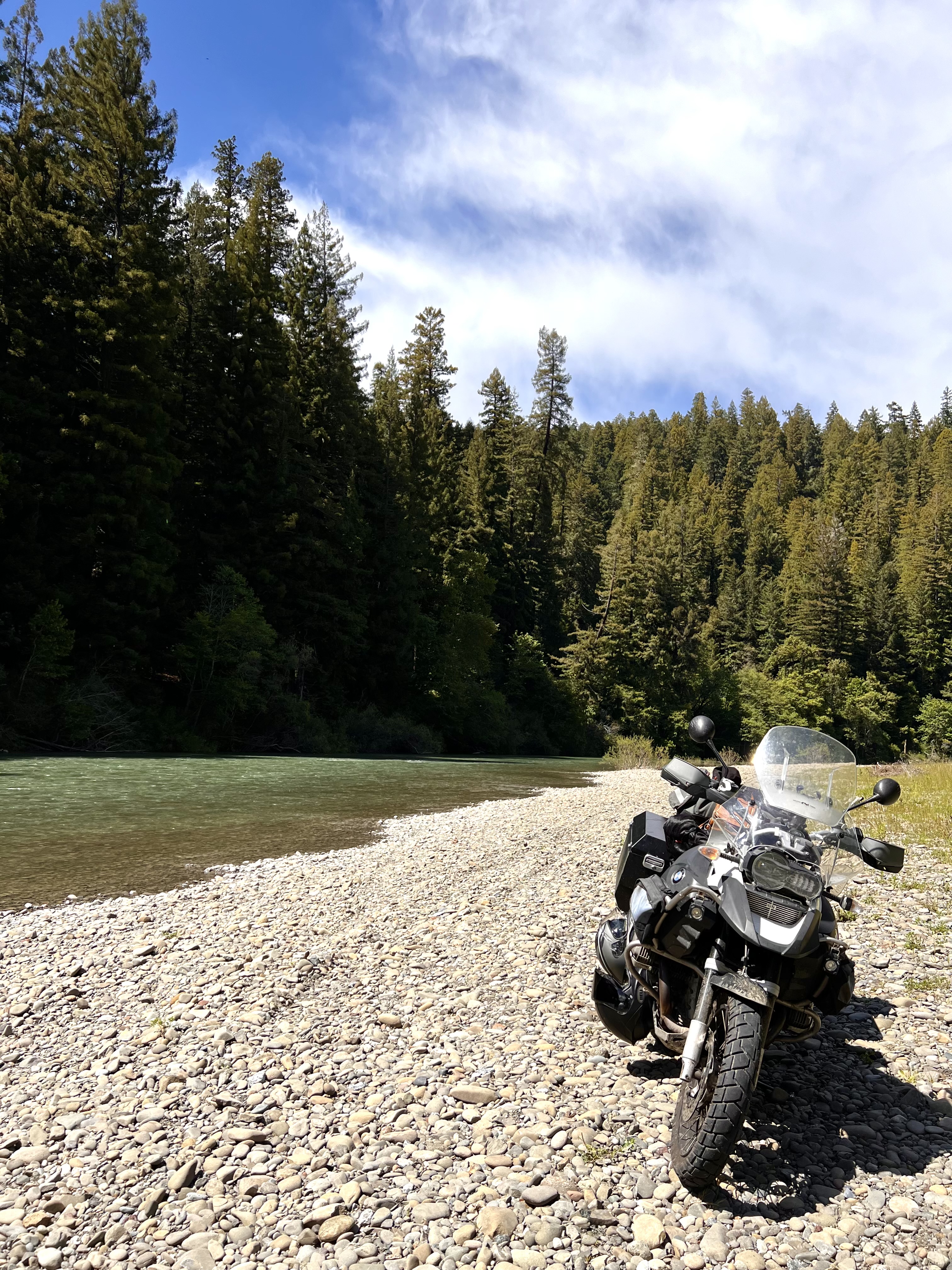 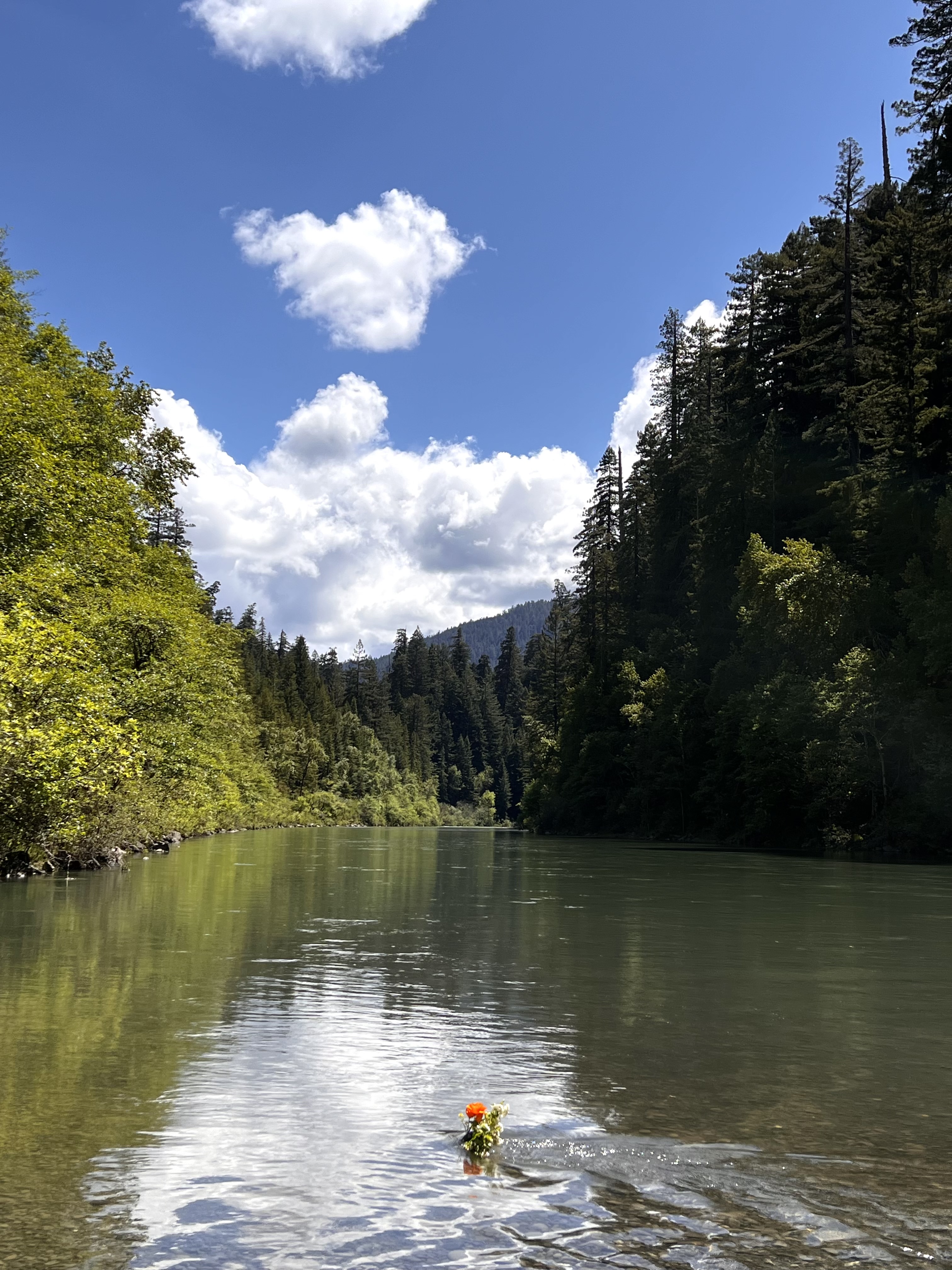 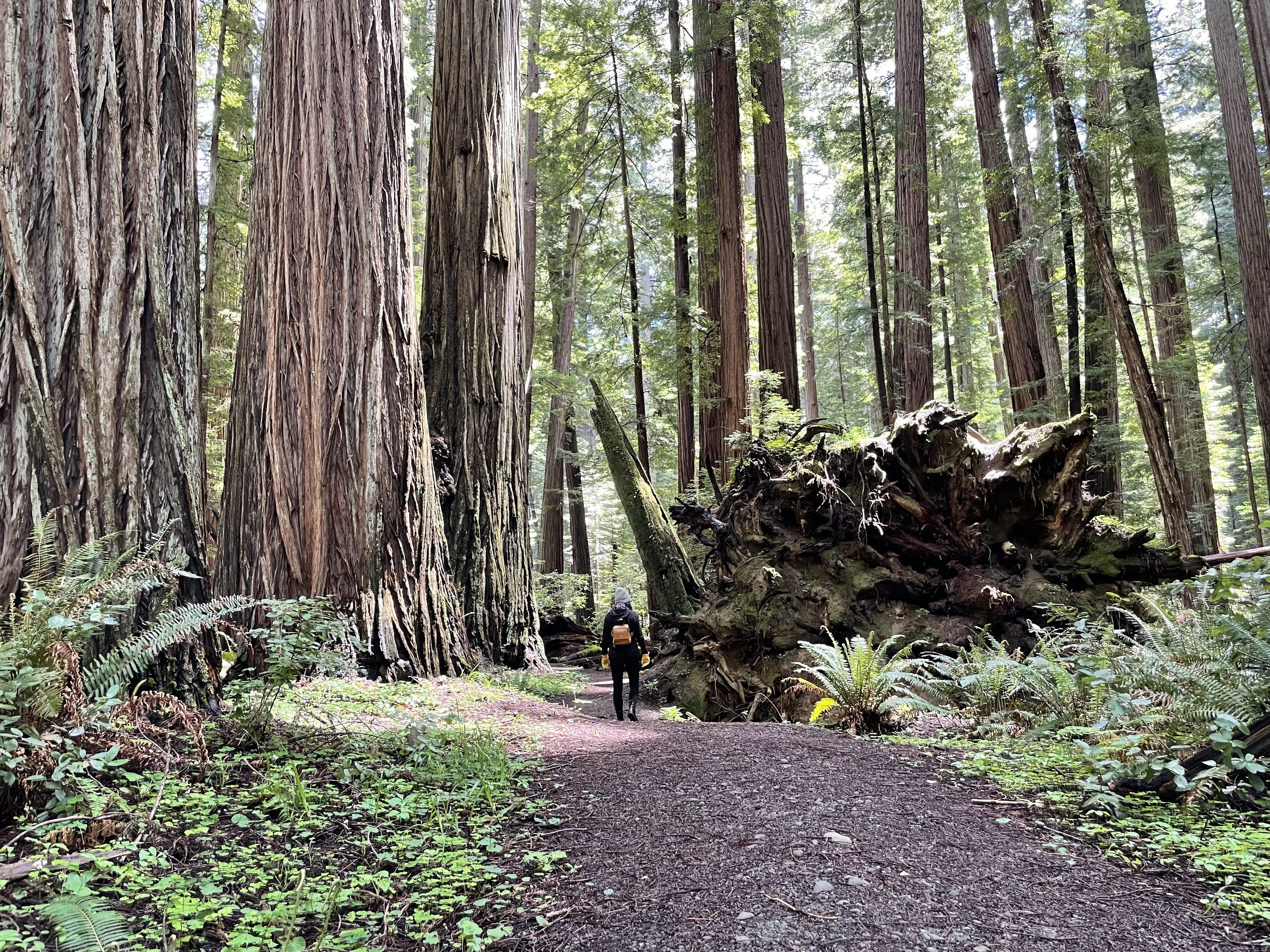 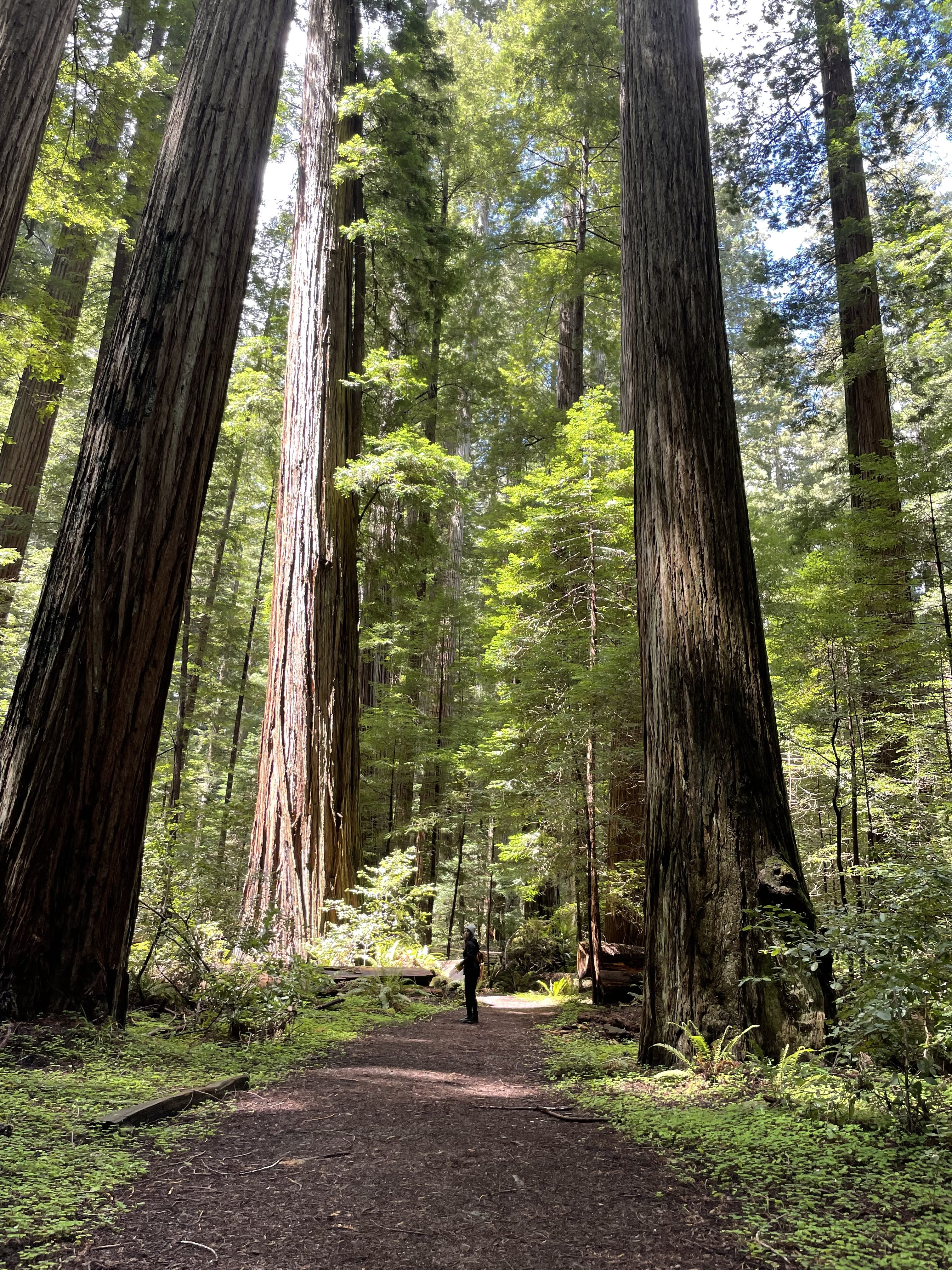 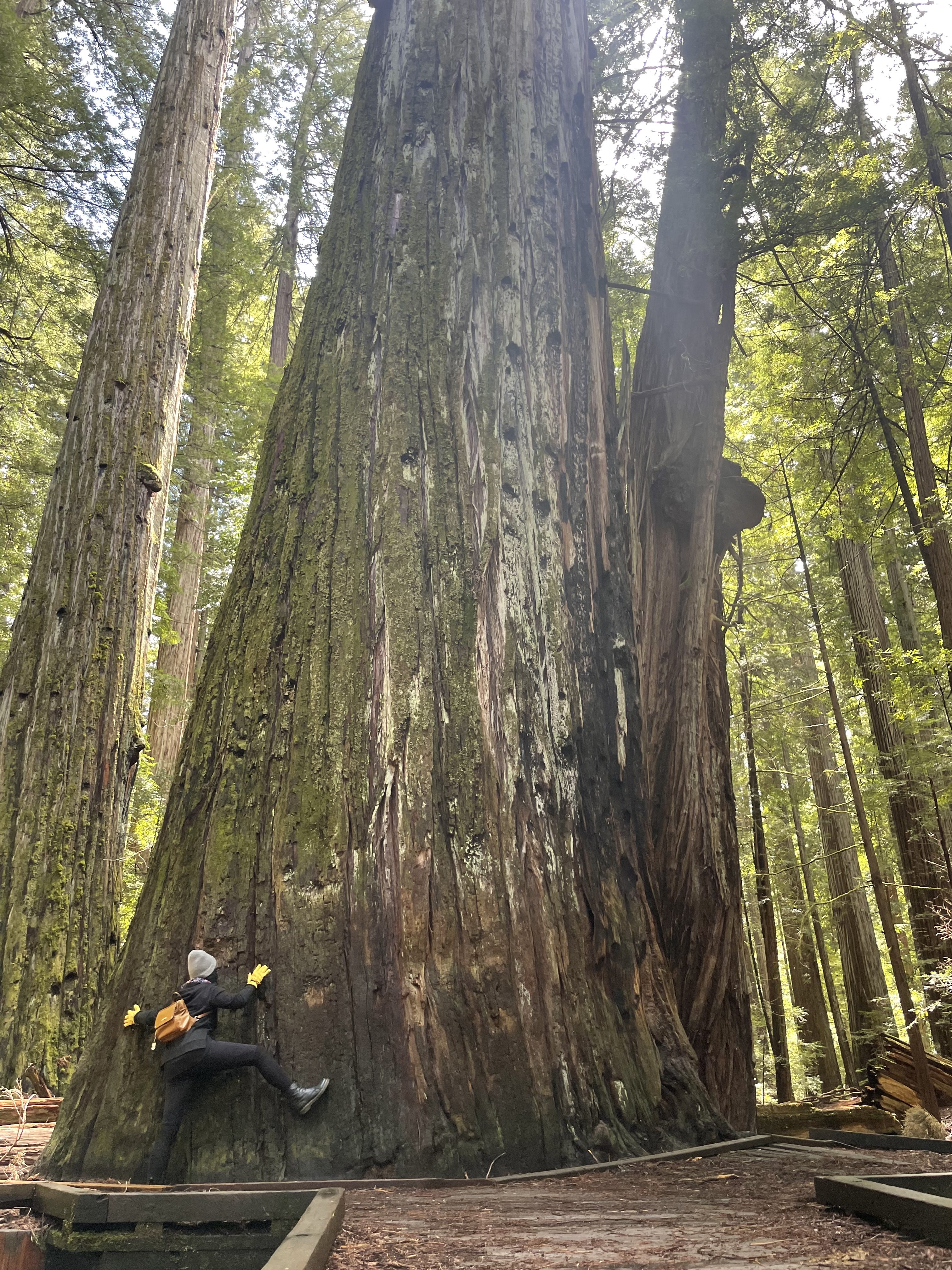 Trip – We then rode 2.5 Hrs further north to check out a hike from Cooney (he actually told me to go to the redwoods in the first place).  After opening the gate we did the Tall tree’s grove hike which has one of the tallest trees in the world.  It was the tallest but got a haircut by a windstorm a few years ago.  Again, just wild.  You feel like you’re in honey I shrunk the kids.  Everything just takes your breath away.

Bike – So it was 45-50 degrees and chilly.  With all of the fairings the bike kept us out of the wind and mostly not freezing.  We were both cold but nothing we couldn’t handle.  We did about 80 the entire way up, then turned onto a super bumpy logging paved road to get to the gate.  The gate then led down a 7.6 mile dirt road down the side of the mountain.  Bike again never skipped a beat.  after all of that we both arrived at the bottom without being beat up by the ride.  Again, bike did everything we asked and nothing we didn’t.  fantastic. 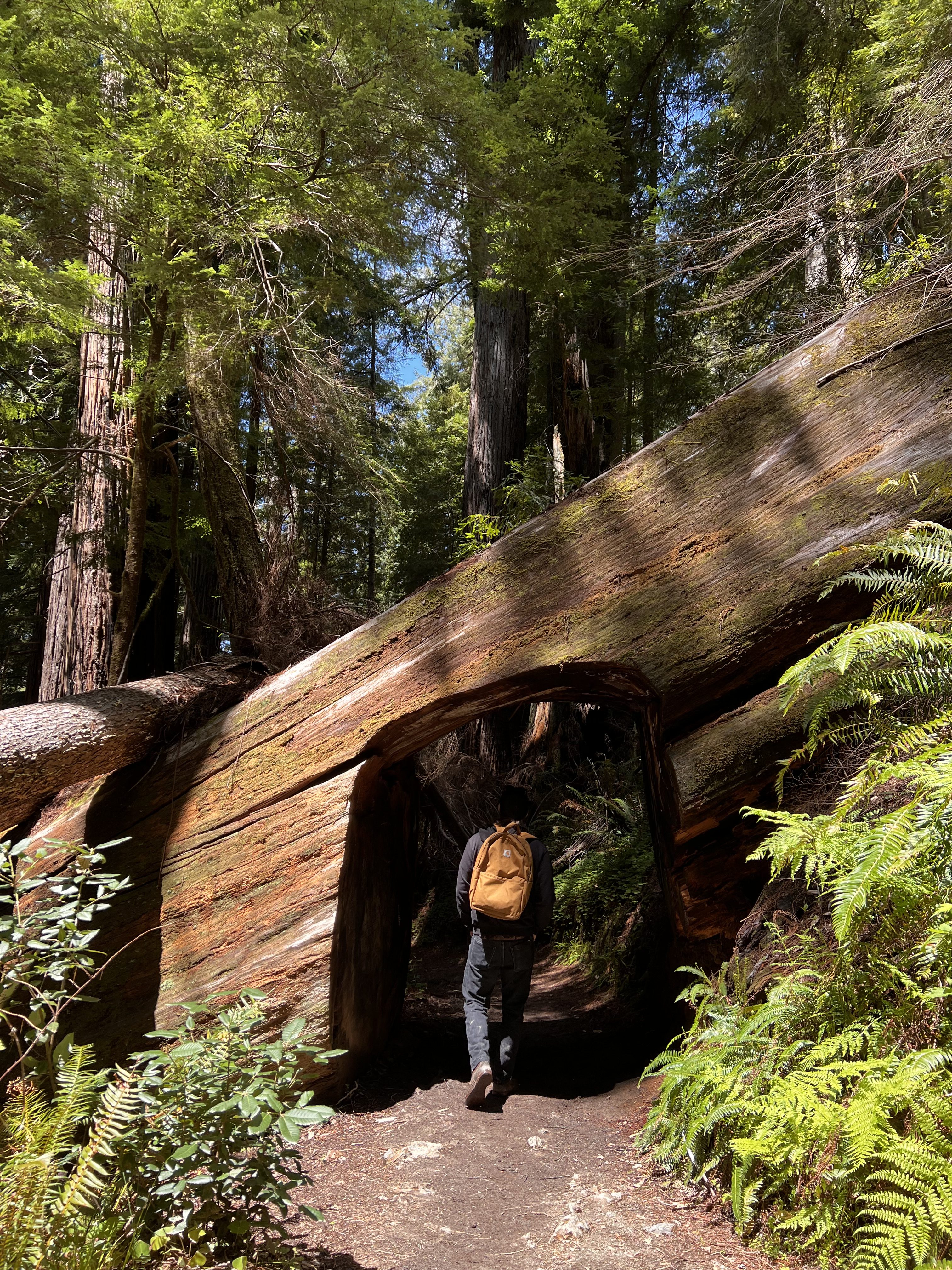 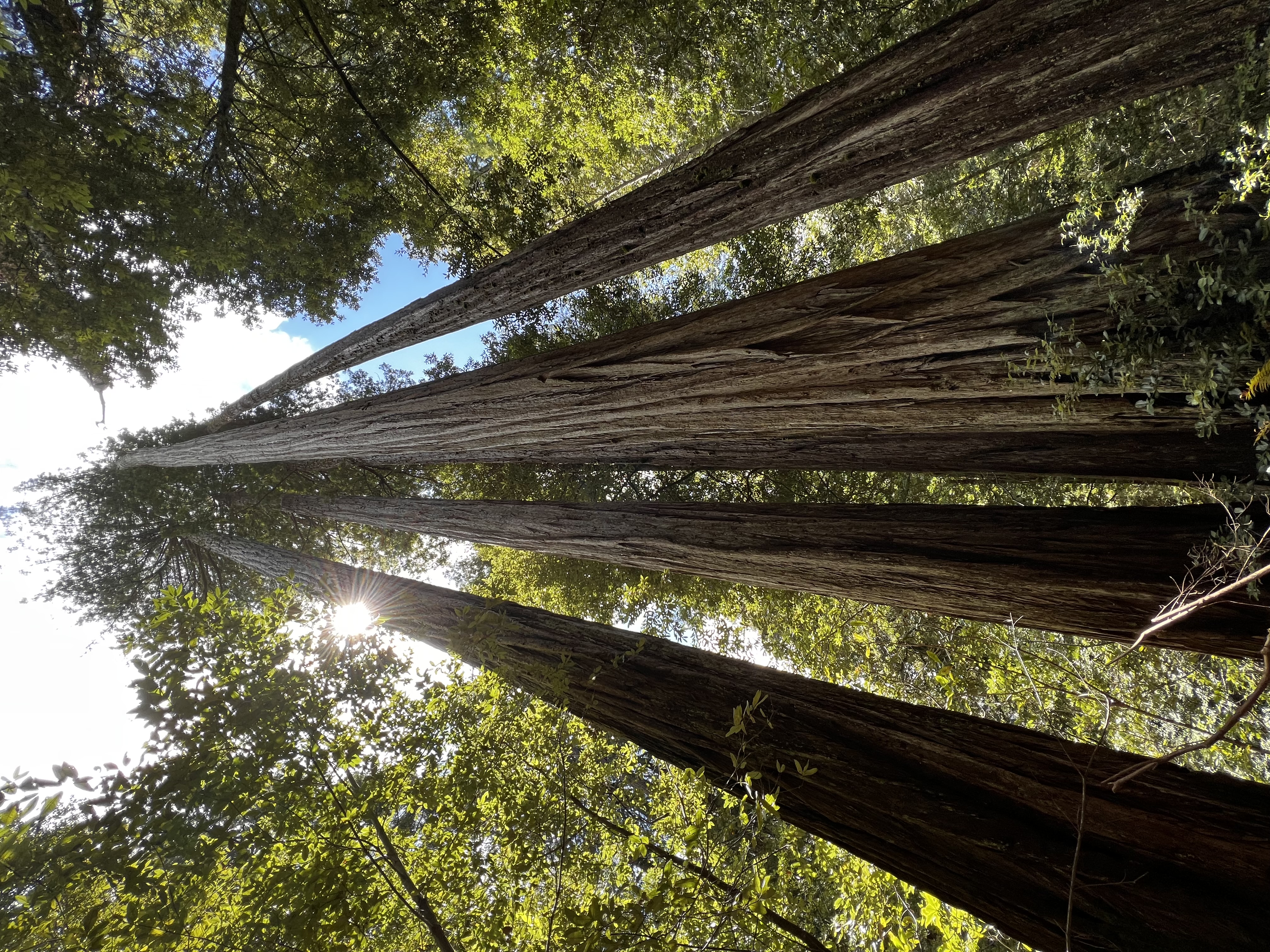 So it was now all over.  We jumped back on the bike and rode 5 hrs back to our hotel to go home the next day.  We decided to go back down rt.1 and it added about an hour to our ride… well worth it.

Trip – Unbelievably worth it,  I wish we had more time to just go exploring but because of the rain we only had a few days and wanted to check out what I had marked down.  I want to go back and just spend a week sleeping under those trees and finding every little nook to hide in.  I think to really get to know and appreciate a place you just have to sit there for a time and be quiet and just exist in that space.  sometimes it takes a few days, sometimes weeks.  I want to go back and just sit for a while.

Bike – now I am a person that likes the act of getting to a place more than the place usually so take that in mind.  The GS just blew me away.  After two turns the bike became your best friend that just wanted to see you have a good time.  It wanted to take you to the place, have you experience the place no matter where the place is, then take you back home.  It is not a dirt bike.  It can do dirt bike things, like ride on dirt, but it is not a dirt bike.  I think that is where the genius of the GS lies.  The goal of this bike isn’t to be the fastest, or the gnarliest, or anything really.  the goal of the GS is for it to be you.  It wants you to do what you want on it.  If you want to see where that dirt road goes… go.  If you want to make sure you and your partner can go on a trip and take everything you need with no compromises, it can.  If you wan to turn on the heated grips and just relax and take in the scenery, gotcha.  wanna see if you can keep up with your sportbike friends, bring it.  In being the master of none it lets you do all.   The only thing it doesn’t want you to do is pick it up… because I dropped it once in a parking lot. ow.

All in all we did about 900 miles in 4 days.  Not a ton, but not bad for that not being our Goal.  I think it says something that neither of us were over the bike by the end.

If you need me I will be eating my words about dadbod adventure bikes over at facebook marketplace…. 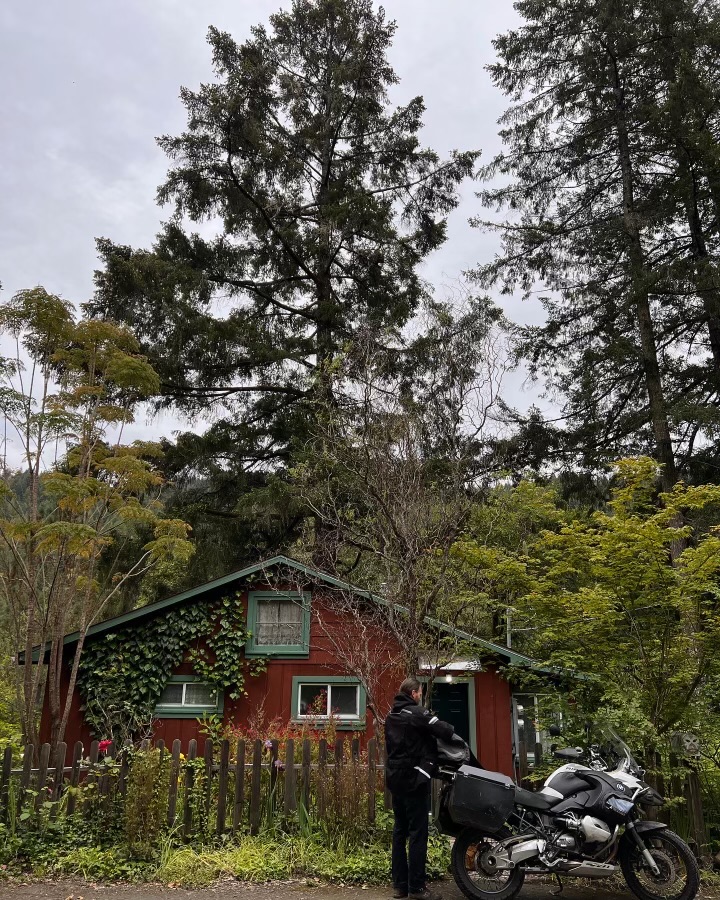 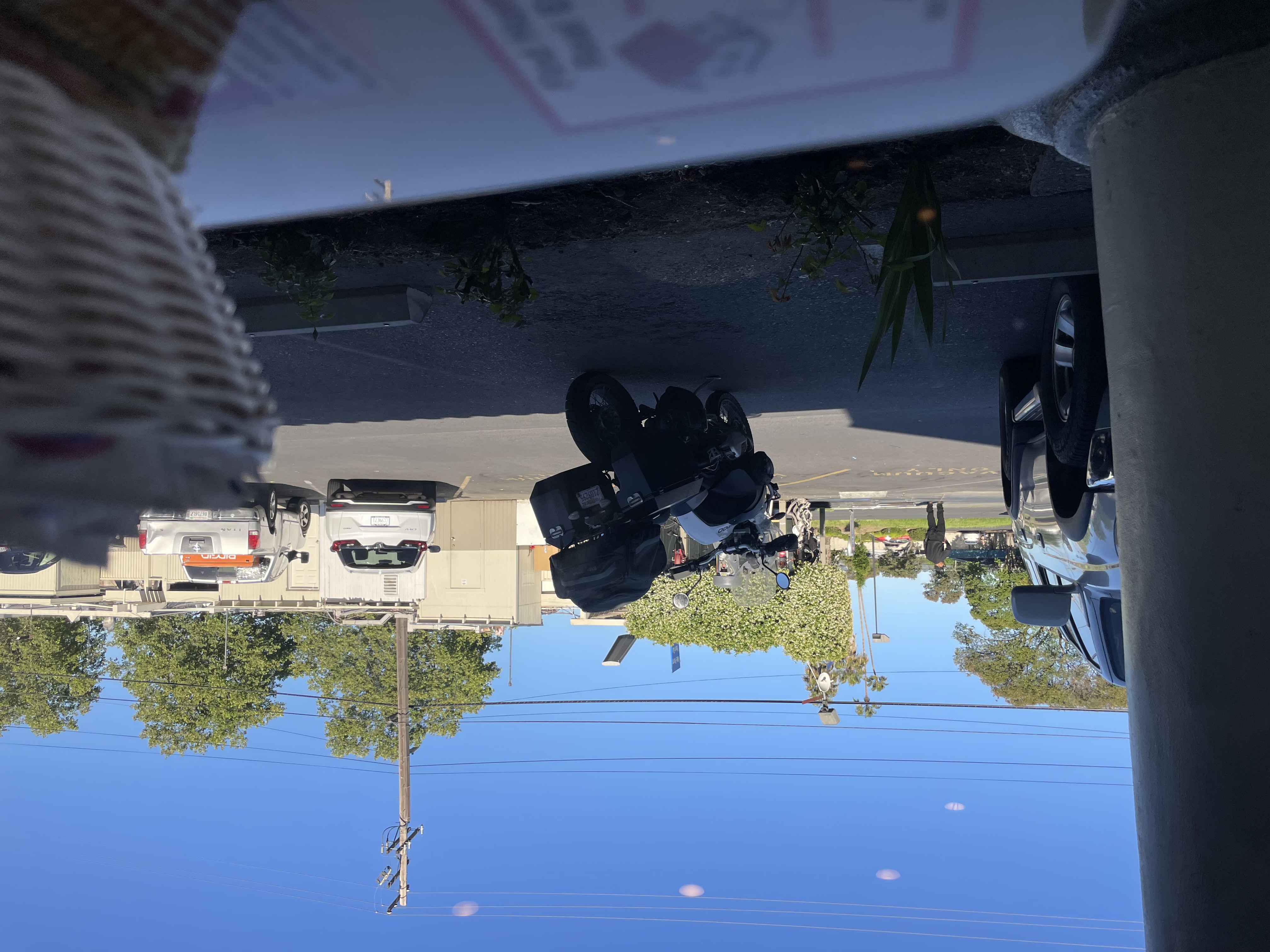 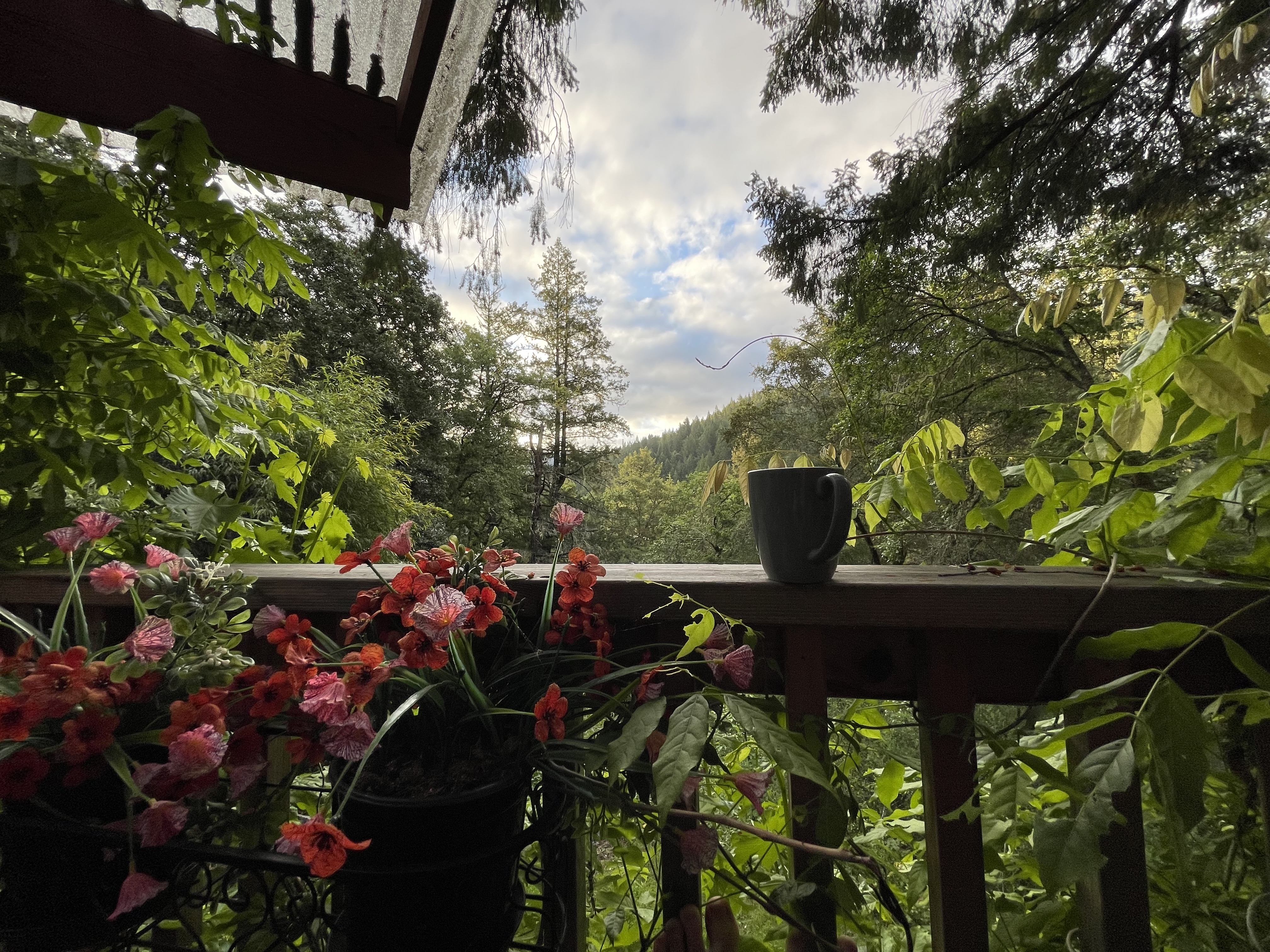 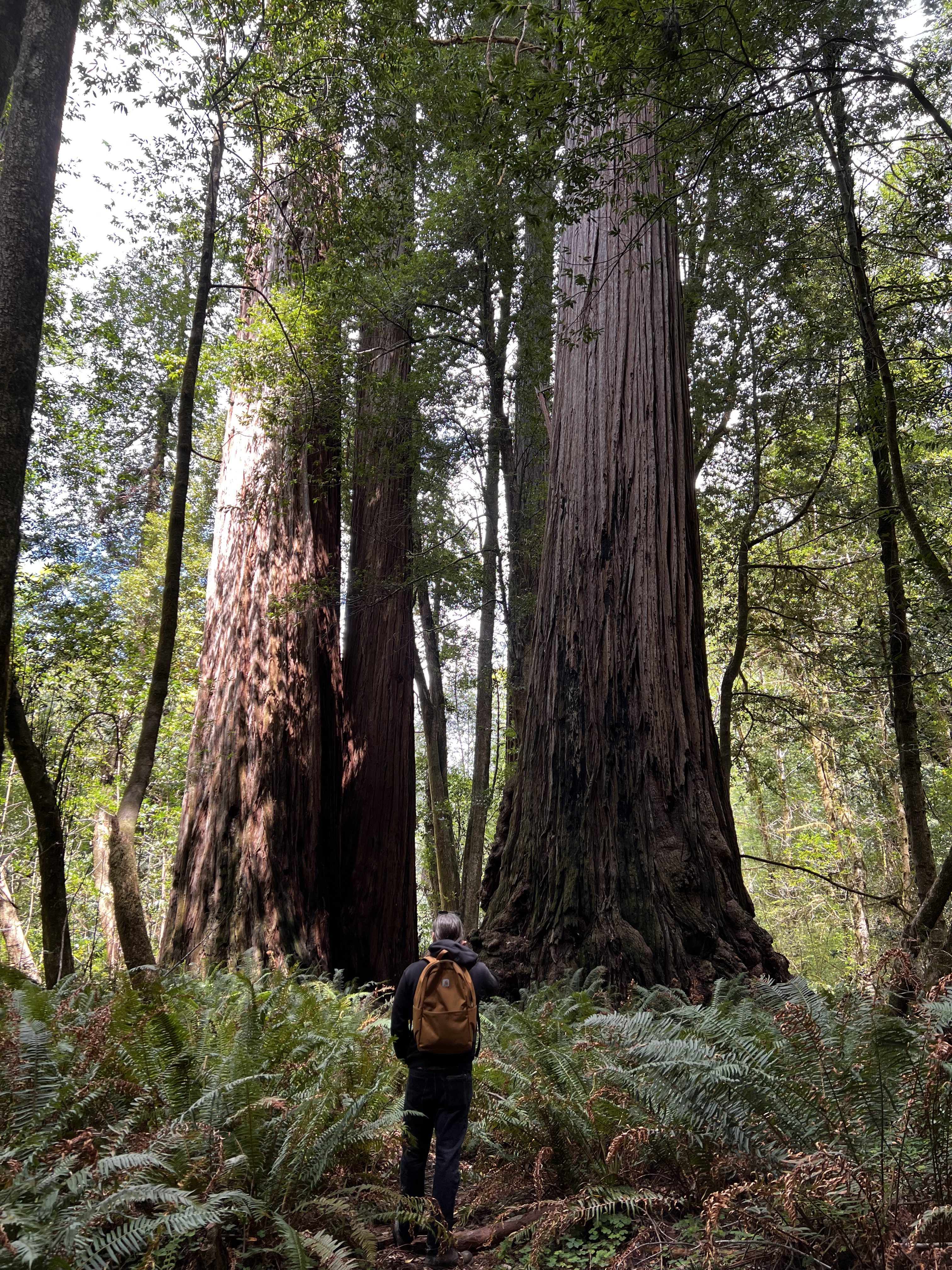 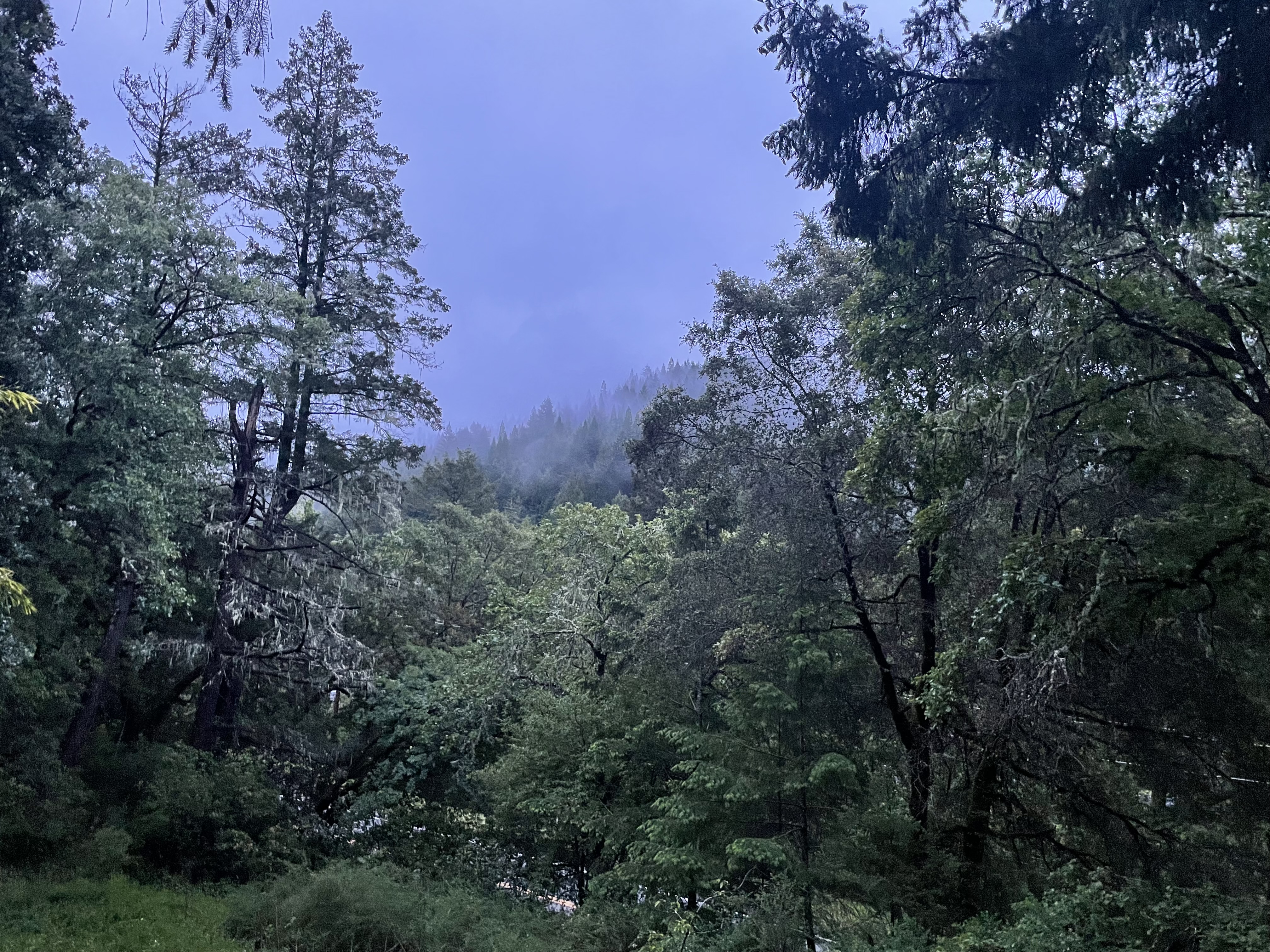 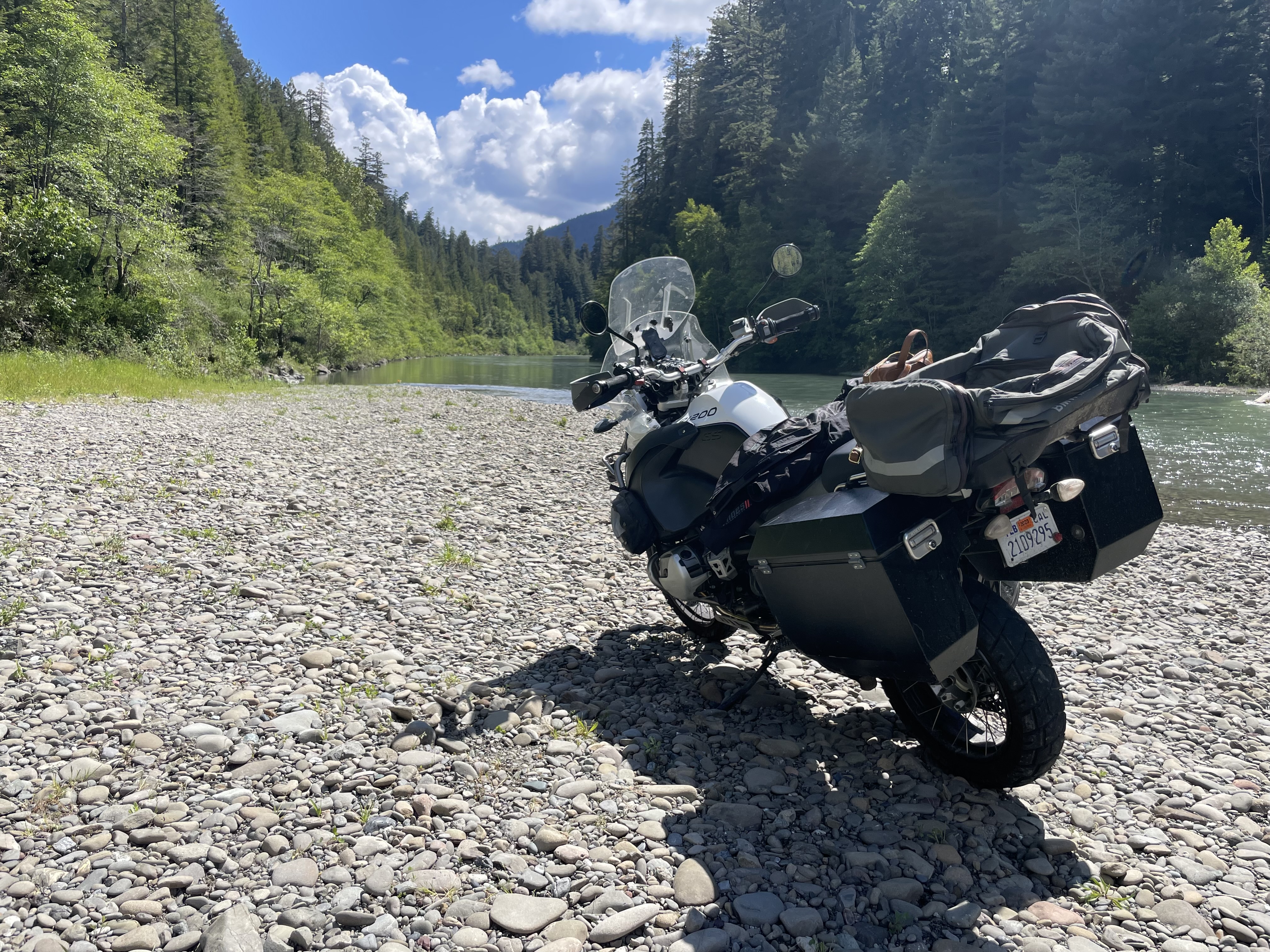 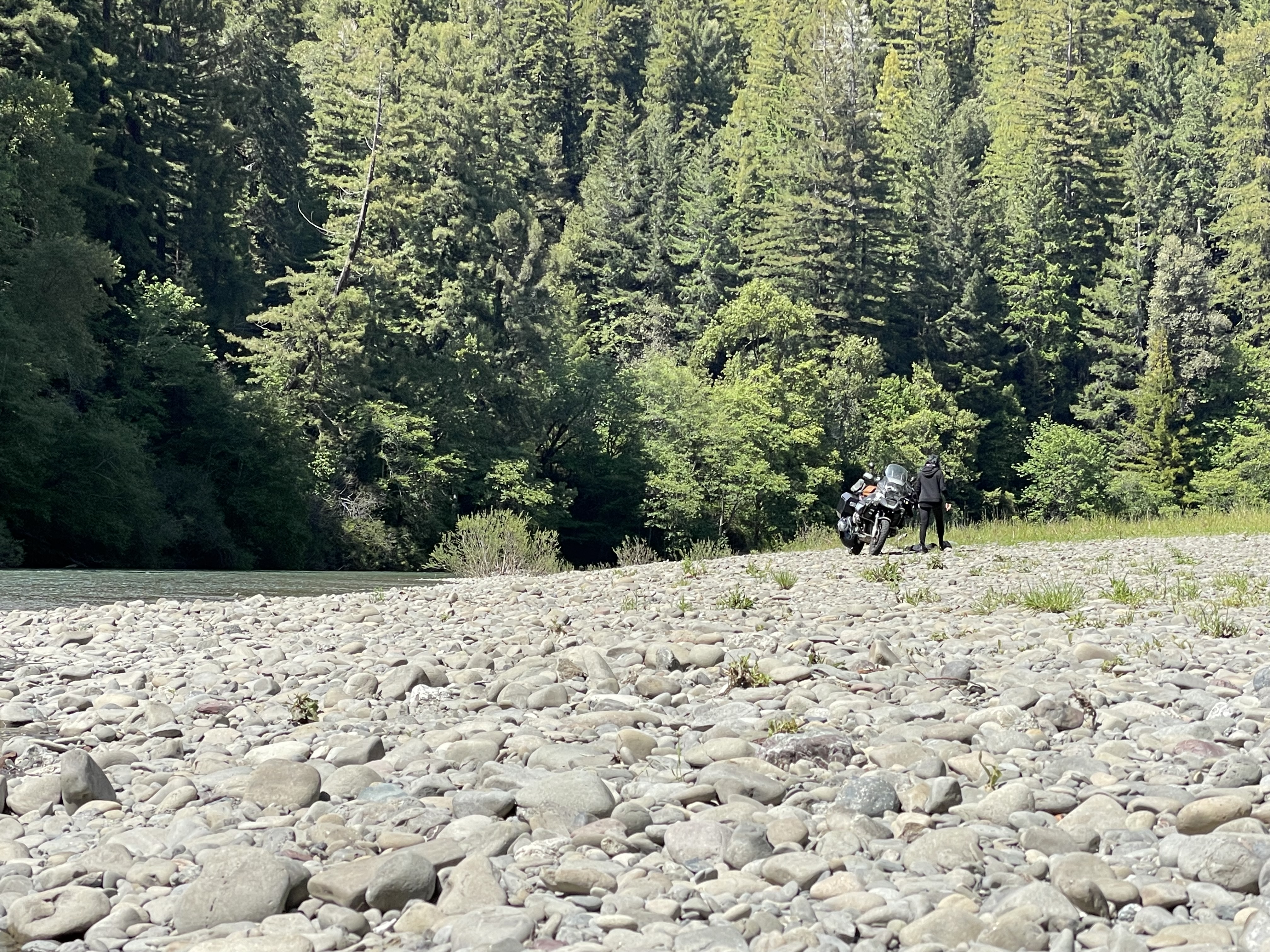 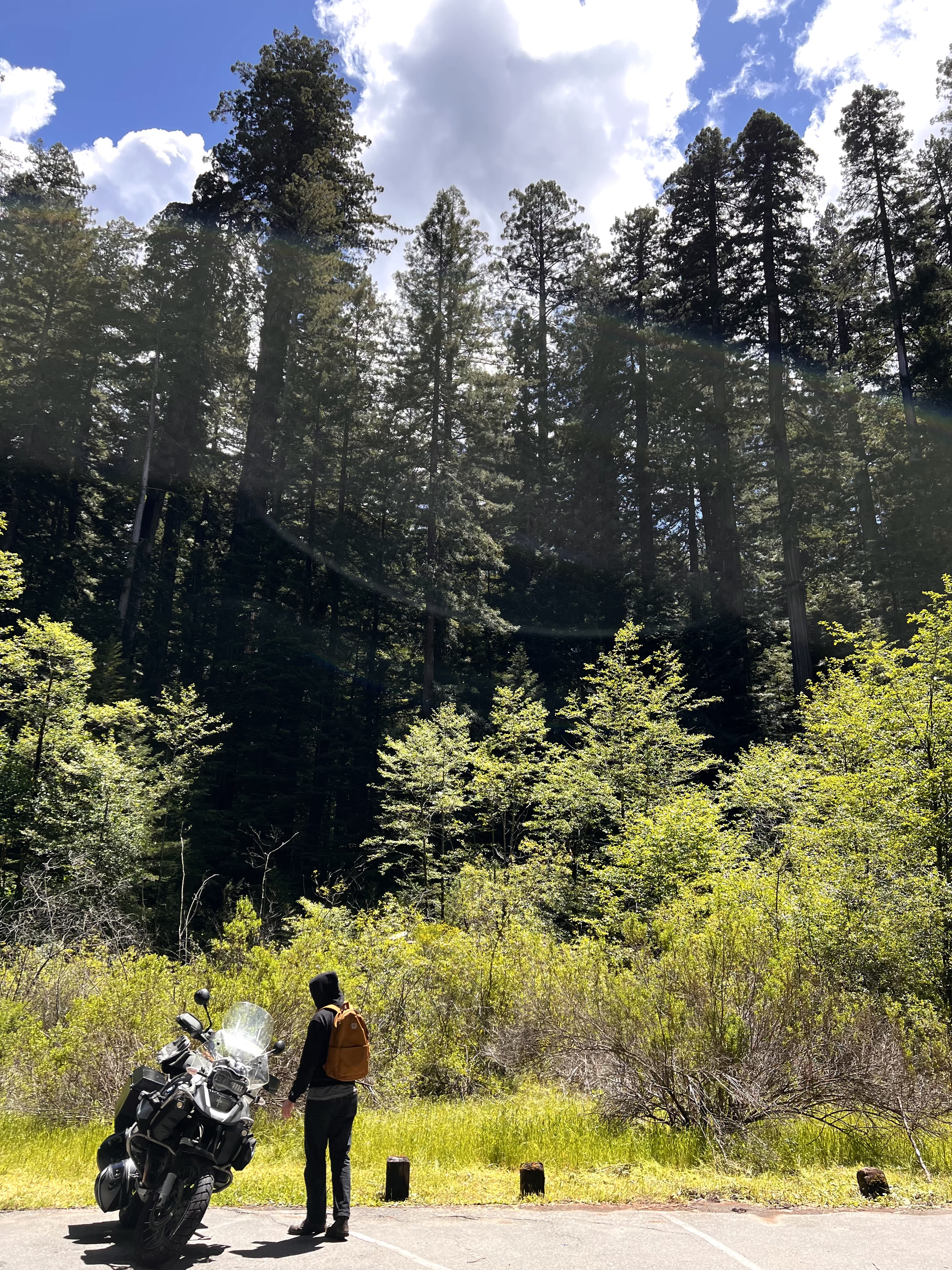 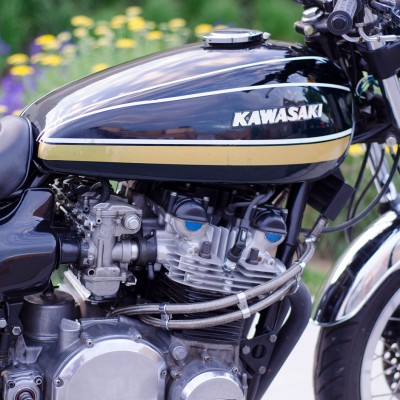 I don’t think this is a topic anyone has ever talked about on this site. Everything below is super self-explanatory, so, scan as necessary… I always go for the cheapest auto insurance. I have Progressive mc insurance. The maximum number of motorcycles you can have per policy is 4. For the bare minimum coverage of […]