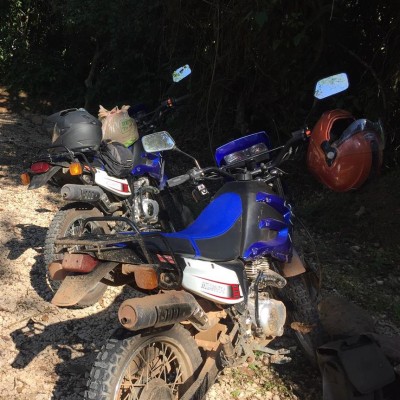 I awoke well before the roosters started crowing and the sun had yet to rise. I snuck out to see what I believe was my first sunrise over the ocean. The Caribbean sea lay flat like a sheet of glass. Very quickly the sun was on the horizon, then I headed back to the hostel to see if Waldo was awake and ready to hit the road.

We headed north on the Southern towards Dangriga. It was on this stretch that we saw the wildest thing on the highway we had seen all week. We were behind two Old American school buses, which are used for public transportation; the locals call them the chicken buses. Suddenly one decided to pass the other, which seems odd seeing two buses racing, but hey, this is Belize. Then out of the blue, a tiny little Honda blasts past Waldo and I, and attempts to shoot the gap between the passing buses. I was rooting for the Honda, but he soon realized he couldn’t do it, so he hit his brakes, ripped to the left berm, and passed there quickly. Sick moves Vin Diesel. That’s the moment I fell in love with Belizean drivers. Waldo, on the other hand, had a very different opinion.

We reached the Hummingbird Highway and turned north towards the Cayo District. The first stretch was decently flat that yet again passed through countless orange groves. The smell of citrus punching you square in your olfactory system. I had come later to find out that most of the citrus and fruit grown in Belize is grown by Mennonites. We had seen them on the way in, but had no clue to the extent of their presence. Turns out they own and farm tons of land in the country. Being a central PA boy, I felt kind of at home seeing them. The Hummingbird Highway was moderately busy. They run everything on this road, including full size 18 wheelers. Remember how I said earlier that the highways are what we consider a backroad at best? Throughout the highway the rivers are crossed with one lane concrete bridges. Often times you wait in a line to cross these bridges. The flat lands of the Stann Creek district soon led way to the Mayan Mountain passes of the Cayo district. This is where the Hummingbird came to life. The Meilun’s kept pace a 60mph very easily, except when heading up the steeper uphill climbs. They tend to feel like a moped struggling towards the top even down in 3rd, but they were workhorses and made it up nonetheless. The twists and turns, ascents and descents, led us through the peaks and valleys of the Mayan Mountains. I had smiles for miles. I fell in love with this stretch of road. At certain points you could see the bright white limestone rock peeking out where jungle did not grow. Belize is made up mostly of limestone, which in turn is why they have such a vast network of caves. 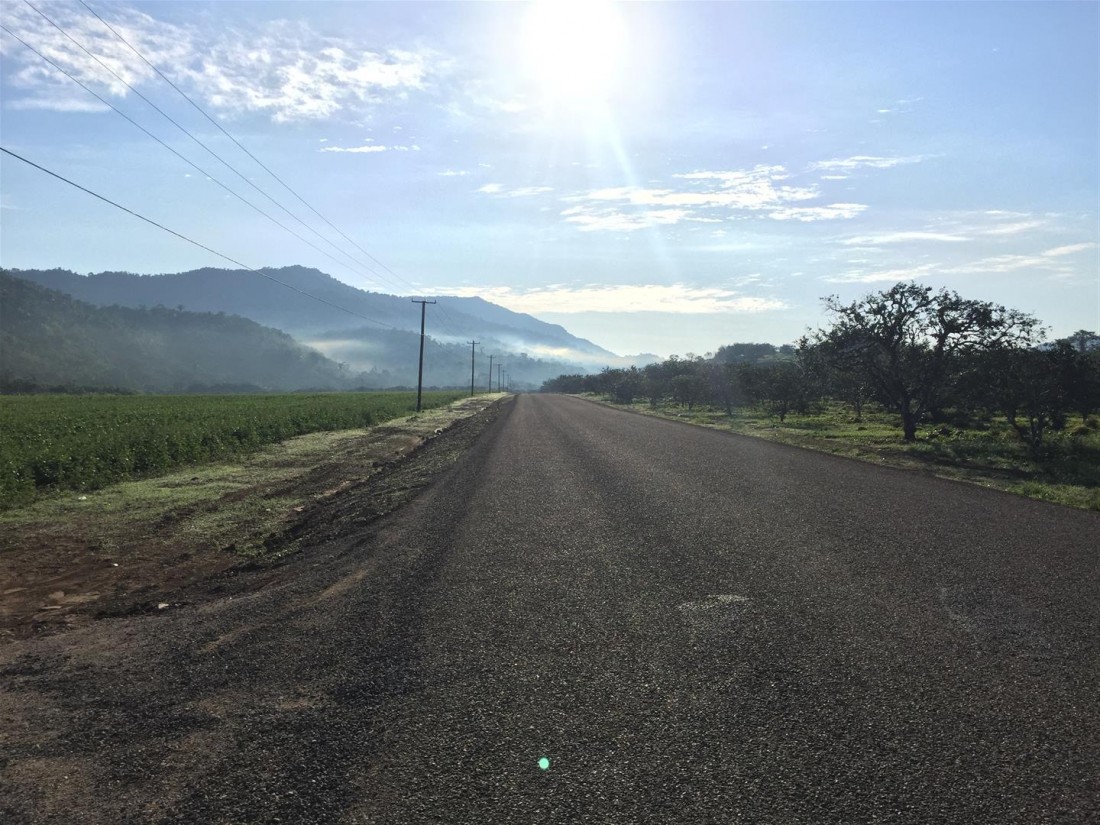 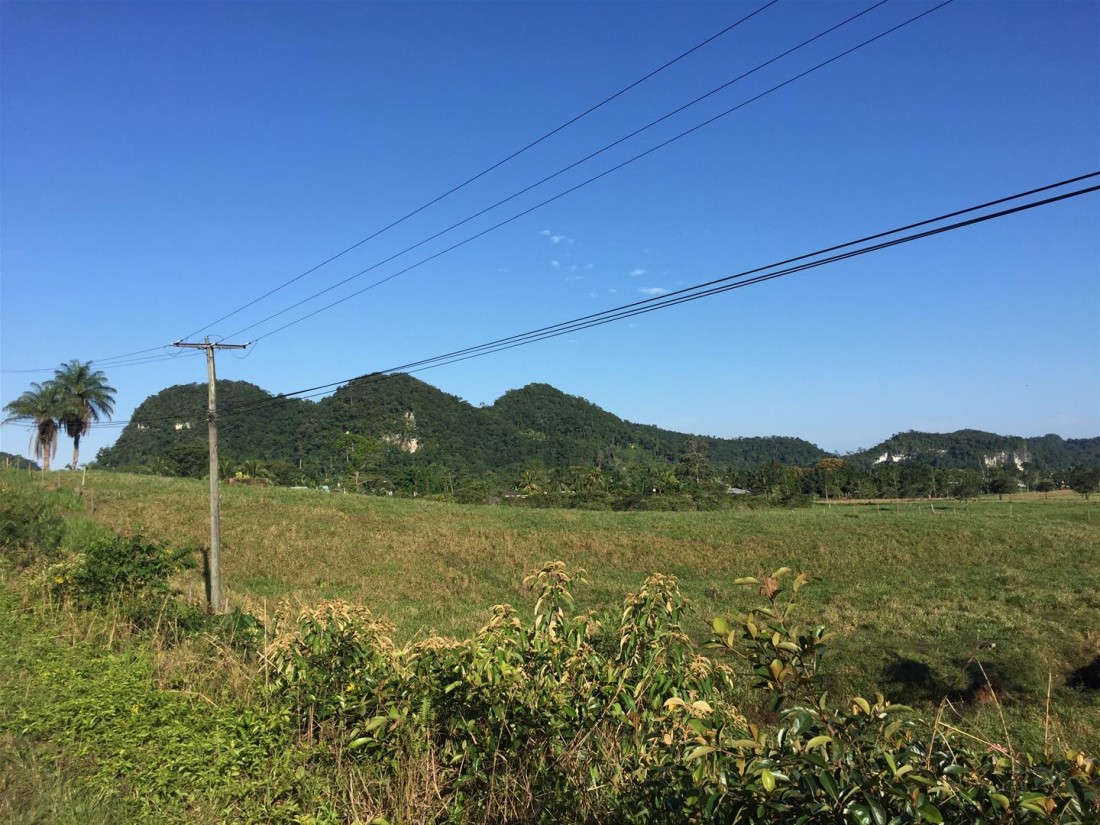 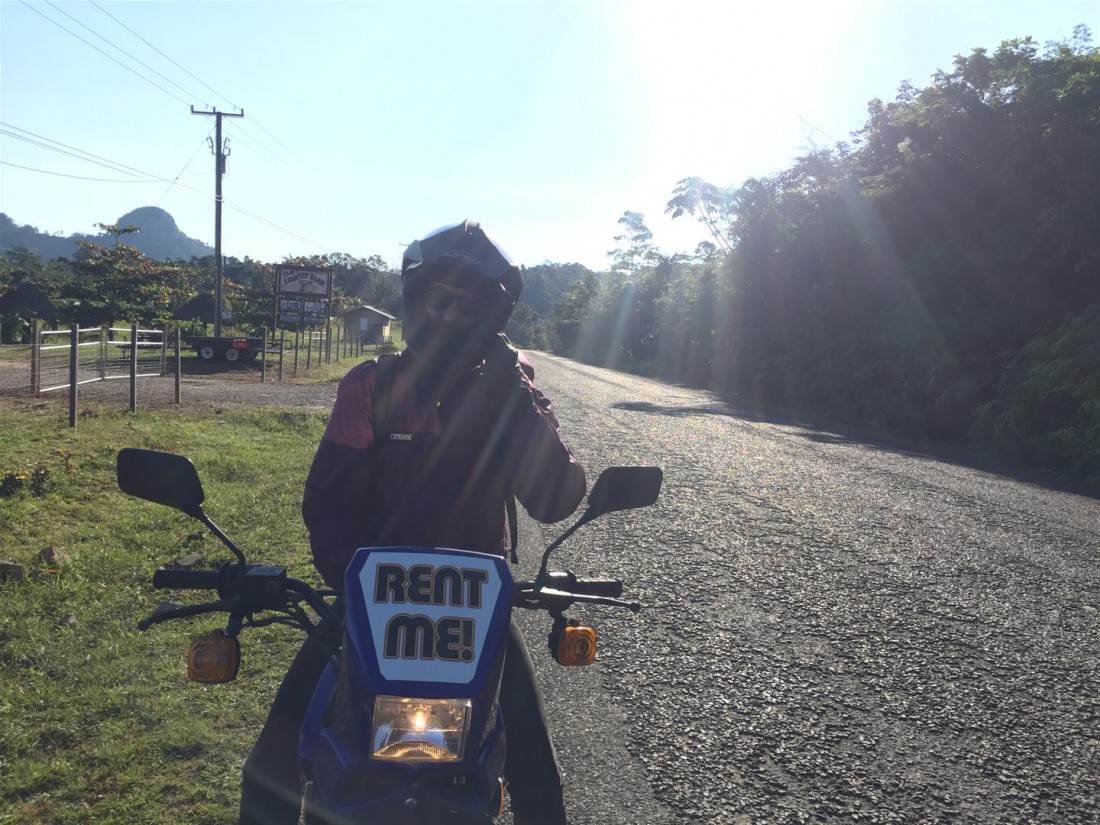 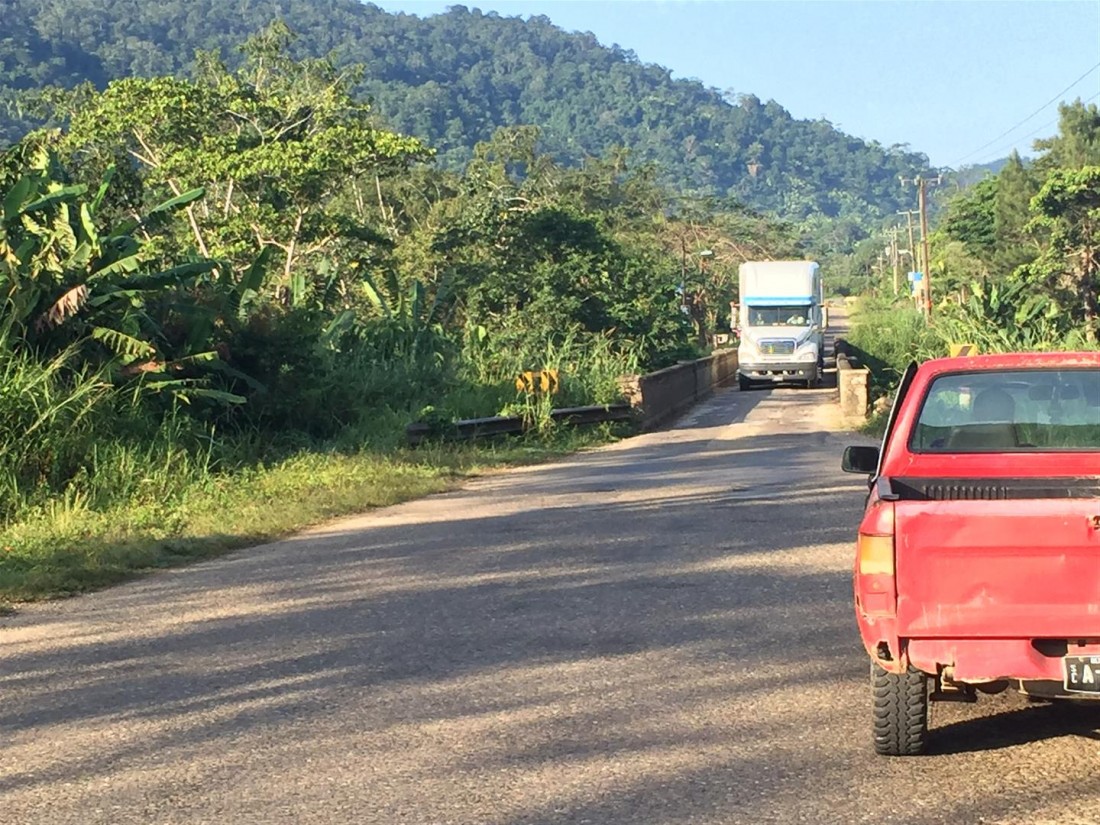 The hour and a half ride to St Herman’s cave went by way too fast. I was really getting into the mountain section before it was over. Oh well, I still have the ride back to Hopkins to repeat the twists and turns. We arrived early and met our guide for the tubing trip. Since we had time, he suggested that we head into the nearest town and get some food, so that’s what we did. We found a small thatched hut he recommended in the town of Armenia, which is the last village on the Hummingbird before hitting the capital of Belmopan. What we needed was coffee. True to the rest of the coffee we have had, it was terrible & instant, but we put it back anyways. After downing the coffee flavored water, we headed back to the cave. 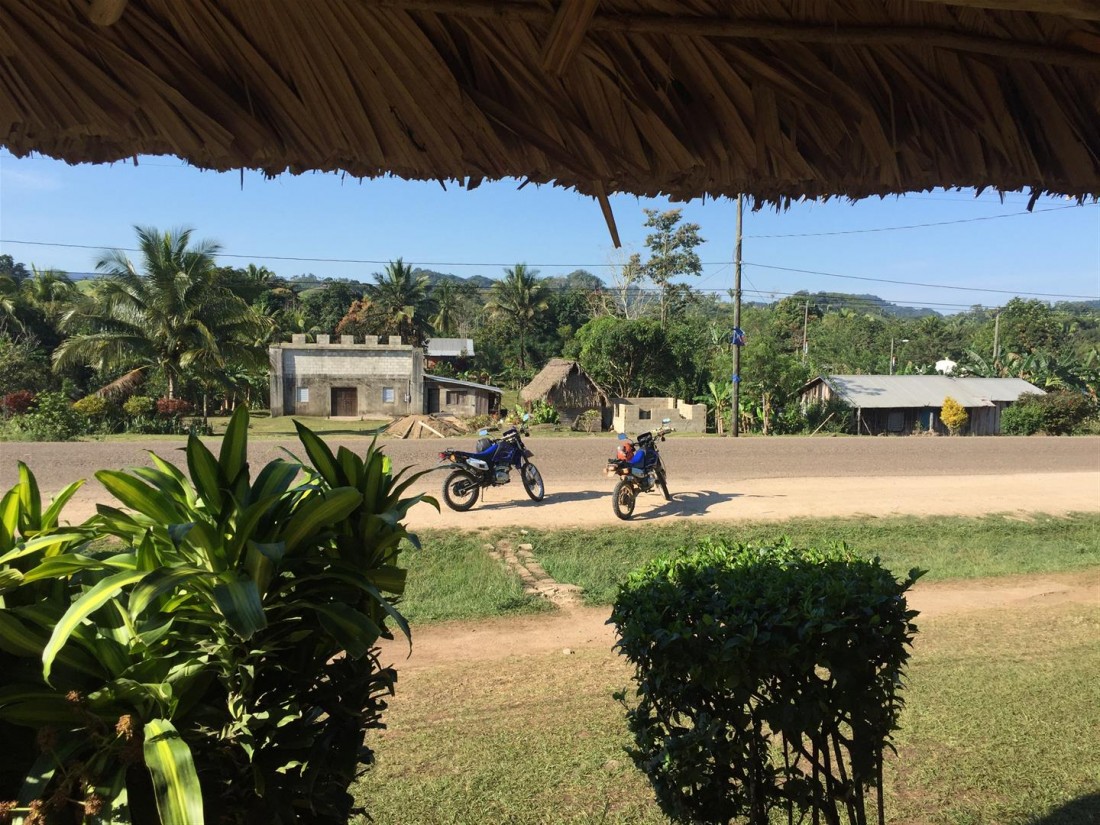 We parked the bikes, changed into our swimming gear, and waited for the other people joining us for the trip. Once they arrived we did a small hike back into the jungle stopping to look at rubber trees, banana trees, leaf cutter ants, and other exotic flora and fauna. Soon we reached the mouth of the cave. We climbed into the belly of the beast and our guide took the time to explain to us the significance of caves to the Mayan culture. The Mayans see the caves as the entrance to their underworld, reserving it for sacred rituals. Only the spiritual leaders, their helpers, and those being sacrificed were allowed to enter. I will not go into too many details on what we learned about ancient culture, but our guide was very informative and the stories were just as interesting. Look into mushroom/fermented honey/toad skin enemas. Talk about a party. This cave in particular was not used for Mayan rituals, unlike the cave we would be going to in two days. That particular one still has human remains scattered about in its ceremonial chamber. As I stated earlier, Belize is covered in caves both wet and dry. We hiked deep into St Hermans. Waldo used a brief moment of silence to alienate and offend the nice Midwestern couple with a good joke.

“Hey Nate”
“Yeah?”
“You know the difference between this cave and your asshole?….. Not as many men have entered this cave.”

I lost my shit and almost popped a vein cracking up, but the Midwesterners did not find this so funny. A very awkward silence fell on the group for the next 20 minutes. He would go on to use this joke in every cave we visited. It wore out its humor with me the fourth time i had to endure the punchline.

We got in the water and floated in the subterranean river for an hour. I have tubed many times in my life, but never in a cave. It was quite an experience. At one point the guide had us all turn our headlamps off. Within a few short minutes, sensory deprivation had kicked in. When the instructions came to turn them back on, we were in a chamber filled with sleeping bats. The float went on for a little while, then we had to pick up the tubes and hike back to the mouth of the cave. From the inside the opening looked like you were standing in a serpent’s mouth looking out. The stalactites and stalagmites acting as the beasts teeth. On the way out, we discussed the different wildlife we had seen so far with our guide. He suggested we try Gibnut, which is the larger cousin of the Agouti we saw the previous day. When Queen Elizabeth had visited Belize, she was fed it without knowing what she was eating. She enjoyed it so much she dubbed it “The Royal Rat”. I knew I had to try Gibnut before I left.

We made it back to the parking lot, changed and thanked our guide. The Midwesterners wished us well but I am sure were ready to see us go. Back on the bikes, we rode a mile up the road to check out the Blue Hole. This is not the infamous Belizean deep sea blue hole, but the inland underground river fed Blue Hole. Our stopover here was short. We got back into our jeans and ripped south on the Hummingbird back towards Hopkins. Again, I had too much fun ripping through the mountain passes. 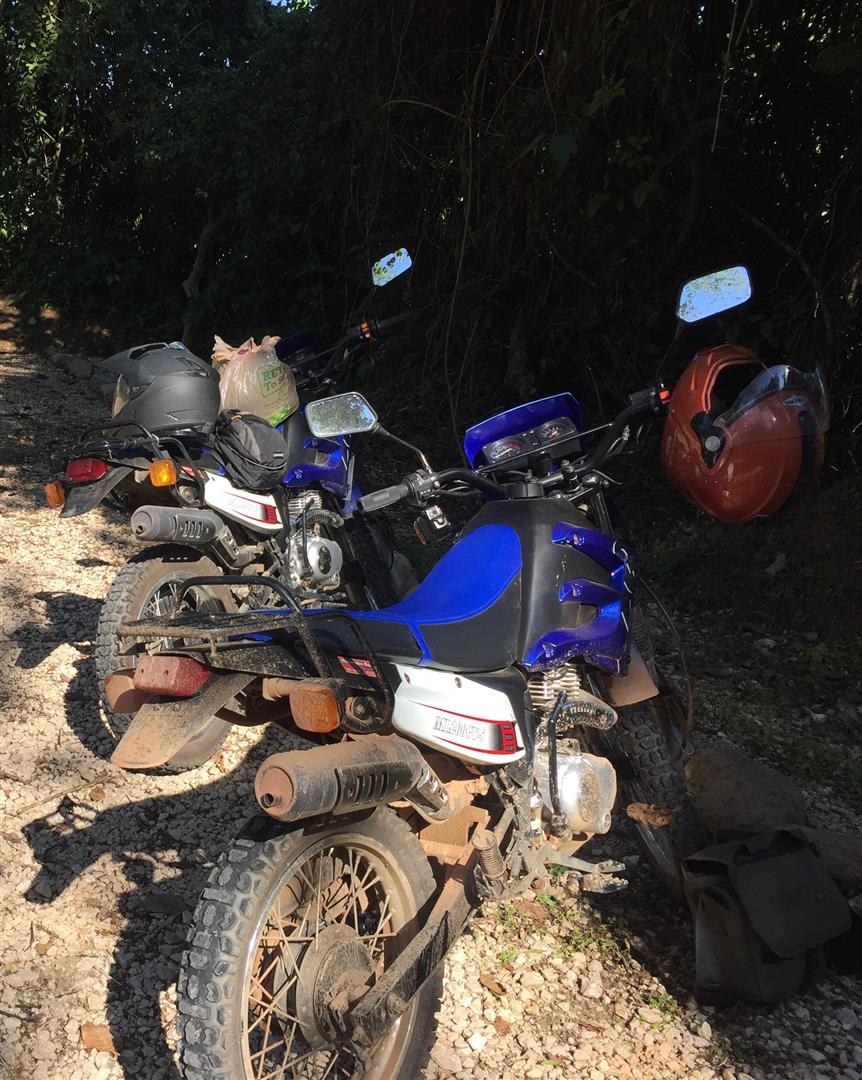 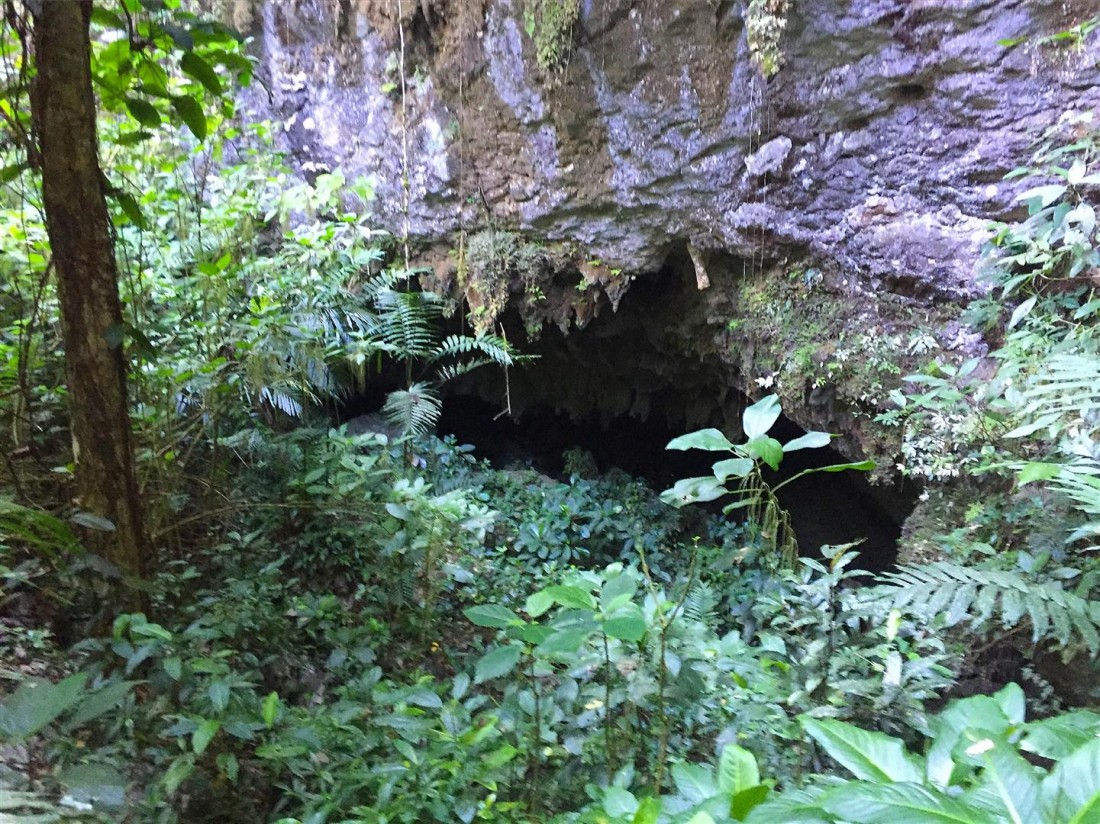 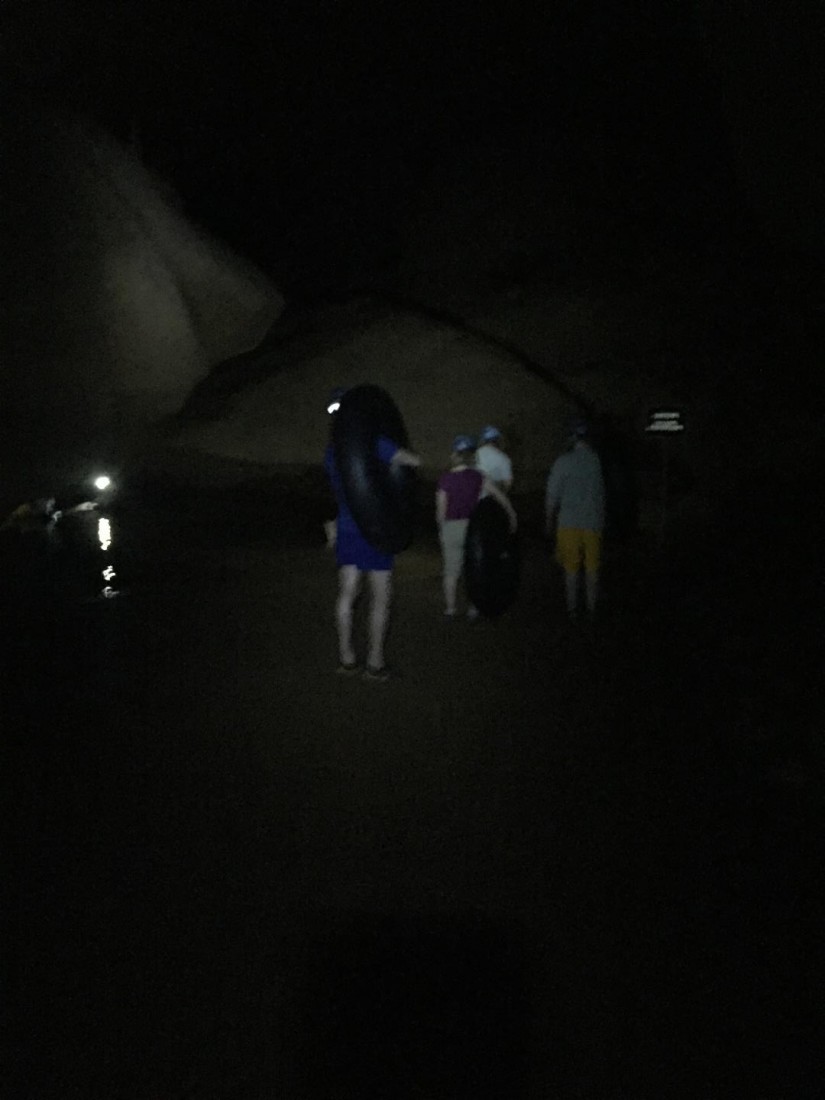 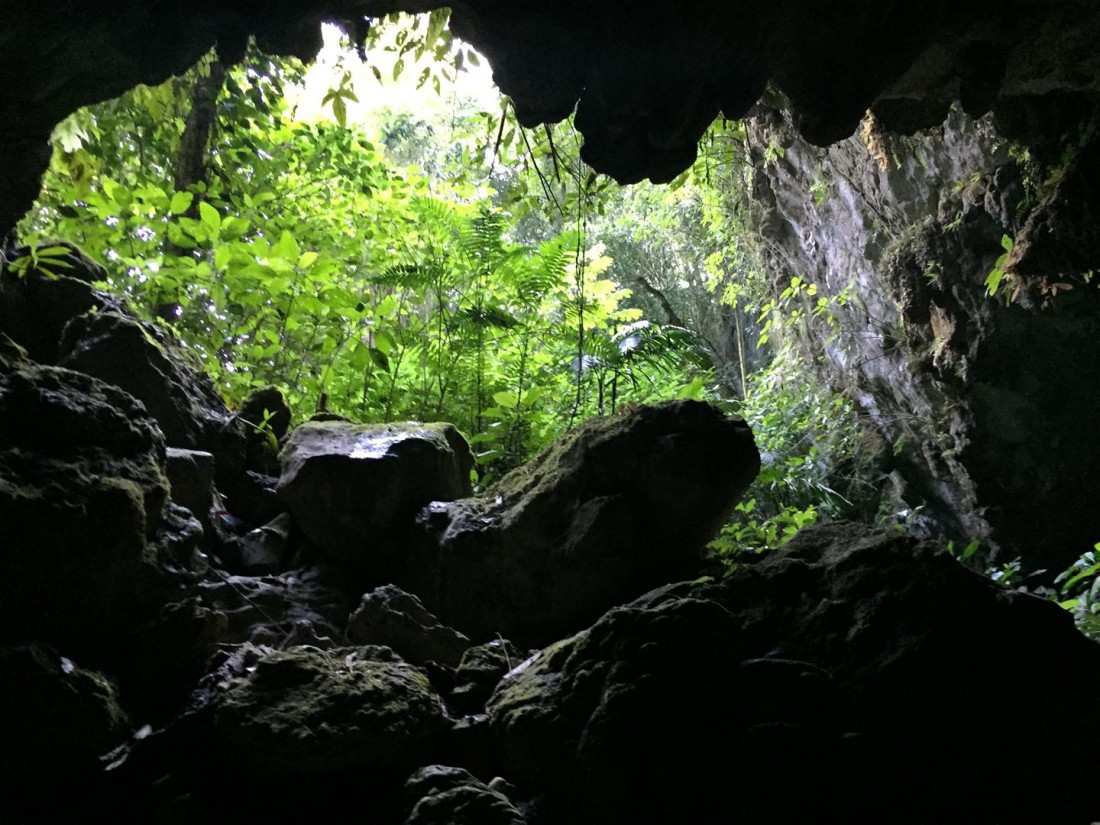 The ride back always feels shorter than the one getting there. We took a brief rest at the hostel, then decided to go on a quest for Gibnut. We got lucky real quick. The second place we stopped at had Stew Gibnut on the day’s menu. Menus here are not static. It all depends on what the restaurant owners are able to source that day. Within a few minutes of ordering, we had the Royal Rat w/ rice and beans sitting in front of us. I am pretty sure this is the first rodent I have ever eaten, and god damn it was good. Somewhere between pork and rabbit I would say. It even had a few tufts of hair sticking out of the skin on the hunk of meat. Nothing better than washing down the Royal Rat with an ice cold Belikin.

After lunch we knew the end had come and the dirt bikes had to go back to Emma. We hopped on and headed south out of Hopkins just past the resorts. The bikes needed gassed up, and the closest place was the Sittee River Marina. We ripped back the same roads that we had blasted on the first day. The big difference was today was not mud and water, but dust. The bikes were soon gassed up and off to Emma’s we went, but first I decided to hit the little bridges to see if I could get the little bike in the air. I failed miserably. I suck a dirt biking but i still have fun. Waldo managed to get through today unscathed with his 3rd bike intact.

I had a hard time taking the bike back. I wanted to keep them for the rest of the week, but seeing that we were heading to San Ignacio in the western part of the country just a few miles from the Guatemalan border, they had to go back. Waldo squared up with Emma on the damages for yesterday’s spill, then we walked back into town via the beach. The bike leg of the trip officially over, but 3 more days of adventure were ahead. More caves, ruins, Mayan burial chambers, waterfalls, cliff jumping, great food, and people… but no dirt bikes.

2 responses to “You Best Fuckin’ Belize It: Day Three”

Thursday rides are on
Curb on the Tank 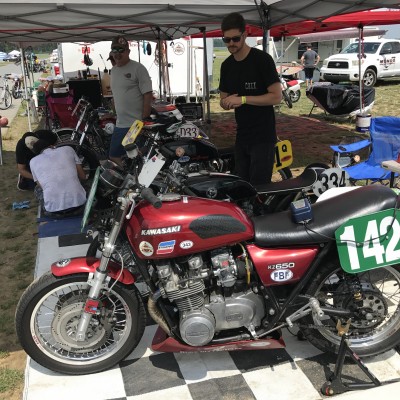