I started with a barn find KZ650 and ended up with 700cc bore race cam equipped rocket.  I kid you not…this thing hauls ass.  It’s still being broken in so I’ve been hesitant to rev it over 5k rpms but man does she go.  70+ mph at 5k rpms and pulls strong!  Redline is at 9k….shit I am in for a surprise when I get there.

Here is where I left off.  Polished the engine covers.  Two Dremels saved my life trying to get that valve cover to looks so nice. 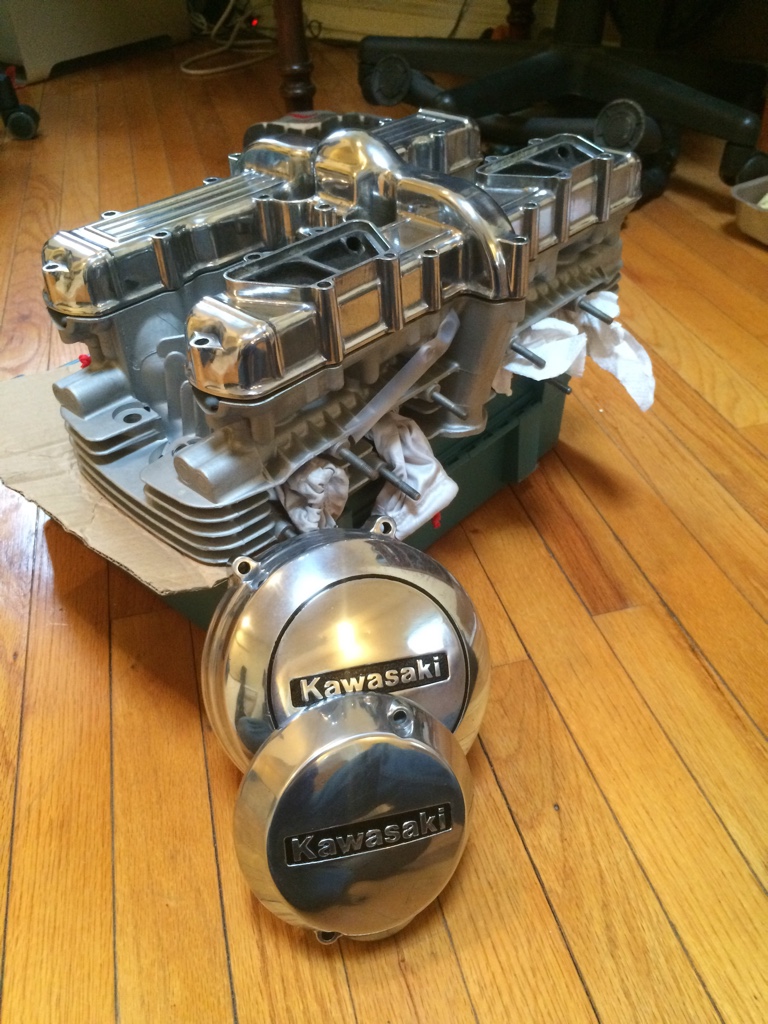 Used a K&L Motorcycle Engine Stand for the rebuild and installed new crankshaft bearings as shown covered in assembly lube.  If you look closely I nearly made a mistake during assembly.  The right most shift fork has a guide pin sticking out of it.  That pin is suppose to be recessed to meet up with the shift drum guides.  Turns out I had it reversed. 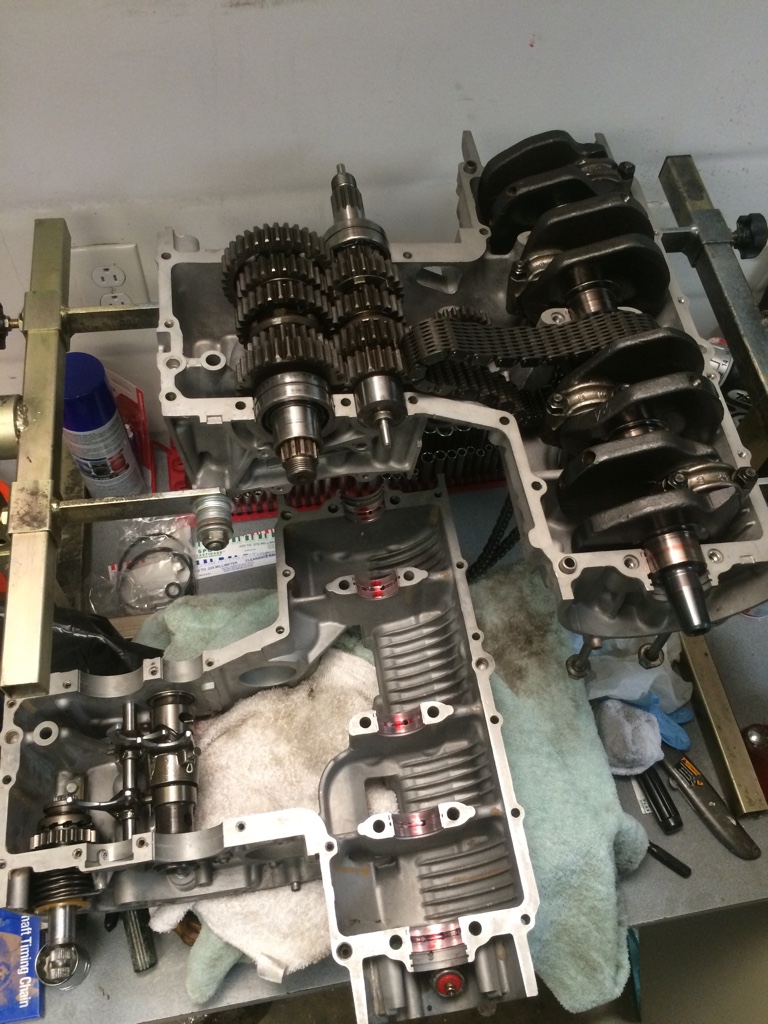 I used a little bit of carb cleaner to ensure the case halves were free of contaminates before sealing.  There is big debate about what sealant to use but Hondabond worked just fine.  The trick is to apply a thin coat.  Once the case halves are mated the the rest will squish out.  Applying too much can create major problems and potential clog important oil passages.  Red stuff is assembly lube…goes on gears and smooth bearing surfaces. 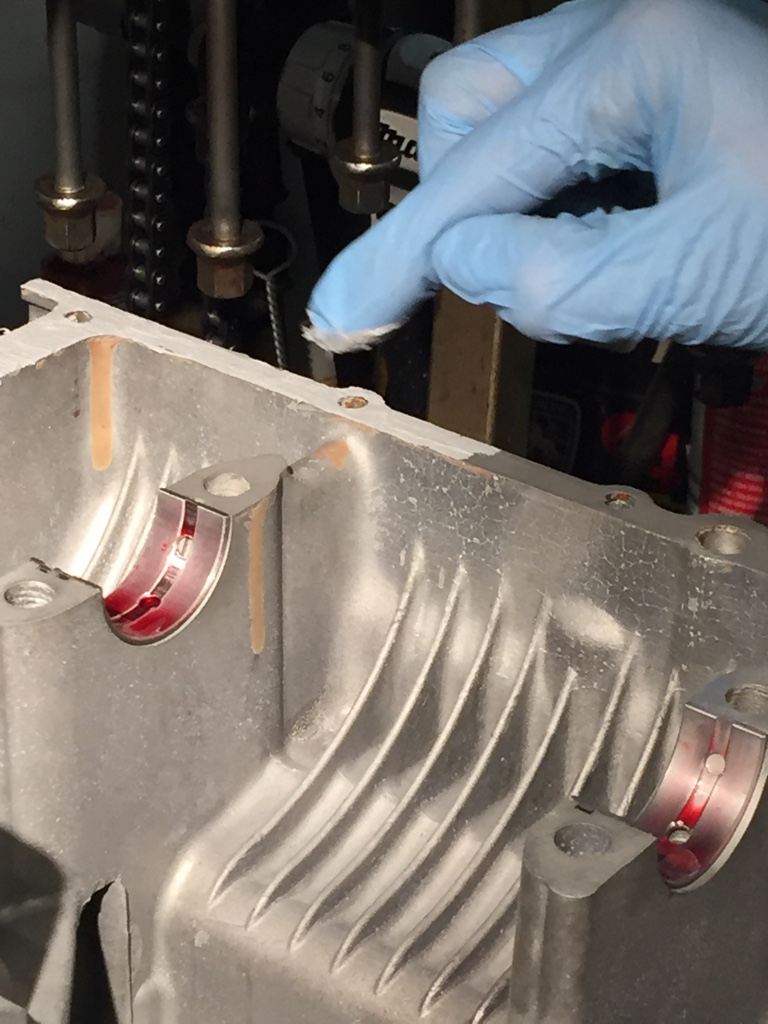 Not shown in the picture but during the case mating process the most important part was to make sure the shift forks line up to their respected gears on the other half.  A second person was critical in this setup. 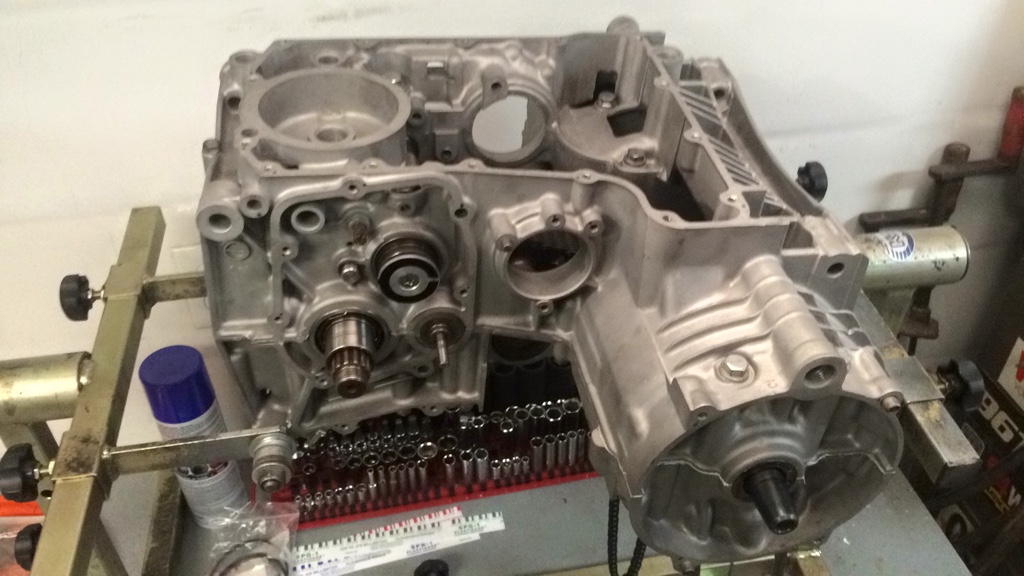 Using two pieces of cardboard I was able to create a tool that allowed me to install the Wiseco K700 Pistons (+2mm) with ease.  I’d highly recommend watching techniques on how to install circlips on the ends of the piston.  It’s to easy to damage a piston during this process if you don’t have the right technique. 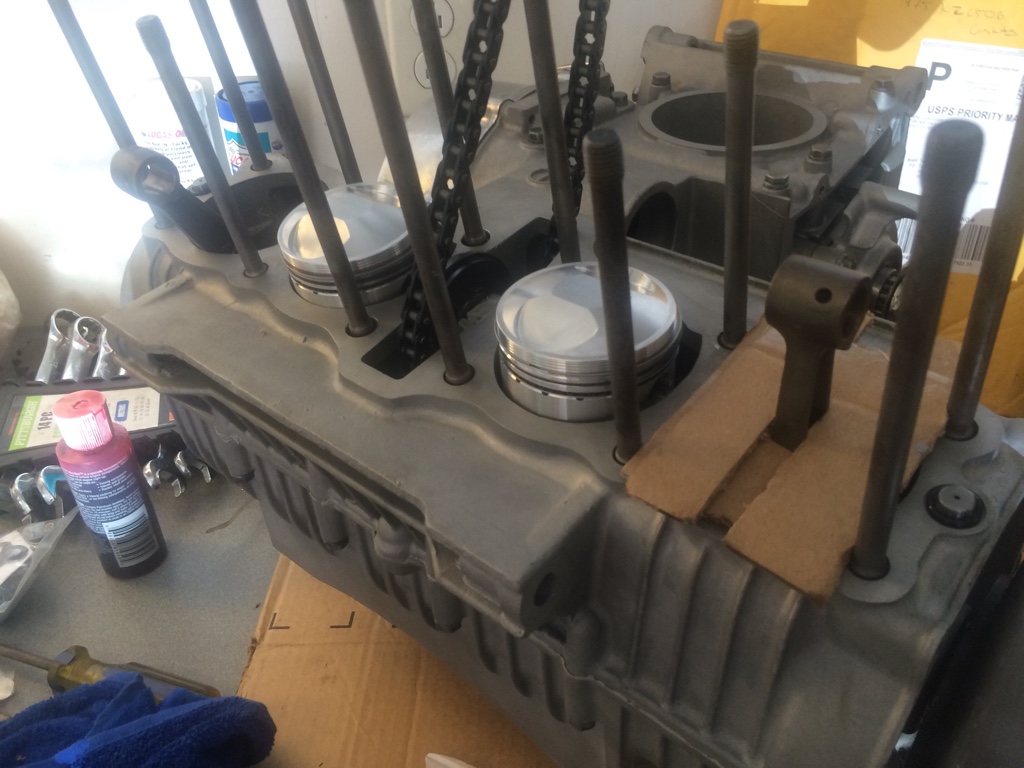 Dropping the block on to the pistons took two people as well.  A ring compressor wasn’t needed but it can be done by slowly squeezing each ring into their cylinder one by one.  Each ring gap has a specific position it needs to be facing.  This step is very important. 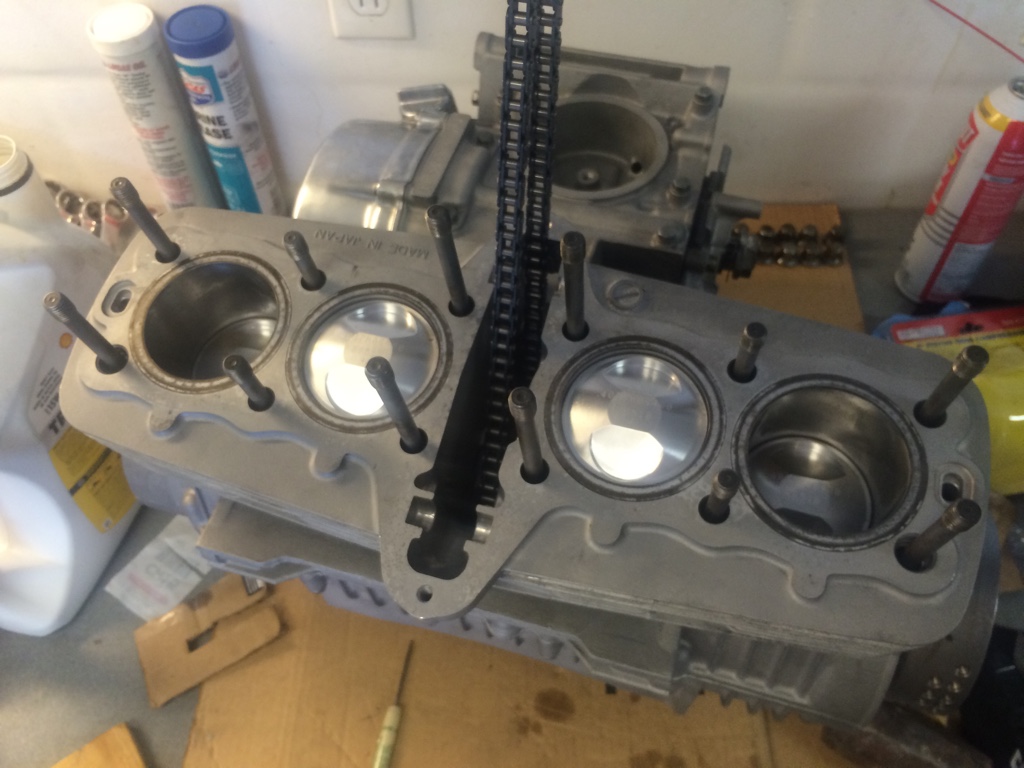 Installing the head and cams was easier than I expected.  Setting the timing on the camshafts was simple with the service manual.

WARNING:  Be careful with over tightening the bolts on the camshaft caps.  With these old bikes its a common problem for them to strip.  I had to replace 2-3 using Helicoils. 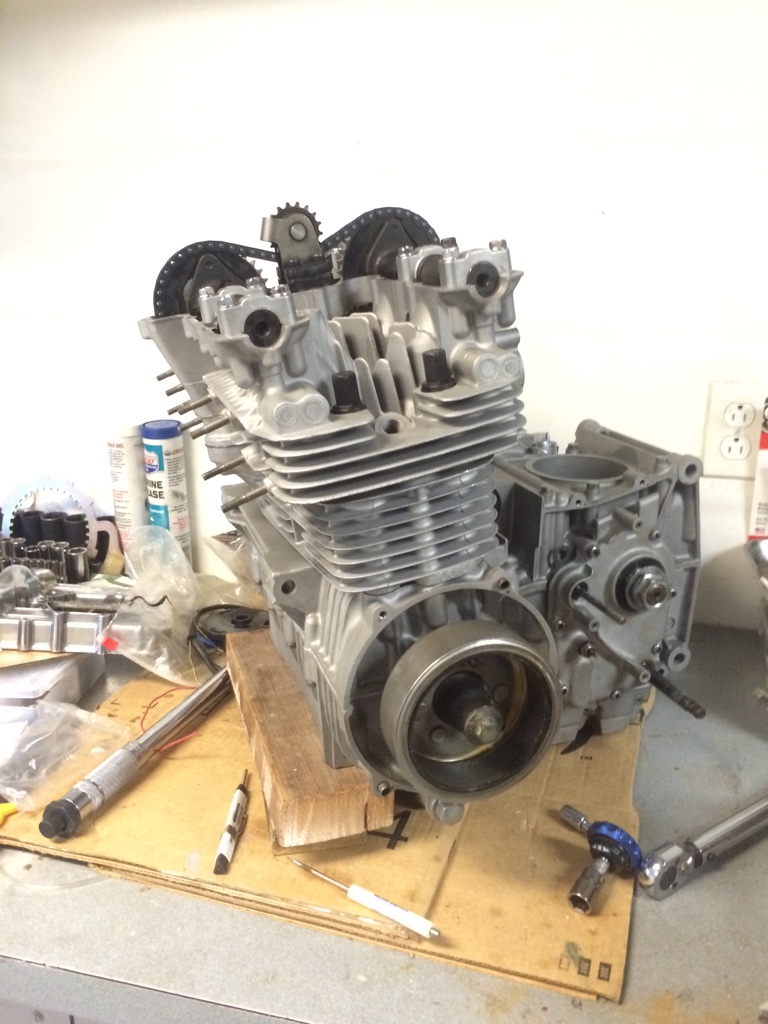 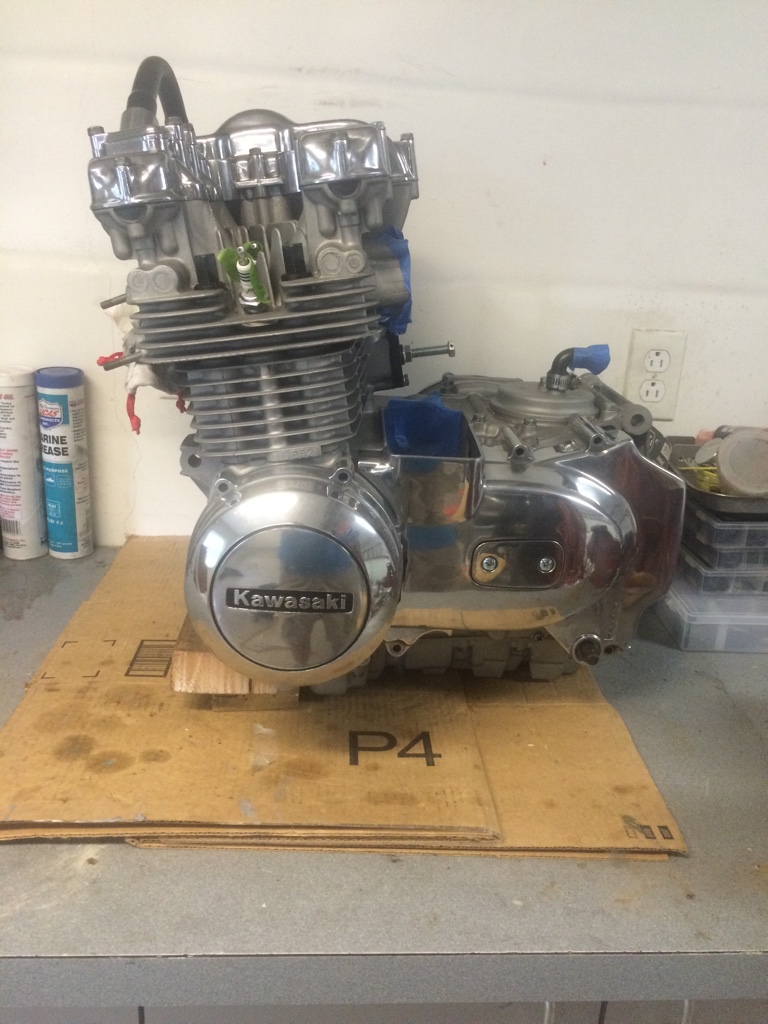 Started it up on Christmas Day and took her out for the first ride.  Bike is not quite tuned at this point.

So far I have 86 miles on her thanks to the recent warm weather.  I’ve used a Gunson Colortune to set the air/fuel adjustment and then synchronized the carbs.  Working everyday on breaking it in.  4,500 rpm limit till 500mi, 6k rpm limit till 1000mi.  Took her on quick intercity highway run to lay on the G-forces.  As I said earlier, damn this thing goes!  Got some solid praise from William Becker.  A man known for his incredible builds feature on BikeEXIF – XS650 – AERMACCHI SPRINT – NORTON COMMANDO MK III 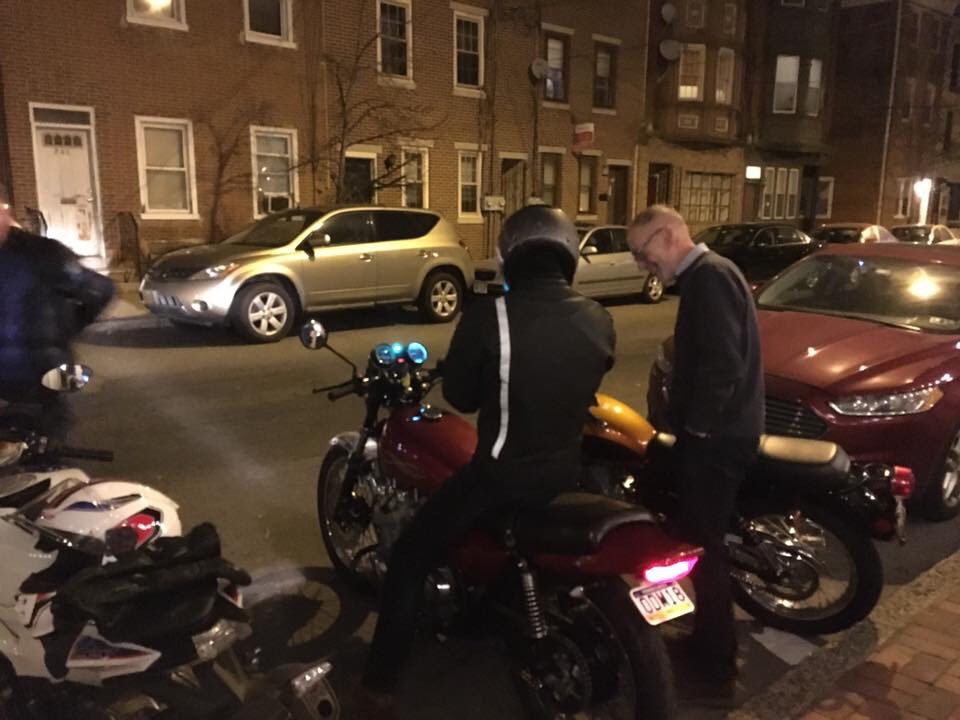 New paint job to come but for now I’ll be stopping by Thursday night Chin On The Tank ride regularly. 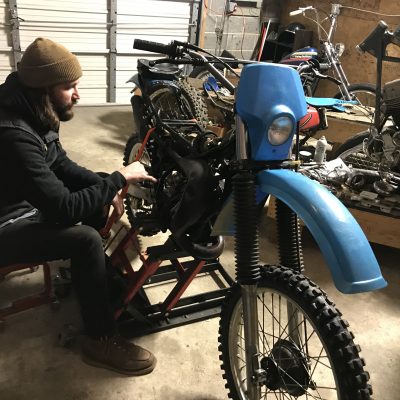