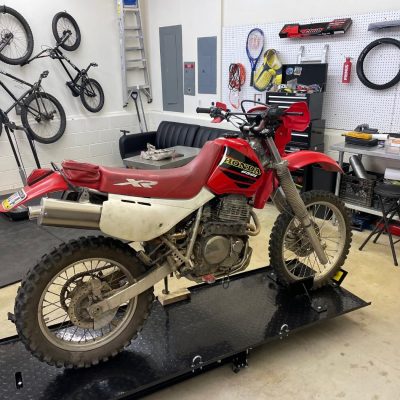 What the F is a pumper carb?

Basically when you twist the throttle, regardless of if the bike is on or off, the carb literally shoots a stream of fuel down into the engine. This shot of fuel reduces velocity-lag response (or something like that) so throttle response seems instant. A pumper carb wont necessarily make more power on its own as a carb upgrade, although some would argue the smoothbore internal design and lack of central choke plate blocking airflow is a big benefit.
Maybe 1-2 hp increase if you get the jetting dialed in.
The real benefit is zero throttle lag. It is much more snappy instant dirt-bikey brappppp feel.

After freshening up the top-end of my XR650L this winter, I decided to top it off with a “better” carb.
My engine is close to all stock internals still. The only thing I changed was I installed an XR600R JE piston which bumps compression from 8.3-1 to around 9.5-1.
And I chose better valve seals (Kibblewhite red viton).

Back to the carb

It’s def a bit different than the normal mechanical slide type carbs i’ve jetted.
Tuning the accelerator-pump (AP) is a little tricky, so i’m making this post in case I forget anything in the future.
Basically with the “AP”, you can determine when the squirt of fuel happens, the squirt direction, when it turns off, and how thick the squirt is which is all confusing.

There are a bunch of different brand and type pumper carbs. Folks on the interwebs say the Mikuni TM40 works well on an XR650L. Decided I’d give it a go. The kit was bought from Niche-Cycles for about $450, came with cables and extra jets and was “setup” for my bike already, although I ended up jetting it differently than how it came.

Normally on non-pumper, non-CV, mechanical slide carbs, like Mikuni VM’s or Keihin CR’s I’ll go a hair rich on the pilot circuit to yield better instant throttle response. On the Mikuni TM pumper you don’t want to do this since the accelerator-pump (AP) does this for you.

Upon first setting up the carb I followed the Mikuni tuning manual – link here to its spec and the bike ran like crap wtf. After a bunch of Googling it appears the Mikuni manual was centered specifically around the Harley application which is obviously different than using this carb on a single thumper dirt bike. Which… there’s a lot of usage of this carb for dirt bikes, but regardless the manual was written for Harley usage.

What screwed me up is the Mikuni manual says to have the AP engage immediately. I guess that works well on Harleys, but it doesn’t on big single thumpers.

So, how do you tune the AP?

It’s not that bad, but do it off of the bike.
Here’s what I did.
Get the base jetting pretty darn good, then focus on the AP at the end.
Take the carb off the bike. Have it all fully assembled with gas in the bowl.
Hold it upright, look into the carb as though you’re standing on the air-filter side, and turn the throttle and you’ll see fuel shoot out.
Make sure the fuel does NOT hit the slide. Adjust the one adjuster on the white nylon to ensure the fuel does not hit the slide … but DOES hit the needle dead on. Some folks say to use a popsicle stick as a feeler gauge for the AP engagement point.
Then adjust the other little adjuster screw at the top, which is an ultra small allen-key, so the AP stops at 3/4 throttle.
And put some Loctite on the 2 AP adjuster screws, because folks say they can vibrate themselves loose/tight over time which would affect the AP jetting.

I moved the throttle return spring to the softest setting. You can see in the one pic there are 3 setting notches. By default from Mikuni its set to the stiffest notch, but the softest notch felt like the oem XR carb which I liked better.
I stuck with the “carb-body” choke type. Basically you don’t need a choke with this carb. If the bike is cold and hasn’t been run in a while, just give 1, and only 1, twist of the throttle which will shoot fuel into the carb … then you can start the bike and this is kinda like choking it. Also … if you needed to use the normal choke, I’m able to reach the carb-body choke, so that still def works, but haven’t had a need to use it. I removed the oem handlebar choke and put a nut/washer in place of where it was.

I’m still dialing in the jetting but it feels pretty great so far.
Bike is running great and ripping.
When you hit the throttle the bike def jumps forward in a much more snappy way compared to the oem CV carb… so thats cool.

Below is my jetting so far

Below are pics of what the AP looks like when you turn the throttle… so you get a better idea.
So, the AP rod doesn’t get engaged at all until around 1/8 throttle … and then around 2/3 or 3/4 throttle it stops, by hitting the black allen-key. 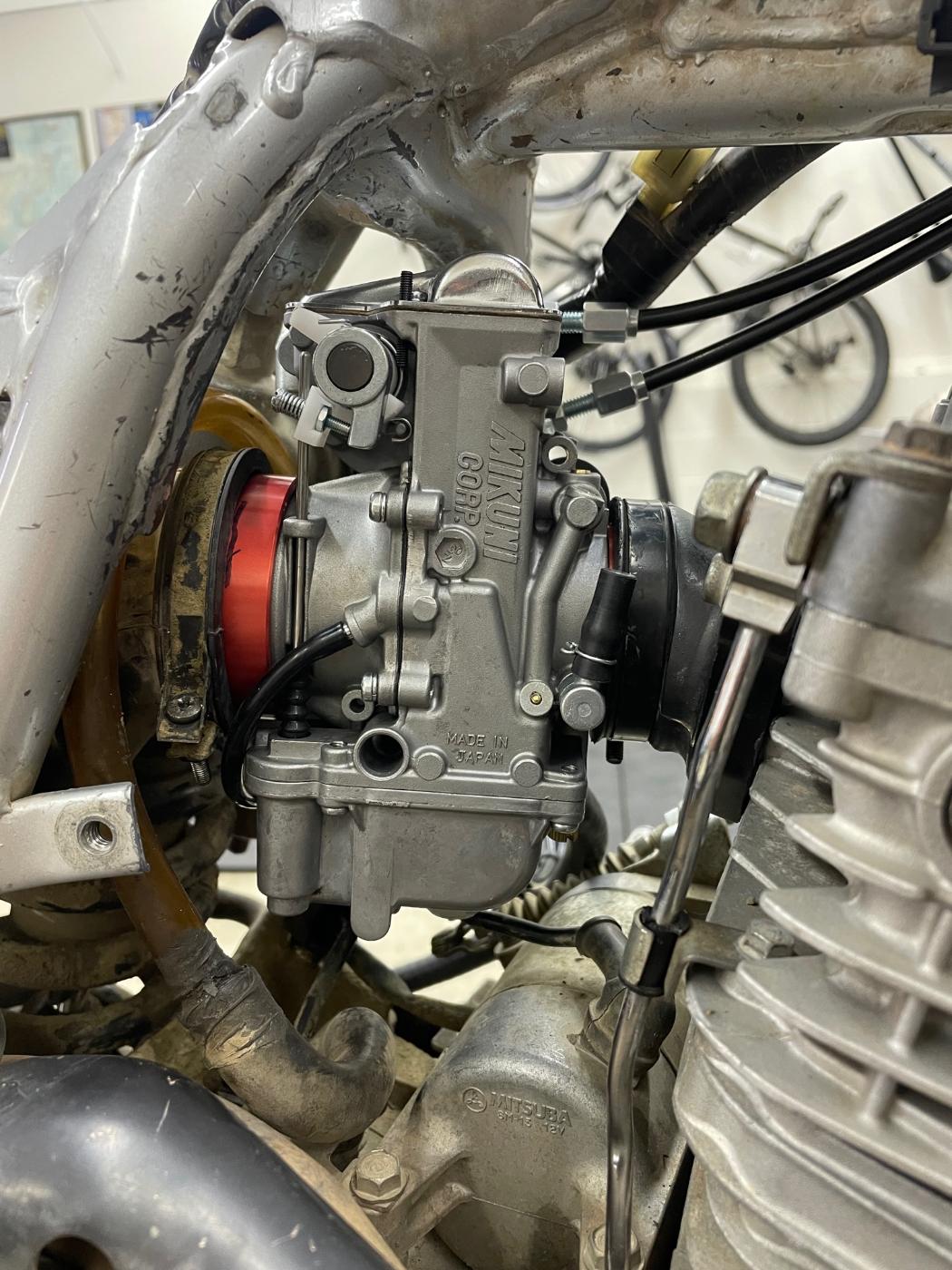 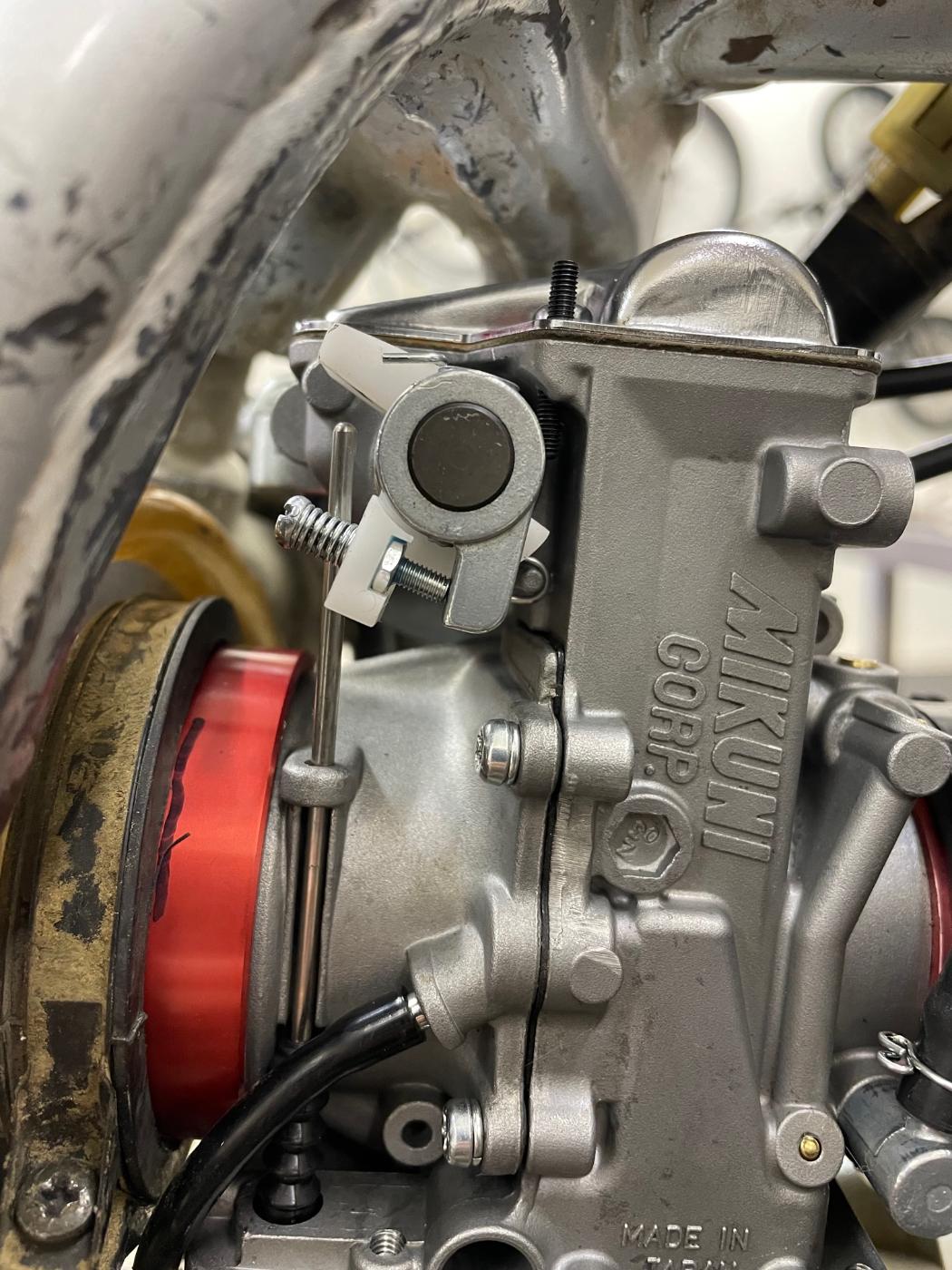 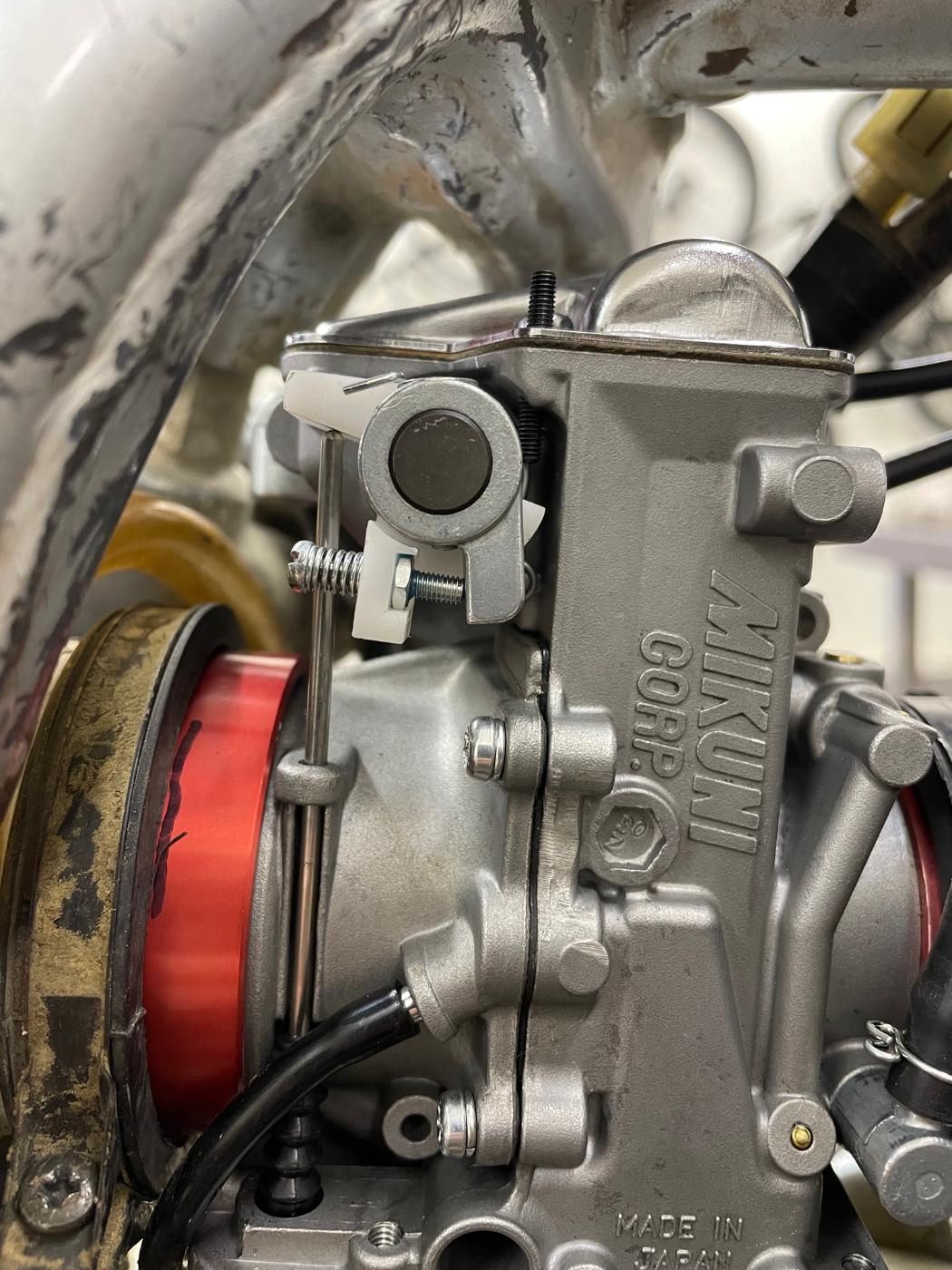 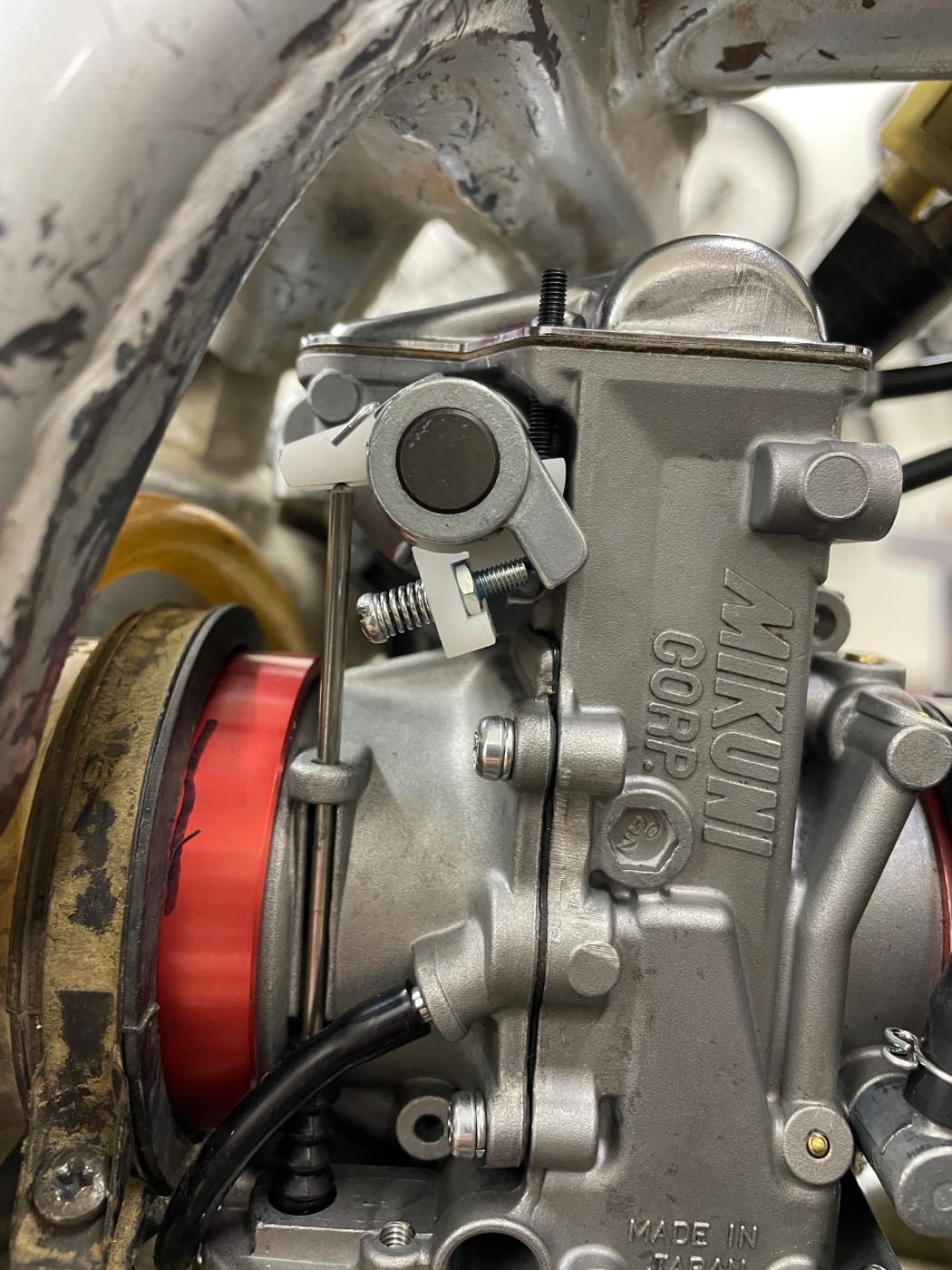 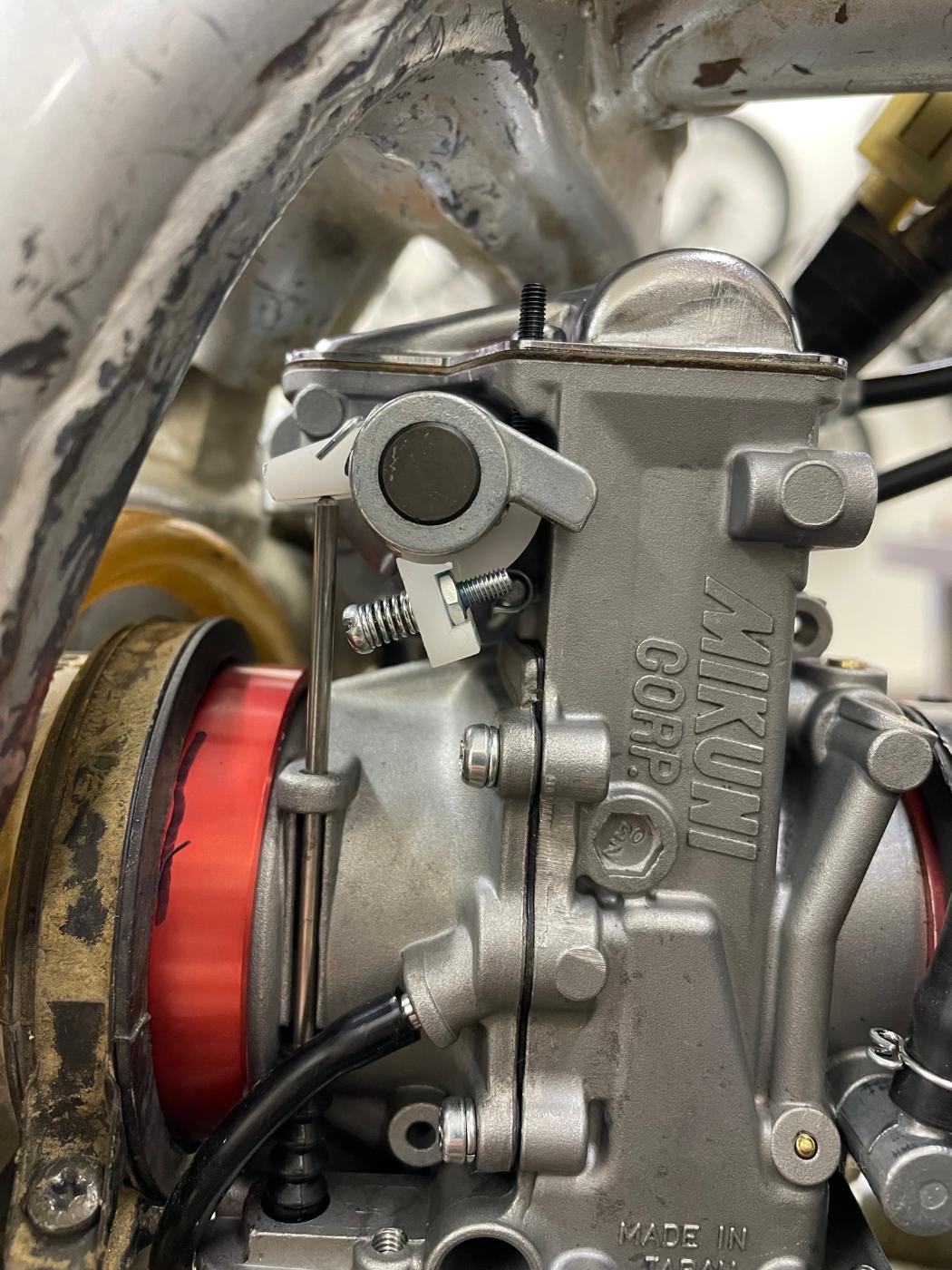 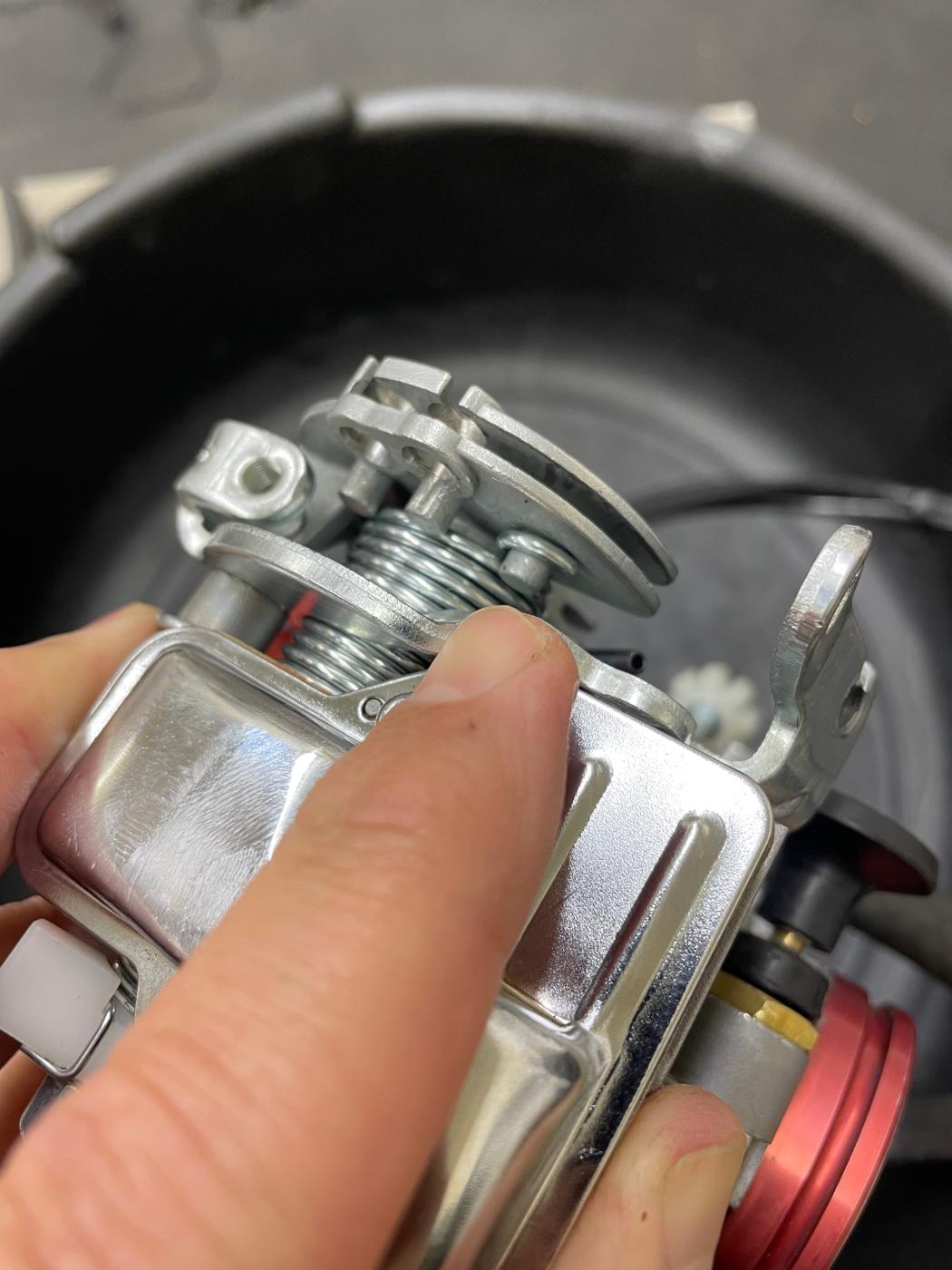 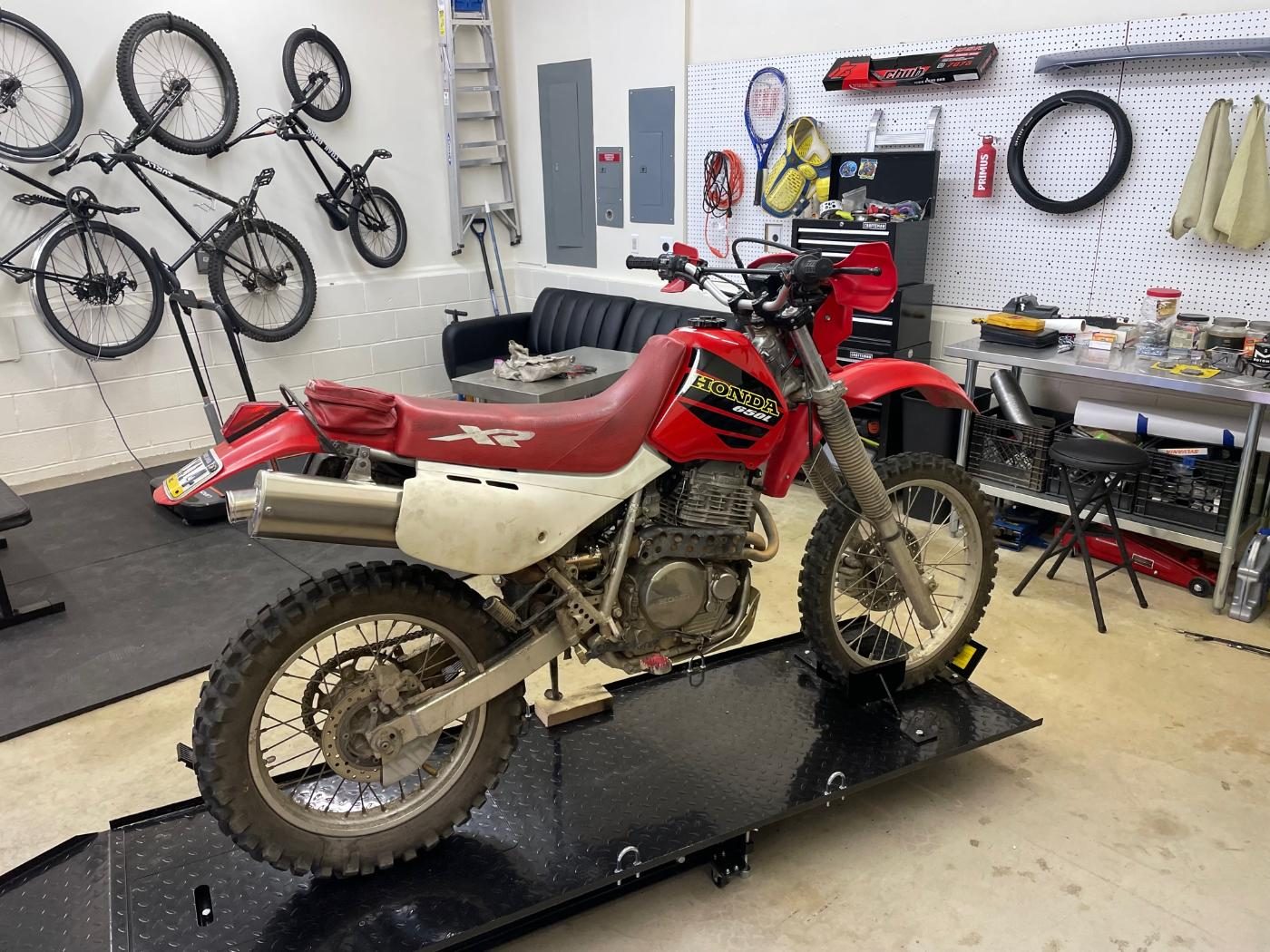 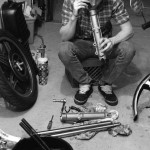 Do your forks leak oil? Mine did. This is about the same on all old 70 honda cb cycles. * For a complete, exact step-by-step tutorial, consult a real manual. I’m just gonna give the basic steps. Step 1 – Find a 17mm bolt. You have to loose the bolt on the top of the […]