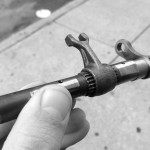 cb450 and cb500t have no valve springs.
They have a torsion bar set up.

Pic 1 –
The engines are double overhead cam which means there is a separate cam lobe for each valve. Tuners and people looking to make power like DOHC because you can fine tune the cam duration and lift for hitting each valve. It’s easier to make more power with DOHC compared to SOHC (single cam). Thats probably a general statement, but whatever. 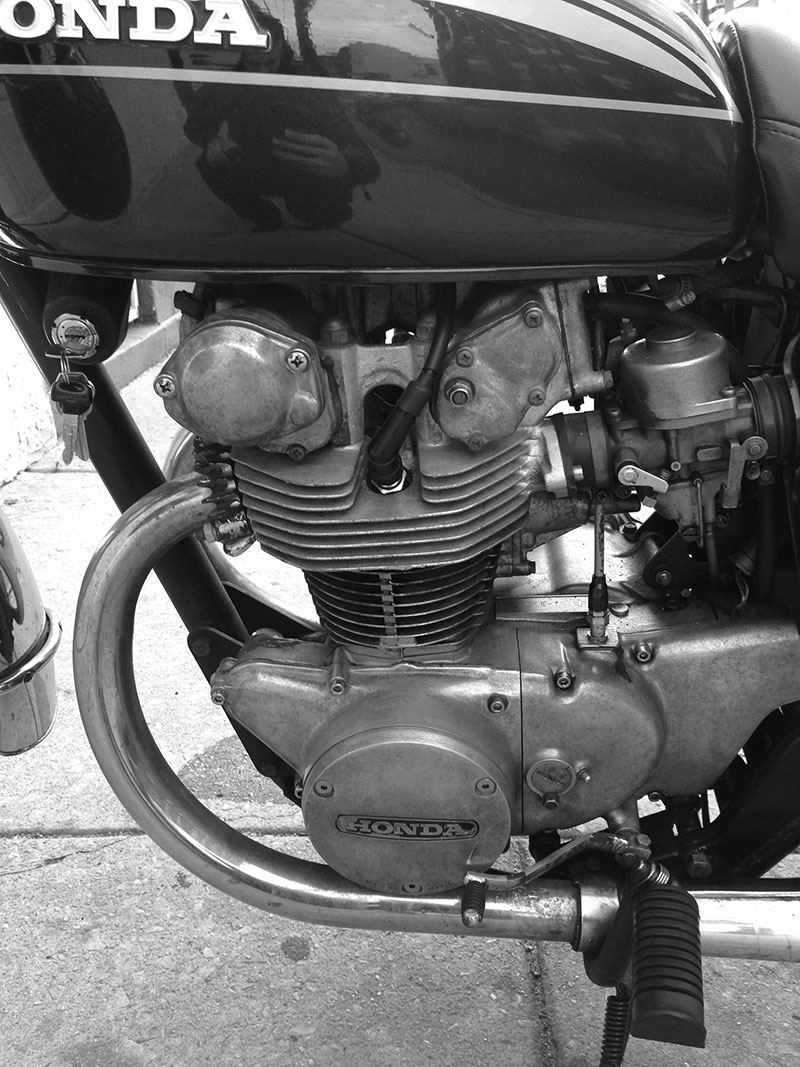 Pic 2 –
Here is the torsion bar assembly all together. Again… no springs anywhere. It took me some time to figure out exactly what’s happening. If there is no actual spring, how does the bar spring back to close the valve? 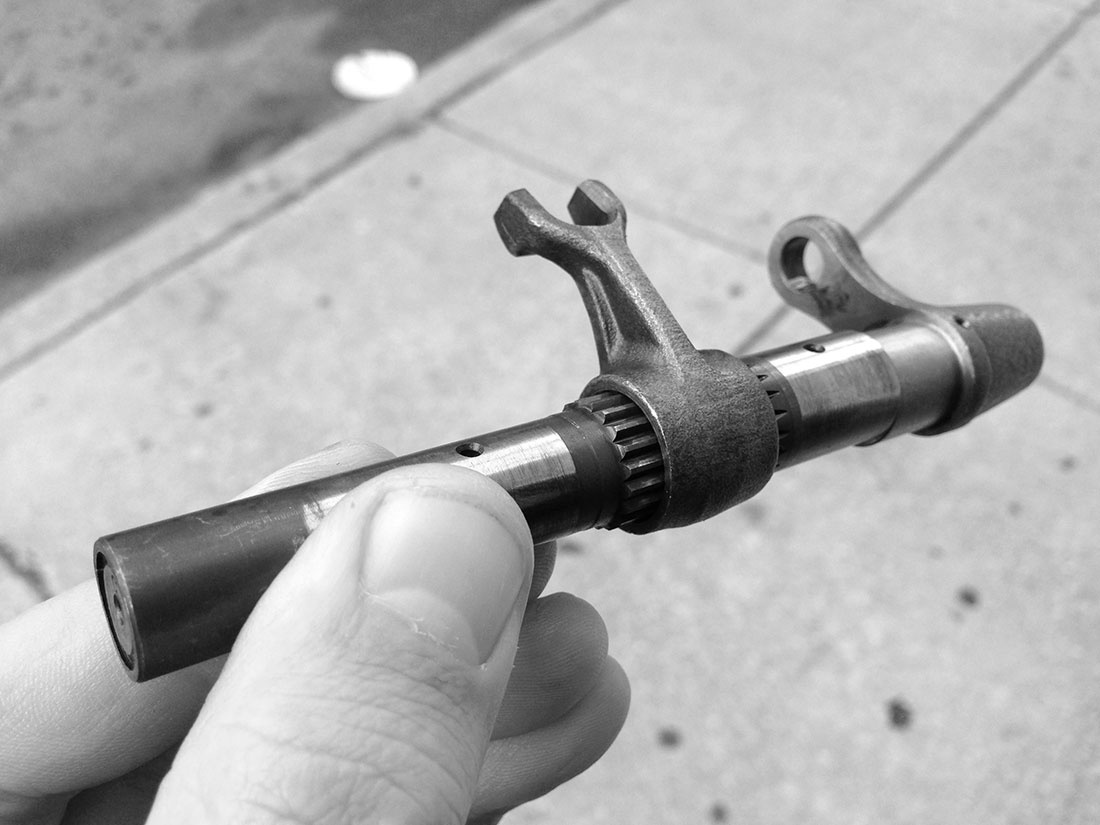 The way the bar springs back to close the valve isn’t by springing… The inner piece of metal actual twists. Yea… twists.
Pretty crazy huh. It’d be like taking a solid piece of steel and placing so much pressure on it, you twist it. ha.

The bar is fixed on the left side, and the right side, it fits onto the outer sleeve which put pressure on it when the valve opens, and literally twists that inner bar to close the valve.

And we can see in the bottom right of the pic… the claw looking thing is what’s attached to the valve, so when the valve gets hit open by the cam follower, this claw thing is what pushes back on the outer sleeve of the torsion bar, to then put pressure on the inner bar to twist itself. 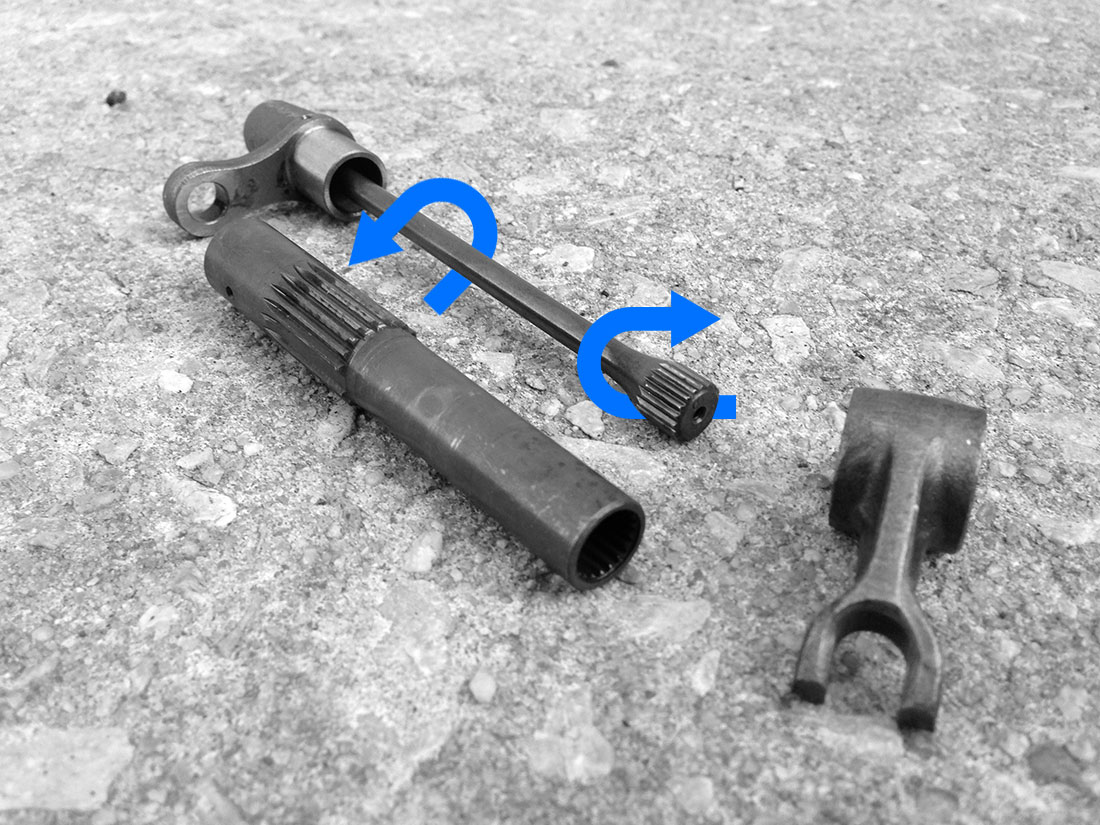 Green arrow is the camshaft. This spins and hits the Orange arrow which is the cam follower.

Orange arrow opens the valve down into the combustion chamber.

Red arrow is the claw which is ultimately attached to the torsion bar which twists itself to push the valve back in the closed position. 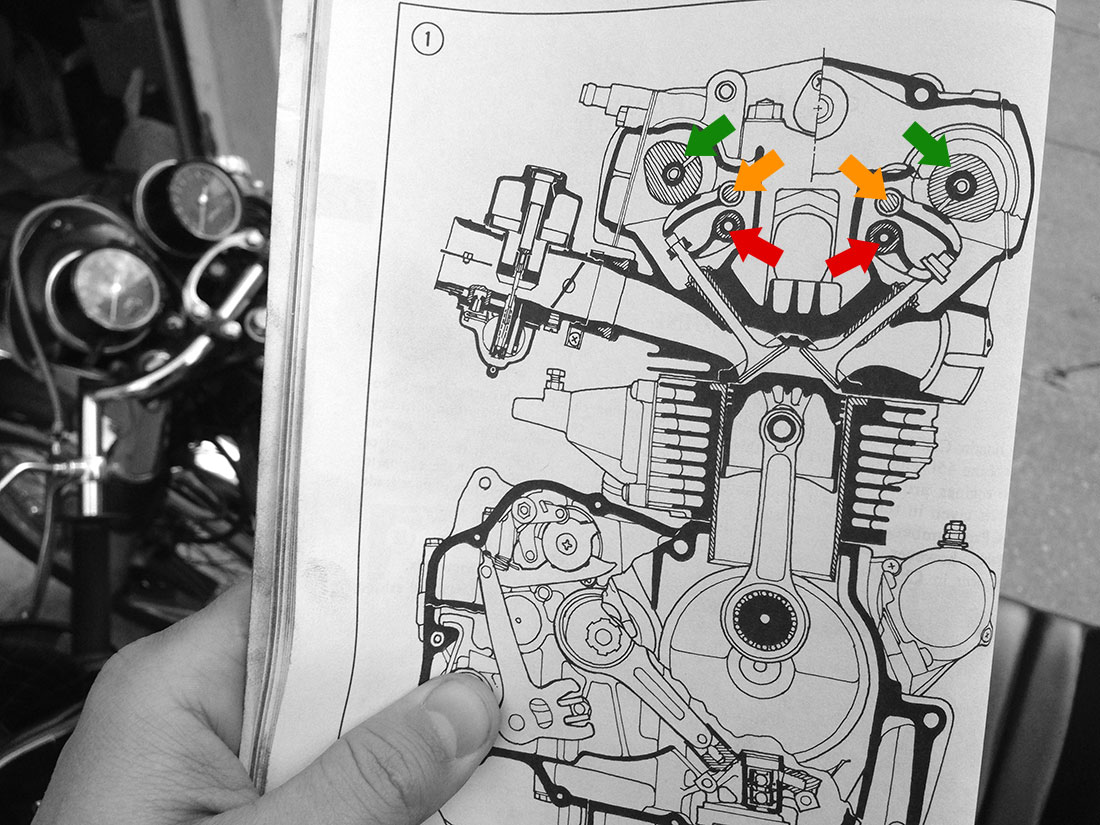 Pic 5 –
There are two torsion bars. A and B.
Apparently, over time… the torsion bars can get soft or tired and lead to valve float. I talked to a couple old school Honda cb450 race builders and they suggested a couple things.

Find NOS (new old stock) torsion bars.
Or, test mine with a inch-lb torque wrench. Apply pressure on the torsion bar to see if it’s within spec. 80in’lb is stock. Anything under 60in-lb needs to be replaced.

Apparently, it’s easy to find NOS side B torsion bars. I found 2 of them on eBay, so I’m good on that side! I can’t seem to find side A NOS, so I bought another set from a low mileage 500t, and hopefully when I test them, they’ll be close to 80in-lb tension. Or… find another set and test them.

The reason the torsion bar tension is so critical is because you don’t want to get valve float which is bad. You’ll get surging at high-rpm or burn up a valve, or possibly valve could hit a piston. Apparently the stock torsion bars are super strong and reliable, but over 40 years they need to be replaced. Stock torsion bars were used in race engines up to pretty high RPM’s. If I could find NOS for both sides I’d consider running a race cam, but for now… I’m not sure. 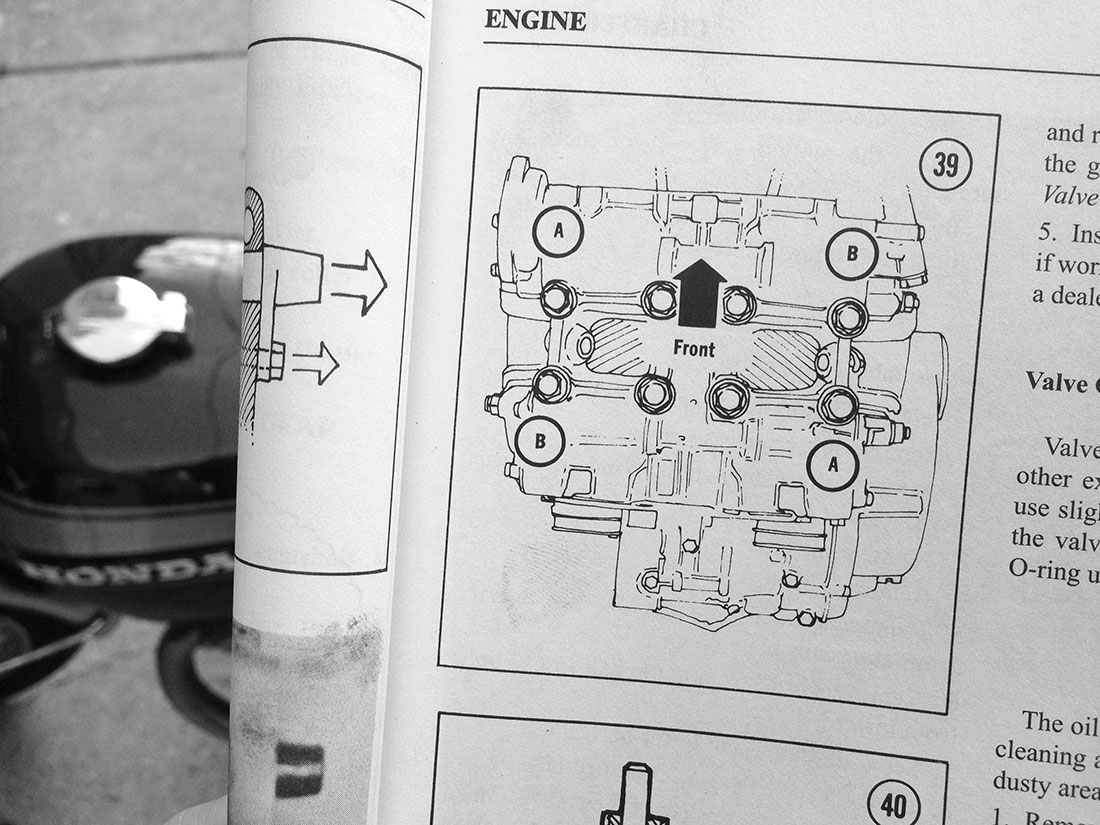 This is a damn cool engine. Dare I say one of Hondas more unique engines? The only other Honda engine that torsion bars came in would be the v12 formula f1 race engine! Which revved high as shit I’m sure. Badass!

Here is the advice the old school cb450 engine builders gave me:
– def replace valve seals
– try and find NOS torsion bars or test tension. under 60in-lb is no good
– you can bore the cylinder wall to 74mm without worry

More about boring and pistons a little bit later.

Below pic is a fully disassembled view of the torsion bar assembly.
See… no springs anywhere.
The long skinny bar actually twists to create a “spring-like” motion to open / close the valve. 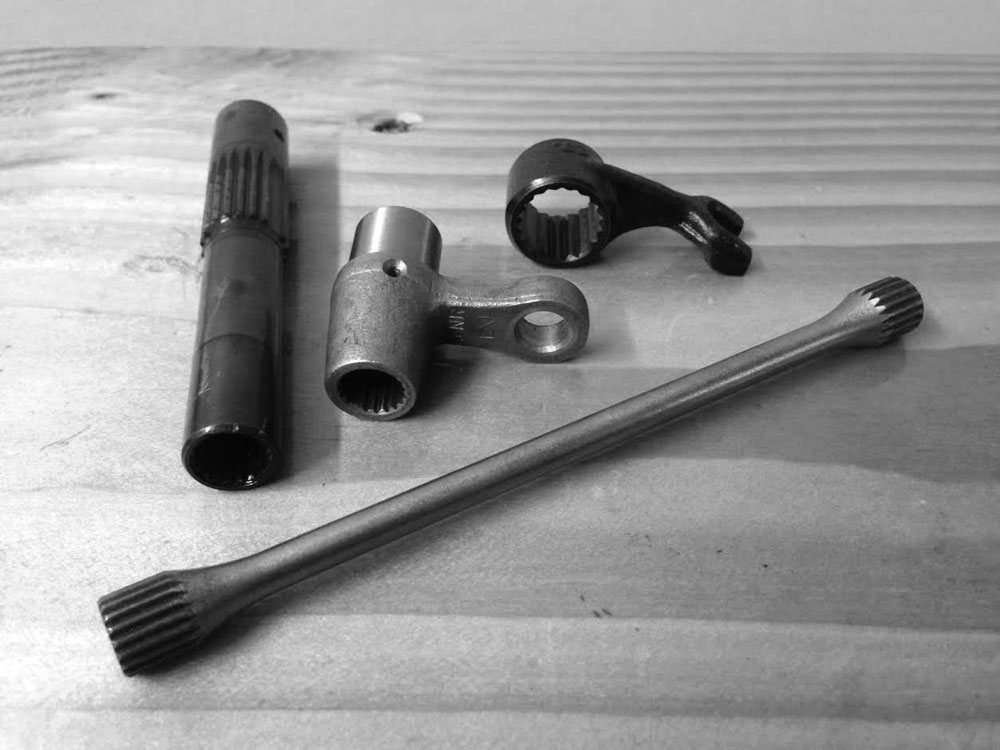 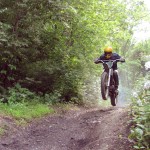 We took to the dirt this weekend, on the banks of the Schuylkill River in Berks County, to break out the Cast & Salvage 2-strokes. It was good to see us country kids and the Honda Elsinore back in their natural environment.