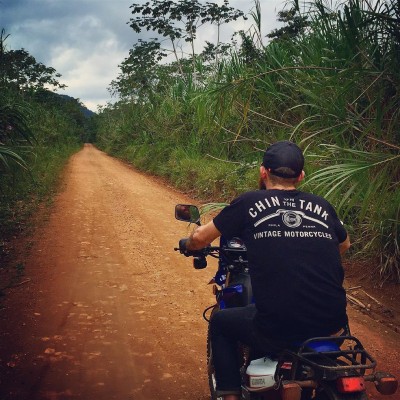 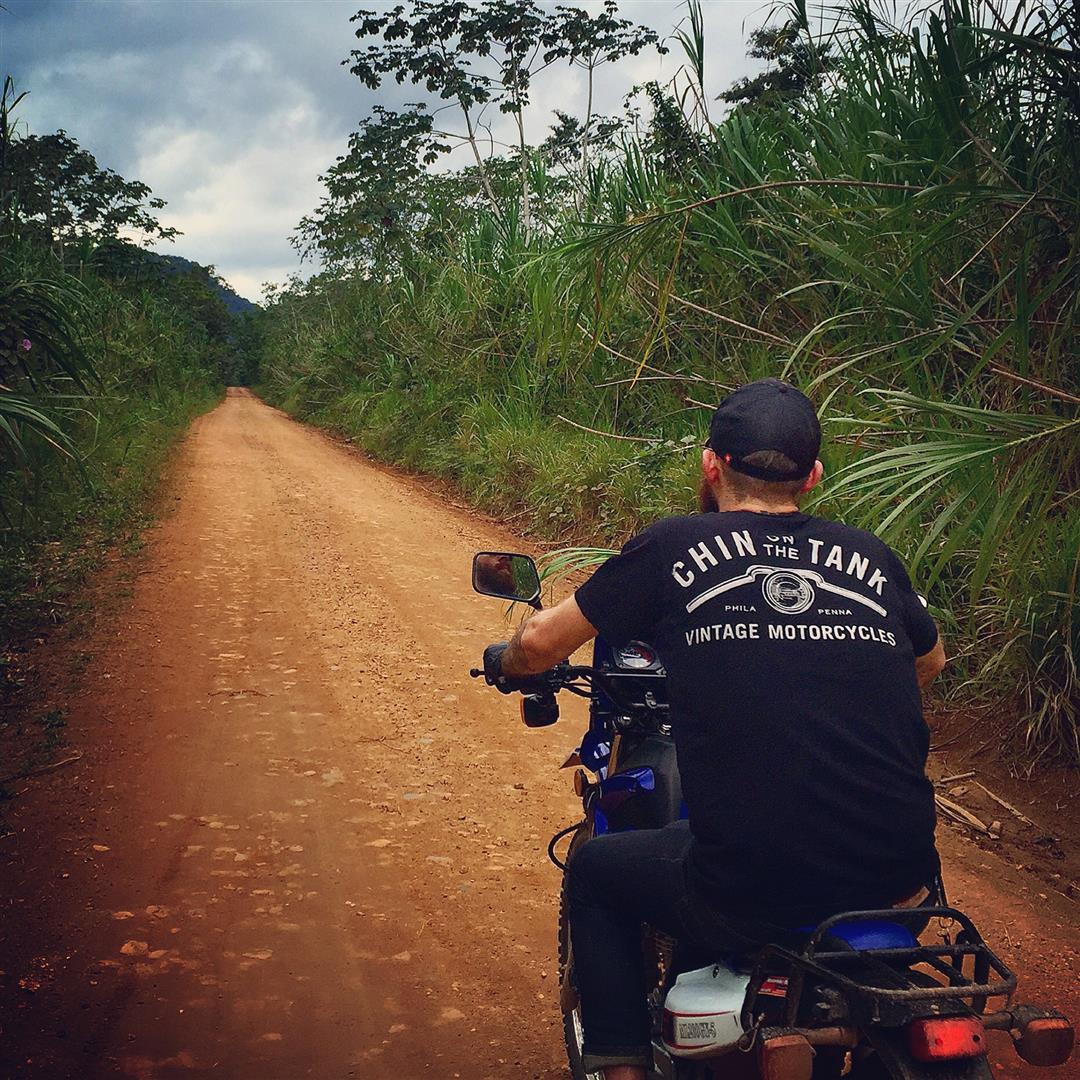 Morning comes early in the tropics. The sleepy Caribbean beach towns come alive as early as 6am. We found ourselves up by 7 shaking off the fog of too many Belikin Lagers and copious amounts of Belizean One Barrel Rum from the previous night’s local Garifuna band session. It was our first night and we went a little hard to celebrate, because the Caribbean that’s why. I was bummed to find that the first day of dirt bike ripping in paradise would be a wet one. The rain was falling in a steady, soaking mist which left for tons of puddles and mud to play in. I knew though, that rain could disappear in the blink of an eye as it tends to do down here.

Only one joint in town was open for breakfast, which was exactly what was needed to come back to life. I shoved the tasty food and terrible coffee down my throat (side note: Belizeans don’t do coffee. Which is strange considering their next door neighbor is Guatemala. Picture coffee flavored hot water, a la airline coffee). The anticipation of getting the bikes and ripping up the Stann Creek District was getting to me. As soon as we paid the bill, we headed across the street to Alternate Adventures and met the proprietor, Emma. After going over all the normal procedures when renting bikes, selecting helmets, and paying for the 3 days; we had in our possessions 2 cheap ass Chinese 4 stroke 200cc Meilun ML200GY-5’s. Meilun bikes seemed to be the Belizean bike of choice. I saw only 5 other bikes the whole time here that were not Meilun’s which is crazy because Belizeans are bike people. Motorcycles were everywhere. I suggested to Waldo we head to the end of town and ride back just to get a feel for the bikes. That little ride turned into a 2 hour rip…couldn’t help it. Once you  get going, it’s not easy to stop. 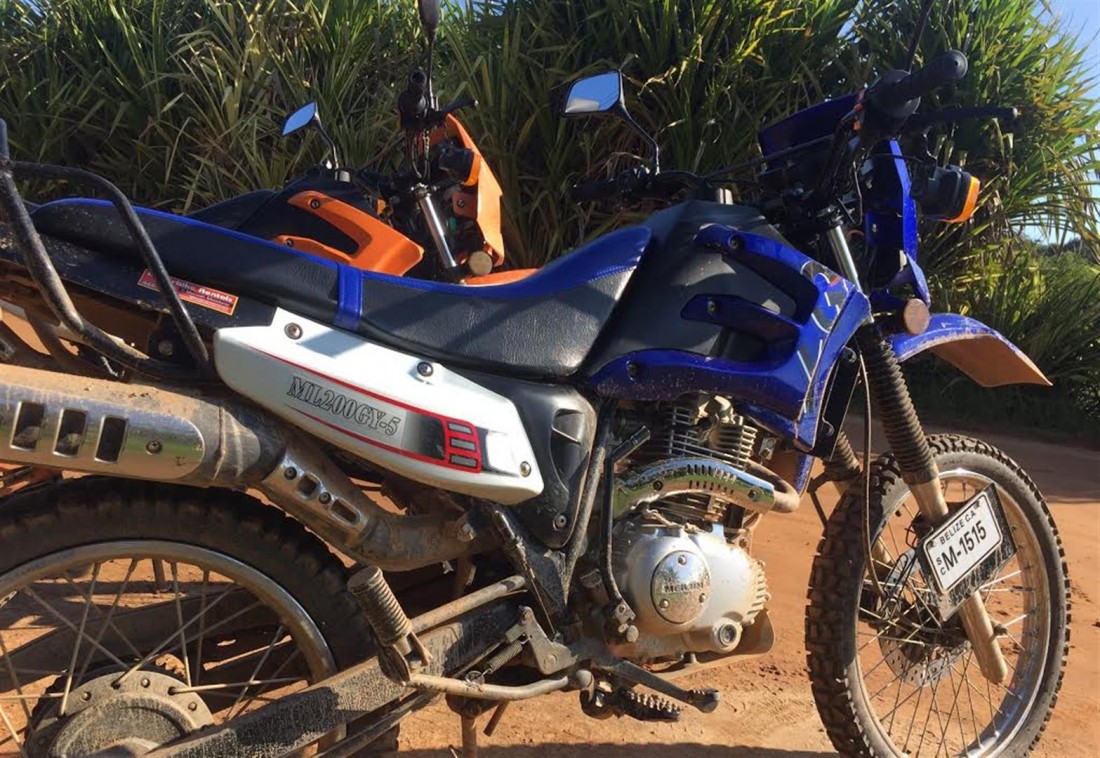 We headed south out of Hopkins and rode through all of the resorts. The roads were insanely muddy and were pitted the entire width with deep water holes;the ones you cannot resist or avoid going through…the fun shit. We rode until there was no more road. A quick check on the map and we were off towards the next village: Sittee River. We soon discovered tiny little bridges that were used to cross small patches of the coastal wetland. These bridges were the perfect table top jumps. I tried my best a few times to get the Meilun airborne, but was not having luck. I’ll be honest, I suck at dirt bikes but still love it. Going inland we soon diverted from the road and found a farm access road that intersected through cow pastures and woods. We discovered some sort of quarry at the end of the road and explored it for only a second. The access road soon hit the main road leading back to Hopkins. At this point the rain was letting up and our hunger growing, so back to town to regroup and figure out our next move. 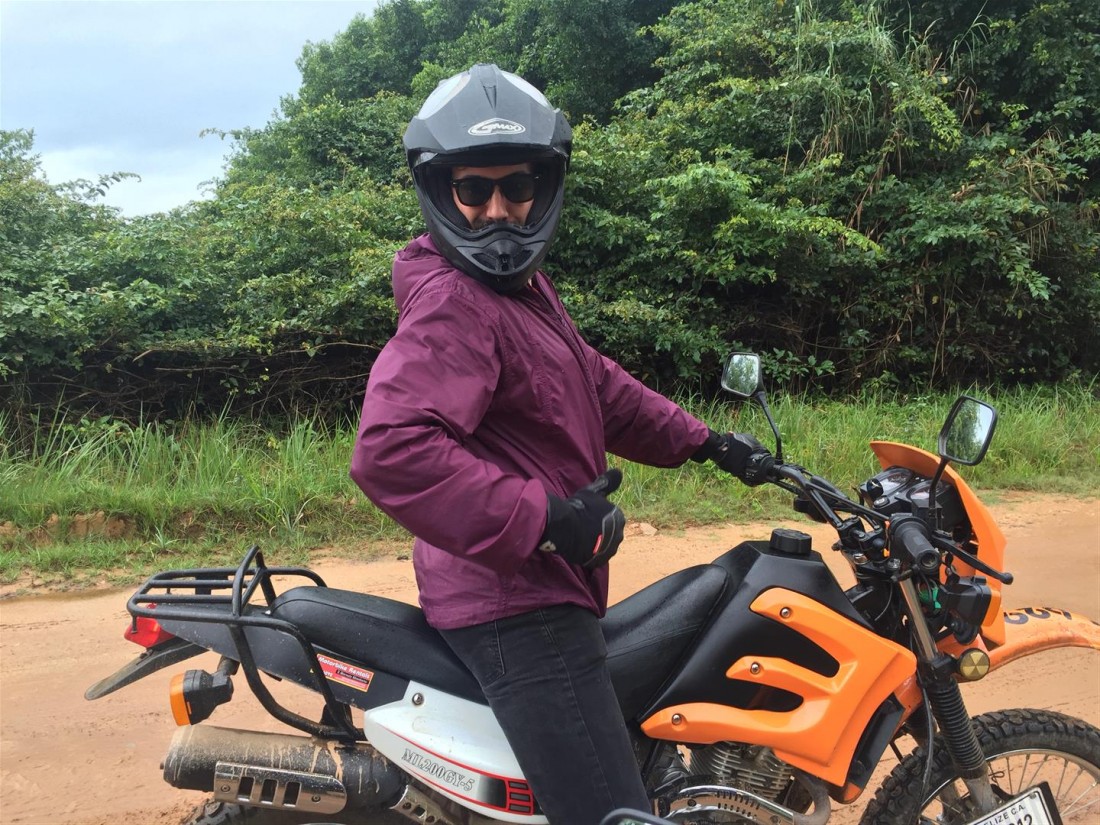 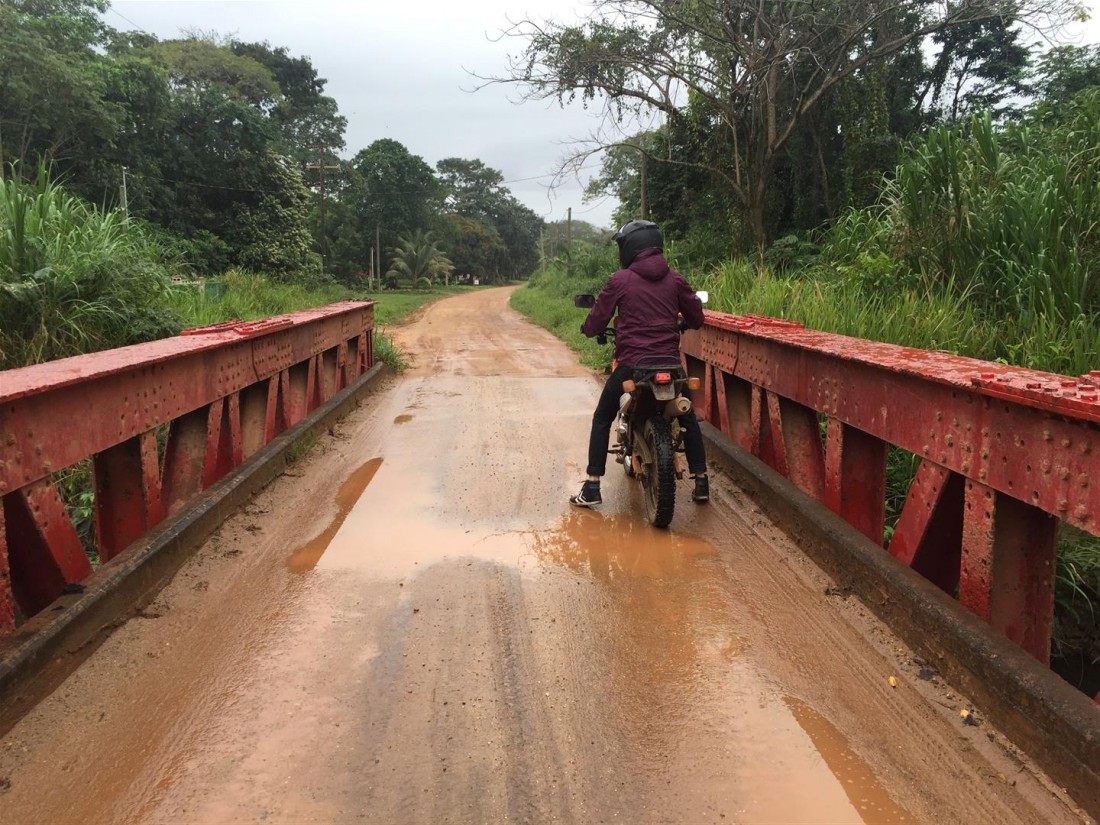 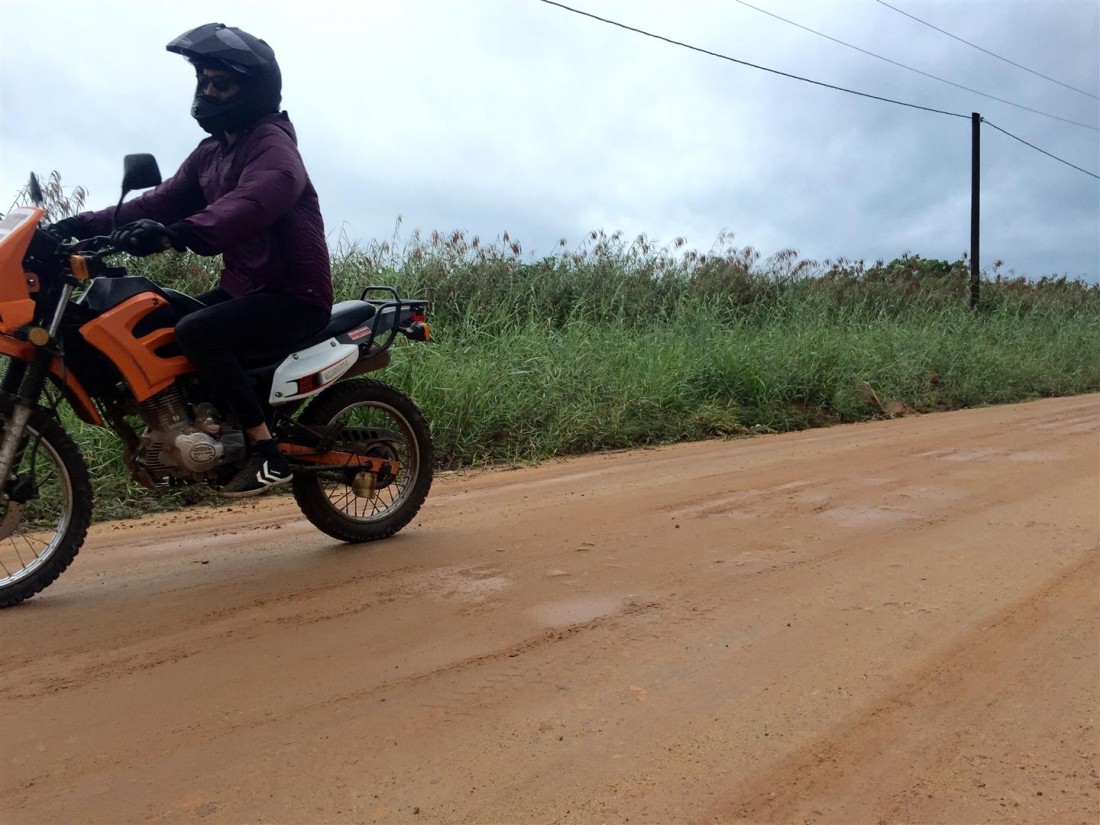 Lunch was stew chicken w/ rice and beans washed down with a cold Belikin. I made the executive decision to rip to the Cockscomb Basin Wildlife Sanctuary to do the Tiger Fern Falls hike. The rain was gone but the clouds remained leaving for a chilly ride. We headed out of town down Hopkins road. 4 miles ahead was the Southern Highway. Belize has 4 highways (Phillip Goldson, George Prince, Hummingbird, and Southern Highways). I use the term highway loosely, because we would consider it a back road at best, but they are paved so that seperates them from 99% of all the other roads we encountered. There is a speed limit of 55mph, but the road is more like a 3rd world version of the Autobahn. No rules save for don’t get hit. The really cool thing was, as you come into populated areas, there are speed bumps to slow you down but these are no normal american style humps. They are very small table tops themselves. In a car you need to come to a crawl to cross these barriers to save your axle and suspension from being destroyed, but on a tiny 200cc dirt bike it’s an excuse to rev up and pop these things… shooting to be airborne. Should we have slowed down coming into towns? Sure, but that wouldn’t have been fun to miss the opportunity of hitting these mini bump jumps. The highways are littered with these things, so for the next 3 days we will have plenty of time to hit them.  10 miles south of Hopkins Road we turned right at Maya Center and headed west down the road towards Cockscomb. While it was all dirt, this was a very wide road that ran through jungle and orange groves. Eventually the road forked and got real interesting. A true jungle dirt road that had plenty of climbs and twists. At one point a family of Coatimundi’s crossed our path. At first I thought they were lemurs, but I found out a few days later what they actually were… turns out they are more related to the raccoon. The road wound on for miles, up and down, climbing the foothills of the Maya Mountains. Soon enough we arrived in the Cockscomb visitors center, paid our entrance fee, left our gear at the ranger station, and embarked on our hike to Tiger Fern Falls. 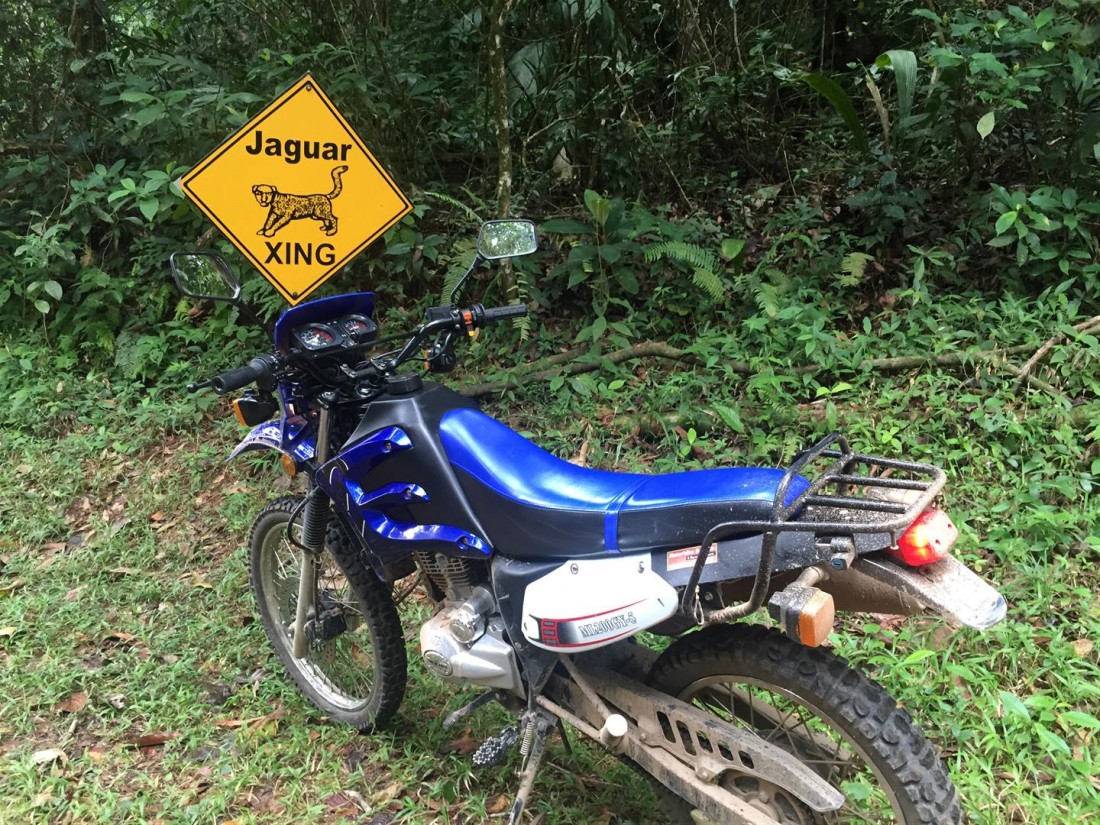 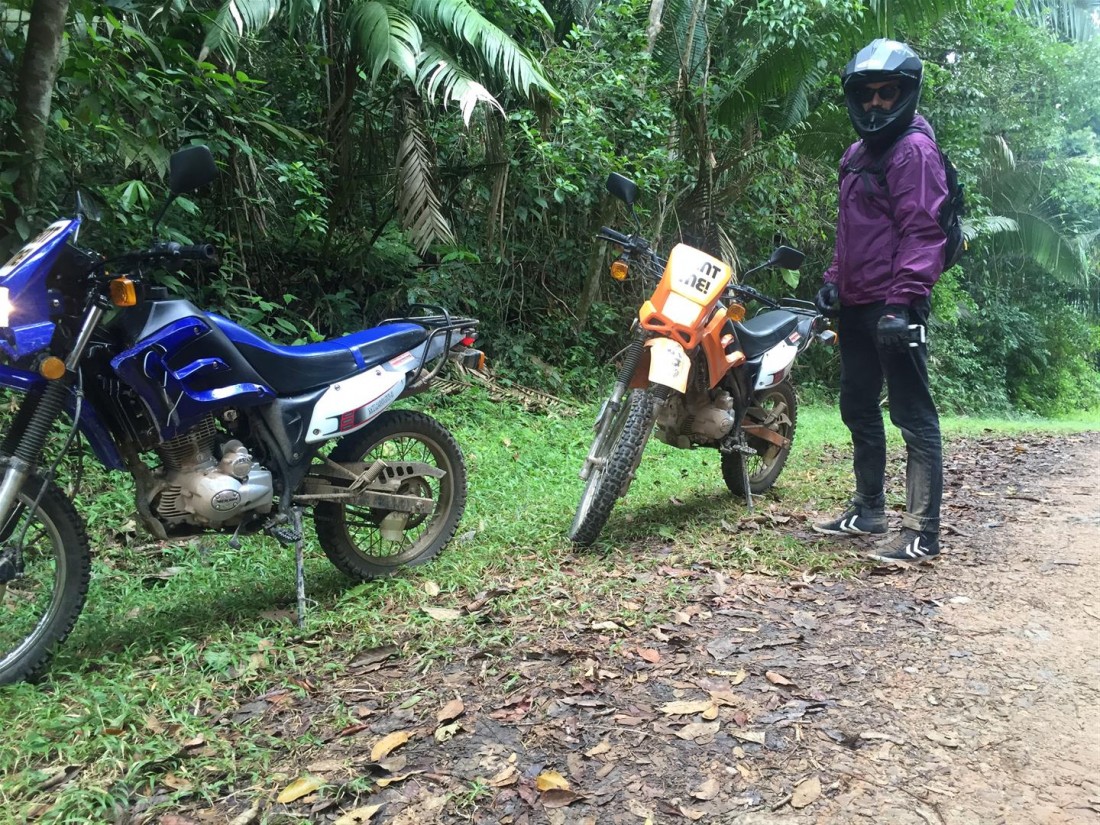 The hike was easy at first, working its way through the jungle. Everything down here is humongous with prehistoric vibes. If a raptor were to leap out and disembowel one of us, I would not have been that surprised. Soon though, the hike became grueling as we climbed up one ridge of the Mayan Mountains then down another. The rain fell again, soaking us, but staying dry in the tropics is always a challenge. One hour later we were at our destination. Two large waterfalls of the most saphire blue water w/ pools for swimming were directly ahead. We promptly jumped into the chilling water and swam around; nothing like a shower in a fresh water waterfall. Feeling fully refreshed, we did the hike back which was a lot easier than the hike in, as most of it was down the side of the mountain. 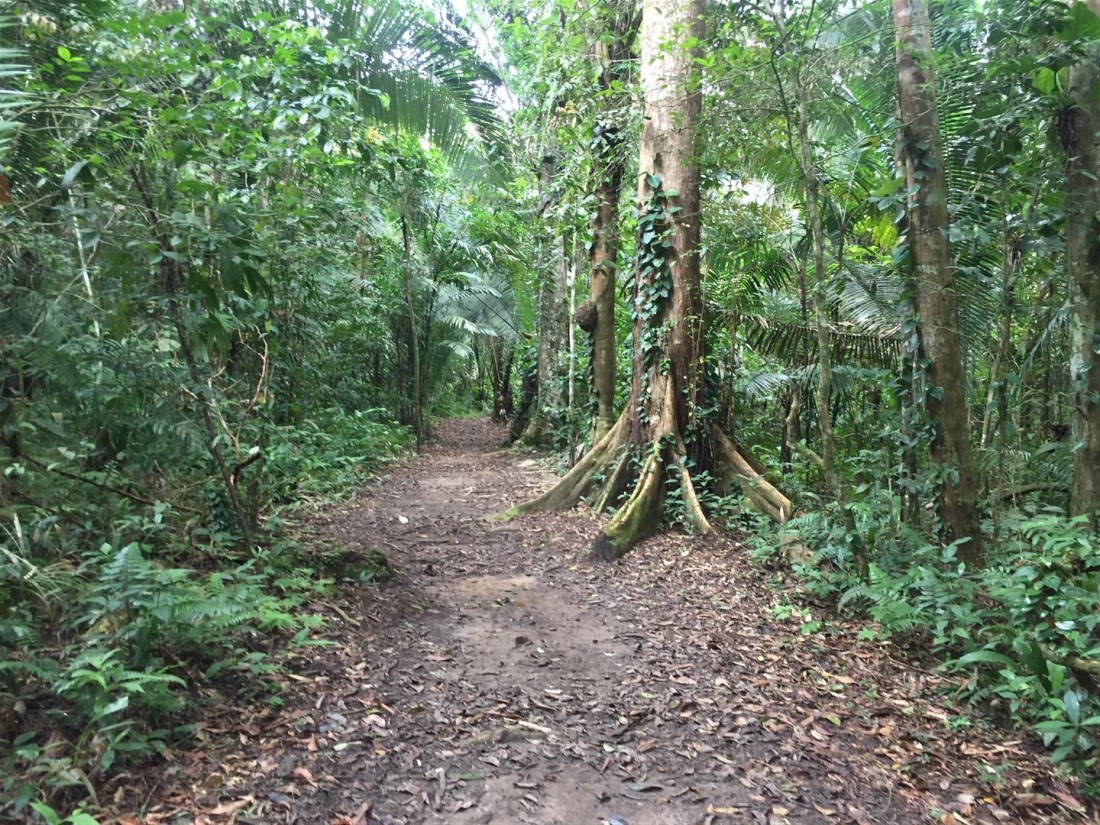 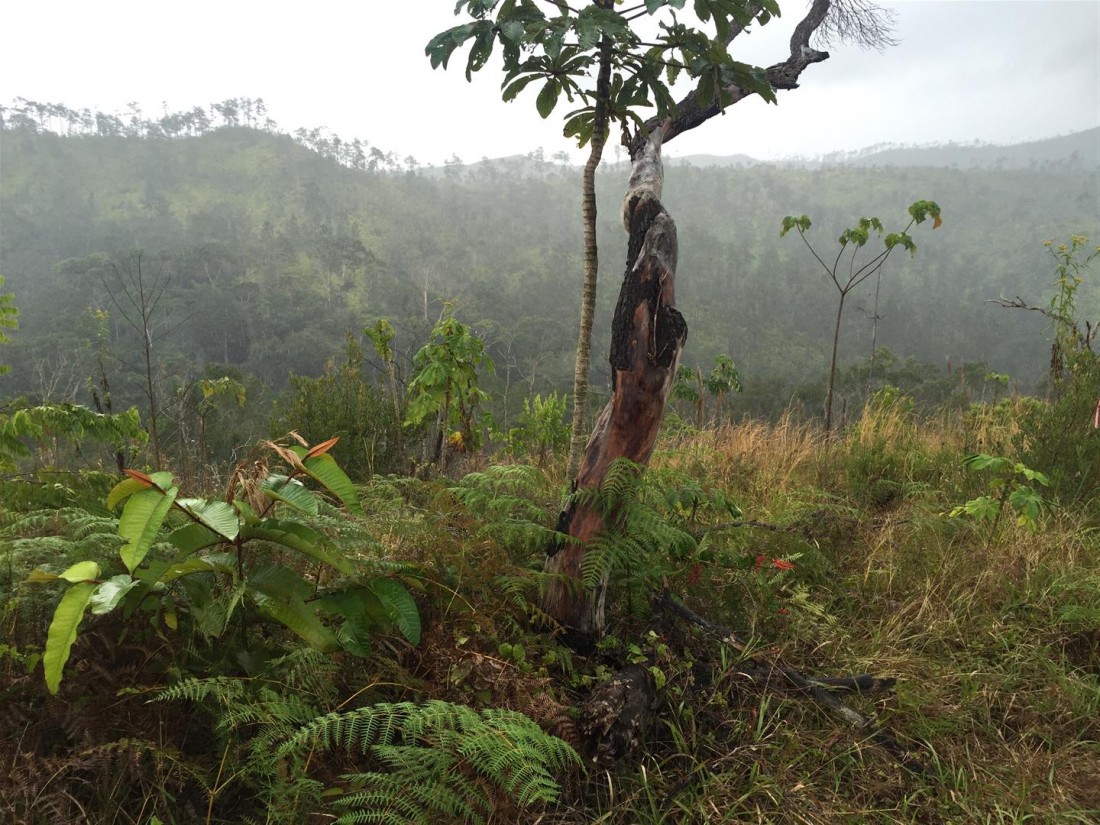 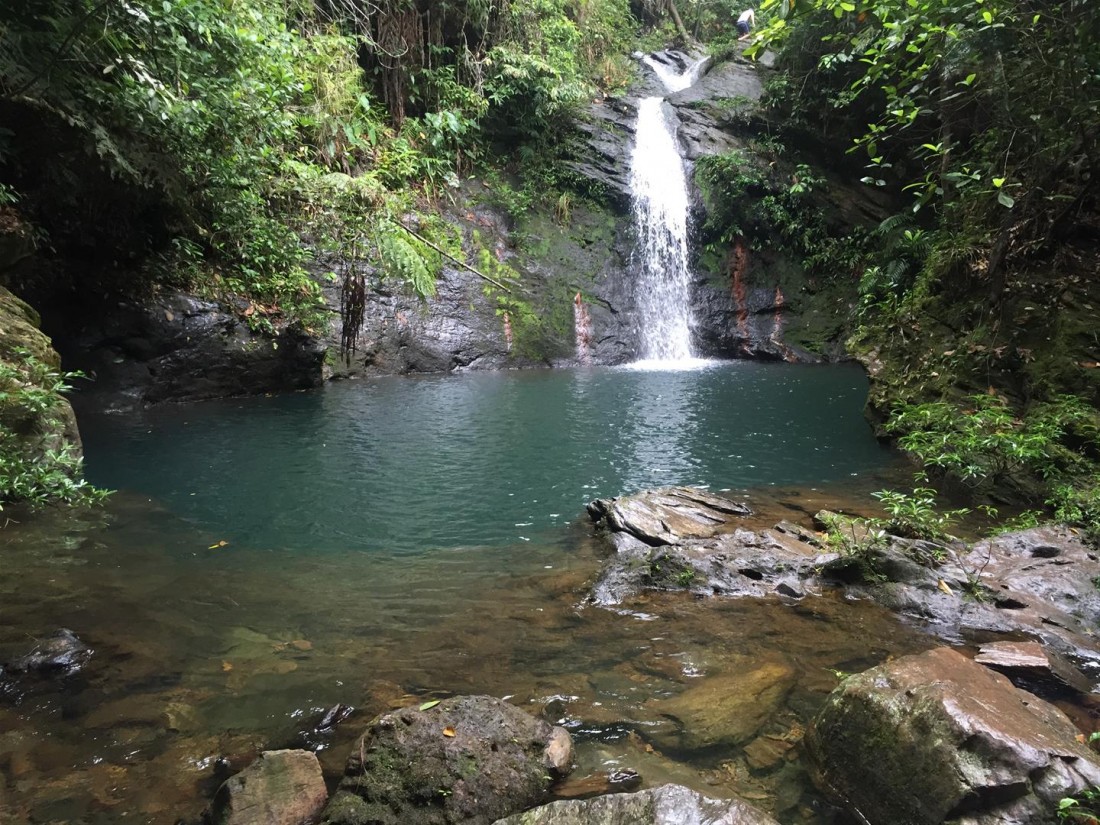 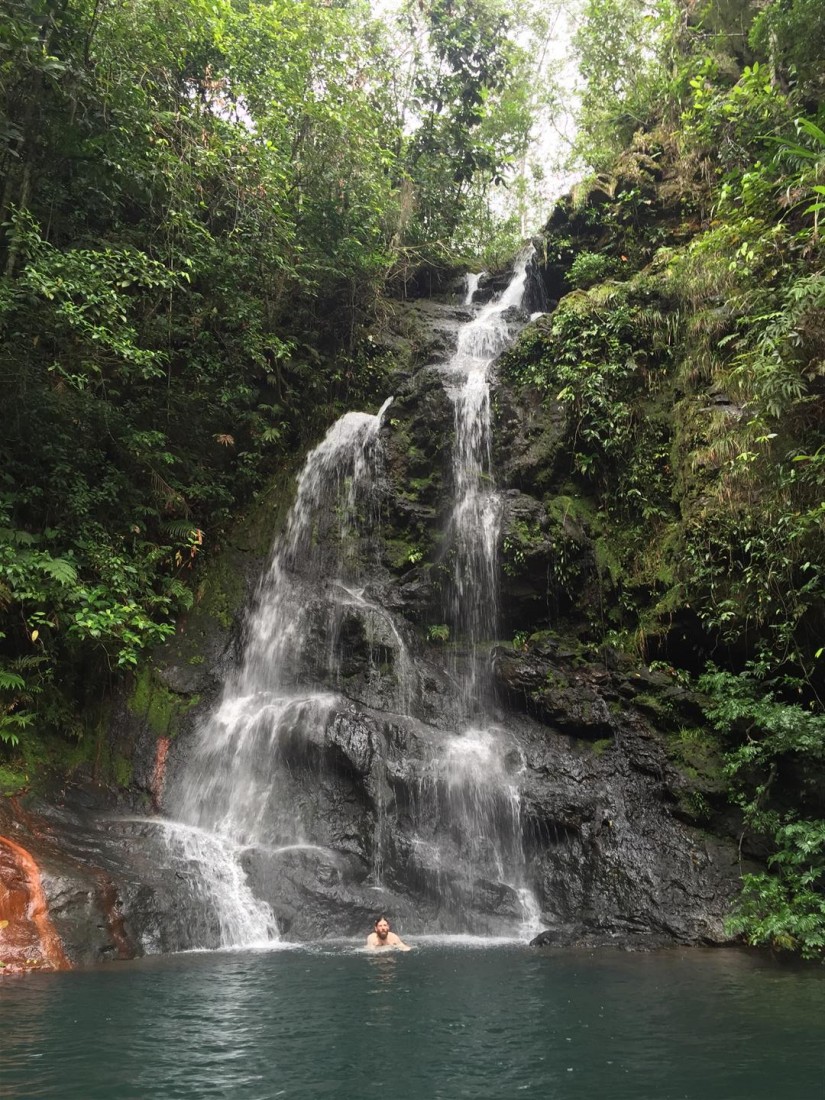 Back at the visitor’s center, we geared up and headed back out the way we came. Being that this is a Jaguar sanctuary, I was hoping to see one, but kind of glad I did not.  With my luck, I would have come between a mama and a cub just like that scene in Apocalypto. You know the scene…the face mangling one.  We ripped even harder out the road we came in since we were beginning to feel more comfortable w/ the bikes. At the fork to the main road, back to Maya Center, we took the left instead of the right that led back to the highway, and found a huge limestone quarry to play in. We also grabbed some oranges from the grove to munch on later.

The hours were closing in on sunset, so the decision was made to head back to Hopkins. We didn’t want to get stuck out at night this far from town… dark is fucking dark down here. Plus… Jaguars. I am partial to my face and do not need it mangled. Jaguars function mostly at dawn and dusk, and with dusk approaching, it was time to leave the Jungle.

Of course on the route home we took the long way via Sittee River Road. The Sittee River is a typical wetland estuary. Think Everglades or Louisiana. From what I am told, there is plenty of crocs and bioluminescent creatures in those waters.  We wound all along the river for miles, looking at all the property for sale along the way,dreaming of getting a house and land along the river and kissing the USA goodbye. It seems like EVERYTHING is for sale around here. Feeling parched we took a small break for more Belikins at the Sittee River Marina. Once we felt refreshed we headed back to Hopkins via the wet and pitted out road, soaking everything that had dried on the Sittee River cruise.  The sun was setting to our backs as we pulled into our hostel to call it a day 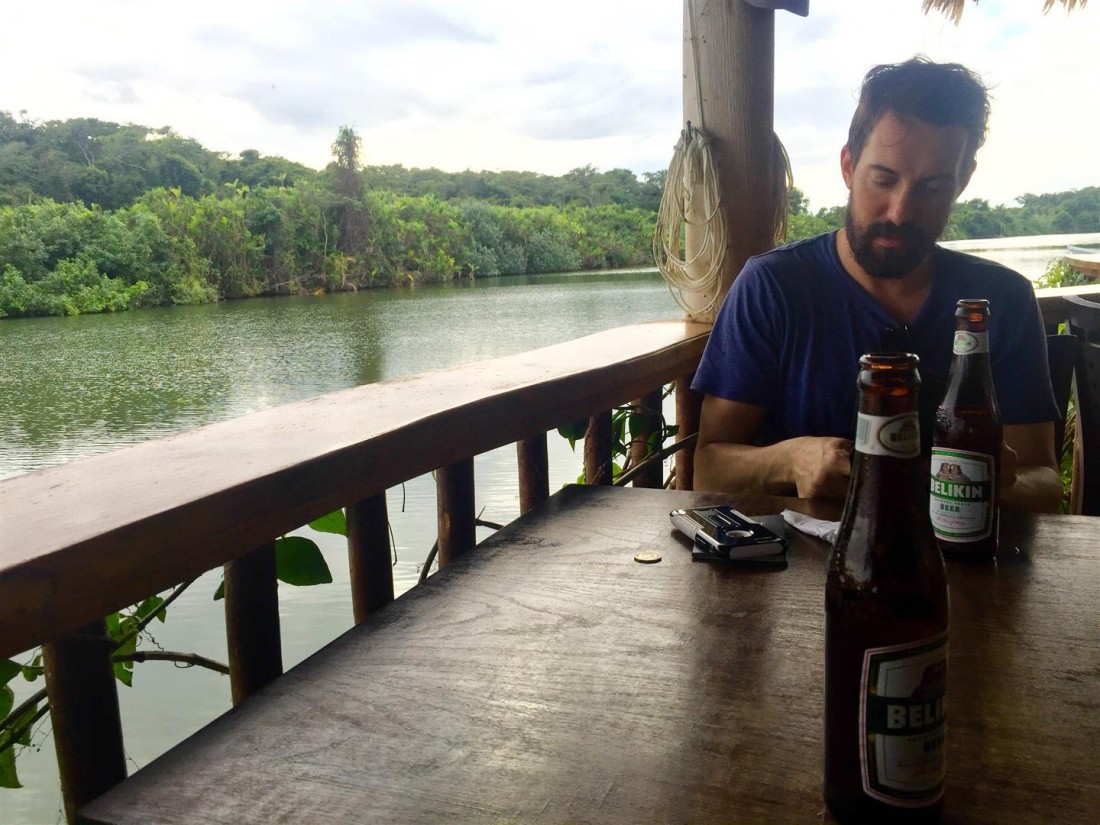 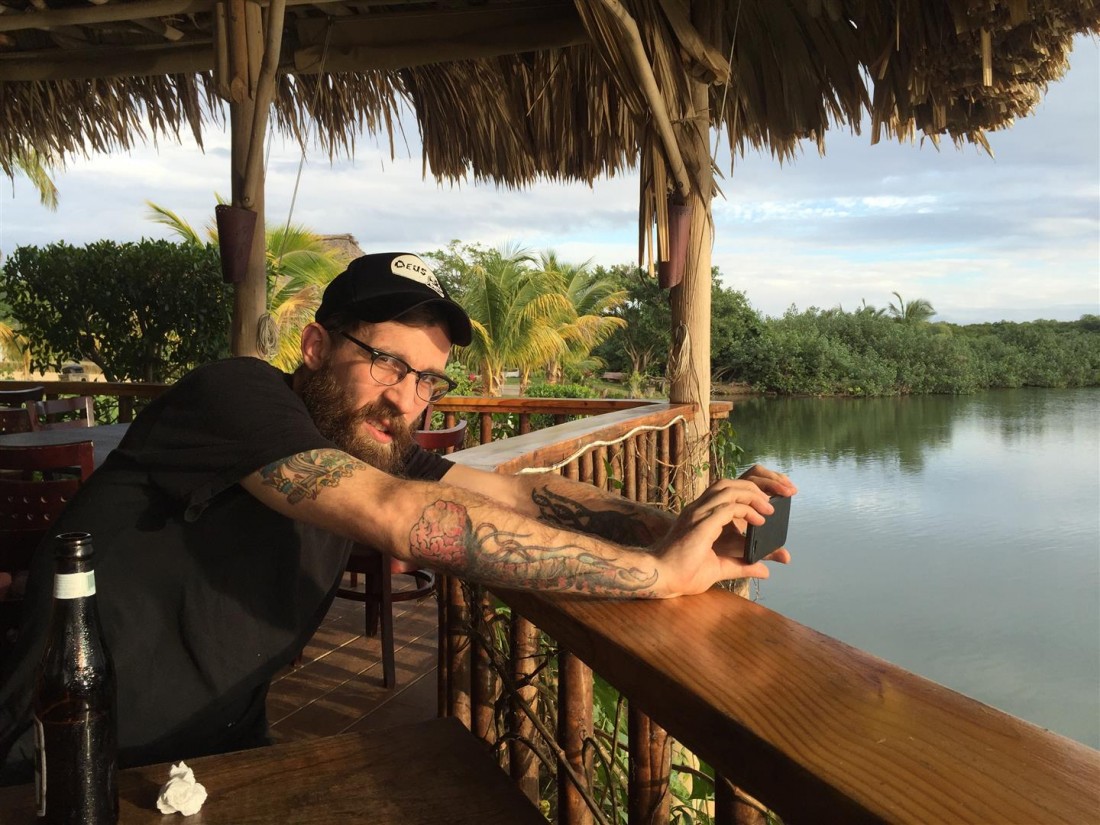 2 responses to “You Best Fuckin’ Belize It: Day One” 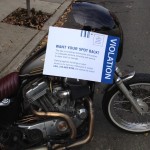 It’s full on fucking war with this broke-ass, motorcycle-hating city. As some of you may know, the PPA has begun enforcing motorcycle and scooter parking on the sidewalk, citywide! This means the old ways are dead and we have to bookend our bikes in between cars, take up a whole car space (which is totally […]